Ken Cooper went from being stuck in a wheelchair to deadlifting over 900 pounds in the span of one year. 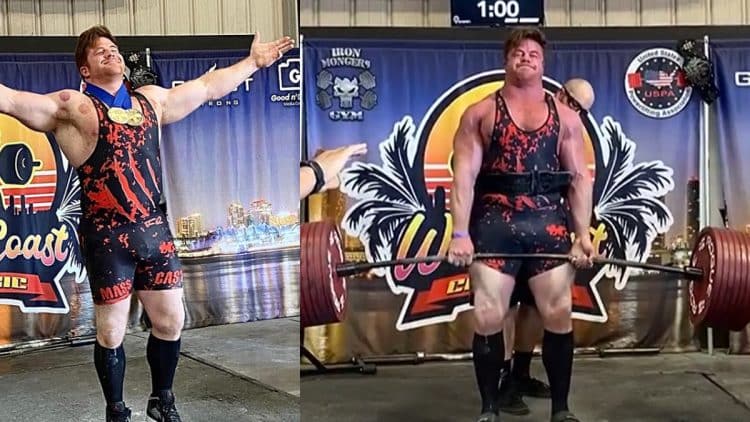 The 2022 USPA West Coast Classic took place on November 5th, in Vista, California, and everyone anticipated the comeback of Ken Cooper. As some might remember, during the last year’s edition of the USPA West Coast Classic, Ken failed his third squat attempt of 337.5 kilograms (744.1 pounds) which ended up in what seems the worst way possible. Ken injured both of his knees, having torn two tendons and torn/damaged six ligaments. This required complicated surgeries, which left Ken with around 70 stitches across both knees. He was stuck in a wheelchair and had to slowly learn how to walk again.

Ken Cooper returned almost exactly a year after his gruesome injury, appearing on the same platform that once made his life miserable. Despite his injury, he returned stronger than before. So, Ken put up the most incredible lift in the entire competition, as he deadlifted 410 kilograms (903.9 pounds). With this, Ken improved his competition PR by 12.5 kilograms (27.5 pounds) and joined the “900-pound club”.

Ken only used a lifting belt, while his technique consisted of a conventional stance and a mixed grip.

“Last year, I was taken out of this meet in an ambulance after blowing out both knees on my 3rd squat attempt. This year I came back and hit a big goal of mine… Truly a moment I’ll remember- grateful to still be able to do what I love!”

Ken Cooper also took part in the bench press event and ended up lifting 257.5 kilograms (567.7 pounds). In light of his goal to lift more, he found this a bit disappointing. Considering what his past year looked like, this was still a very good result considering it equals his competition PR. Ken did not compete in the squat event.

“I’m a little disappointed I didn’t hit my goal of 600 lbs in competition this meet… I’ll be working on more volume to acclimate myself to heavier bench weights again this off season and very much look forward to putting it all together in my next competition.”

This was just the third sanctioned powerlifting competition in which Ken Cooper took part in. Apart from the 2021 and 2022 USPA West Coast Classic contests, Ken also competed and won the 2021 USPA Liz Freel Classic Charity Event.

Since Ken Cooper has only been competing for two years, he still has a lot of room to improve. It is very likely that he will become one of the greatest deadlifters in history. He certainly possesses the dedication and mentality to achieve anything, so there will be no stopping him.

For anyone interested you can see Ken Cooper’s Terrifying Squat Incident below. This is also a TRIGGER WARNING for anyone sensitive to these types of videos, since it shows the moment when Ken suffered his severe knee injuries.