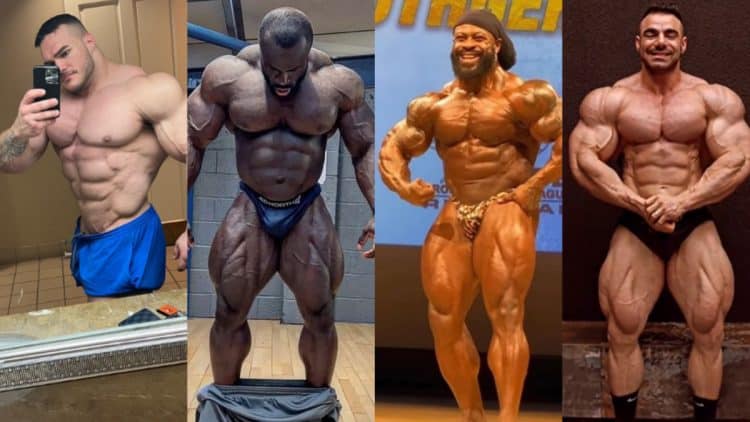 Leading the division is reigning two-time Mamdouh “Big Ramy” Elssbiay, who has held on to his title since dethroning champion Brandon Curry in 2020. Ramy has dominated at the top of his class with a combination of size, muscularity, and stage presence. He’s been vocal this season about his goal to win his third Mr. Olympia competition, assuring Olympia President Dan Solomon that he intends to show the world in December.

In spite of Ramy’s success, there are a number of threats eager to strip away his status as champion. And while some are familiar foes like Nick Walker and William Bonac, there are others who have yet to test themselves on the Olympia stage, like mass monster Samson Dauda and Rafael Brandao — a standout from Brazil with detailed separation and aesthetics.

Walker is closing in on the final stages of his prep along with the rest of the Open class. Throughout the year, “The Mutant” lived up to his moniker, showcasing near-superhuman strength during a number of training sessions. The contest is closing in, with Open competitors Walker, Dauda, Bonac, and Brandao bringing their best in hopes of seizing Ramy’s throne.

The first update shared six weeks from the contest comes from Nick Walker. He showed off a slim waist, his signature huge arms, and a full chest.

Walker didn’t take long to establish himself as one to watch in the Open class. He won back-to-back shows at the 2021 New York Pro and Arnold Classic. After placing fifth at Olympia that same year, the 28-year-old has taken the entire season to build an Olympia-winning physique. In addition to routine updates, Walker has shared countless workouts.

Some of these training sessions saw Walker challenge himself against other Men’s Open competitors. He pushed himself in workouts with Samson Dauda, Brandon Curry, Hunter Labrada, and even reigning 212 Olympia winner Derek Lunsford, who accepted a special invitation to compete in the Open at 2022 Olympia. Before taking to a stage this season, Walker expressed that his goal is to win as many Arnolds and Olympias as possible before stepping away.

In the next post shared via Instagram, bodybuilder Samson Dauda sent his competition a warning shot with a massive progress photo in contest prep.

This will be Samson’s first-ever Mr. Olympia contest. He plans to do some major damage after a successful 2021 campaign. He earned runner-up at the 2021 Arnold Classic UK and then took third place at the Yamamoto Cup. Last November, Samson earned his Olympia qualification for this year after claiming the EVLS Prague Pro title.

In 2022, Dauda remained busy and competed at the Arnold Classic and Boston Pro. Despite placing fourth at both of those contests, many, like his coach Milos Sarcev, have named him as a dark horse ahead of this year’s Olympia show. His large muscle bellies and appealing physique stands out for a bodybuilder pushing well over 300 pounds.

In a recent guest posing appearance in Germany, 2020 Arnold Classic champion William Bonac wowed the audience with one of his biggest and most conditioned packages to date.

Bonac has been open about his plan to combat Big Ramy. He believes size will be a determining factor and worked diligently this season to add meaningful improvements to his physique. In order to gain adequate mass to battle Ramy, Bonac shared a 5-meal bulking diet he utilized throughout the season.

“The Conqueror” proved his doubters wrong earlier this year when he placed runner-up to Brandon Curry at the 2022 Arnold Classic. Undeterred by the loss, Bonac won the Men’s Open title at the Boston Pro a week later. This victory earned him his 2022 Olympia invitation.

In a post made to Instagram, Rafael Brandao showed off his shredded, balanced, and aesthetic build six weeks from this year’s Olympia. He hit two variations of the most muscular pose, starting with a hands-clasped and then to a hands-on-hips.

Brandao will be making his first attempt at a Mr. Olympia contest later this year. In 2021, he took home the honor of being crowned the Romania Muscle Fest Pro winner. After making improvements over the months, Brandao won the 2022 Arnold Classic South America in May.

Rafael has trained in the company of seven-time 212 Olympia champ Flex Lewis and has ambitions to make his first Olympia appearance one to remember. Many believe his blend of aesthetics and size make him a problem on stage.

There is no shortage of contenders for this year’s Olympia contest. Newcomers Andrew Jacked and Michal Krizo have also stamped their tickets to compete at the event. And of course, the top five heavy hitters from last year, Walker included, will be eager to improve their standing from their last time on the Olympia stage.

All of these athletes have taken different paths to reach bodybuilding’s most prominent event but will battle for the same prize. Considering the new talent and physique updates of Walker, Dauda, Bonac, and Brandao, this year’s contest is shaping up to be extremely competitive.