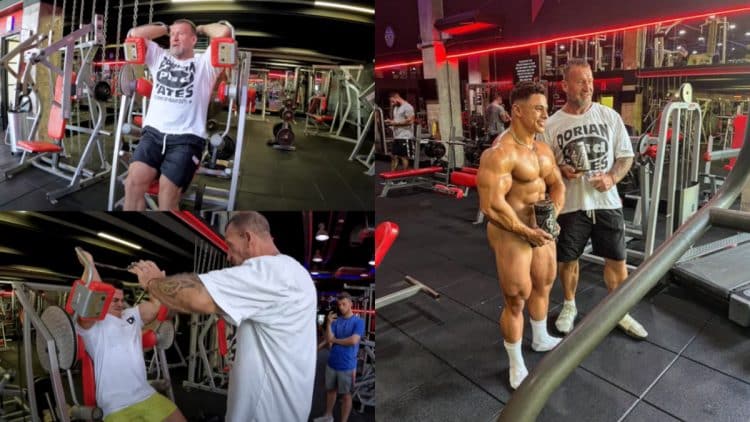 Dorian Yates carved out one of the most successful IFBB careers the sport has seen when he dominated the Olympia contest from 1992-1997. In a pair of recent videos, Yates met with Junior Mr. Universe Kaya Yusuf for a brutal back training session and a posing routine.

“One step at a time because the back is the hardest part of the body to train actually. Even for Pros, they’re not all training properly,” Dorian Yates told Yusuf.

During his reign, Dorian Yates made a career out of his wide back. As his most notable weapon, Yates’ back combined with his conditioning proved to be the kryptonite for many of his opponents. He took on names like Shawn Ray, eight-time Olympia winner Lee Haney, Kevin Levrone, and Lee Priest. Dorian was accustomed to testing himself against the best.

He reached the top of the sport with a straightforward approach to training. For much of his career, Yates always pushed himself to near failure with demanding workouts. Yates’ intense style of training is utilized by some today. However, even the six-time Mr. Olympia has suggested he would have gone easier on himself if he could go back in time.

Making the most of his retirement, Yates sports a jacked physique at 60. When he’s not pursuing his own fitness goals, Yates enjoys walking others through some of his rigorous training programs.

In August, “The Shadow” teamed up with fitness model Mike Thurston for a chest and biceps workout. Similar to the strategies that helped him find success during his prime, Yates implored Thurston to focus on going to near failure instead of a fixed number of reps or sets.

This time, he’s joining forces with Kaya Yusuf, a former Junior Mr. Universe winner and Classic Physique amateur bodybuilder. Yates guided the up-and-comer through a taxing back workout and finished up the day by offering some posing tips.

Dorian Yates Led Kaya Yusuf Through an Olympia-Caliber Back Workout

In a video published to YouTube, Yates and Yusuf take on an intense back workout. You can find the full exercise list below.

Before getting to the bulk of the workout, Yusuf performed a set of pull ups.

Yates laid out his expectations for the back workout with Yusuf.

At the top it doesn’t matter, I don’t care what you do there, but when you come down, pull, and contract, there should be a slight arch. Any movement,” Yates said. “It’s not argument. It’s just fact. Look it up.”

“It’s important that you get this connection in your mind and to the muscle. What does it do? Well, it brings the upper arms around and back. Down and back.”

During the pullover machine portion of the workout, Yates told Yusuf to get a full range of motion and drive downward for the best results.

Yates pushed Kaya to near failure for the last few reps.

Yusuf, still being guided by Yates, wrapped up the training session with barbell rows. Yates told Yusuf to remember the tip he gave him earlier about arching the spine while performing lifts.

“Just a little tip at the head, you know, that’s what we were discussing earlier. The spine needs to be a little bit arched, and if you put the head down and look at the floor, what happens, the body goes with it yeah.”

Keep your head up and try to arch your back, you can’t do it, it doesn’t work. That’s a good tip to help you maintain your position. Make sure there’s no body or no leg movement, same as the last set,” Dorian Yates said.

Yates explained the difficulty of hitting certain poses during the off-season, specifically side poses. The six-time Mr. Olympia winner praised Yusuf’s physique and said he didn’t have a clear weak body part while posing.

In addition to sharing workouts and helping shape rising talent in the NPC/IFBB leagues, Yates is dedicated to preserving his own health after a lengthy career. He recently discussed his favorite bodybuilding cycle as well as his current treatment plan. The 60-year-old revealed that he is micro-doses testosterone nowadays which he specified comes to about 200 milligrams every ten days.

RELATED: Tom Platz Reflects on Training ‘Unknown’ Dorian Yates: “He Surpassed Everything I Taught Him”

Despite stepping away from competing, Yates hasn’t slowed down, especially when it comes to training rising talent. Counting the warm up, Yates’ near-failure back workout routine featured four exercises, and they finished with a detailed posing routine.

You can watch the full workout below: