After a powerlifter set a PR, he dropped the barbell on his next lift but Larry Wheels spotted him and helped him avoid injury. 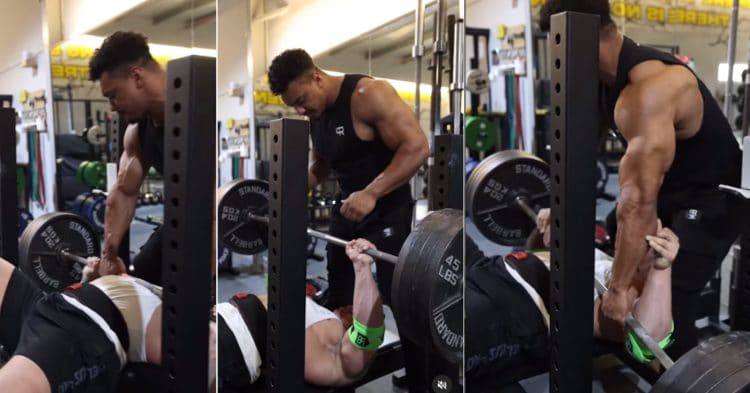 Larry Wheels is always trying to improve upon his powerlifting expertise. Recently Wheels spotted Mike Edwards on the bench press only for the barbell to fall on Edwards’ chest as Wheels scurried to save him from catastrophic damage.

Larry Wheels is a known force in powerlifting. Throughout his storied career, Wheels amassed numerous personal records and accomplishments. As of late, the powerlifter has gone back and forth with former strongman and Game Of Thrones star, Hafþór Björnsson. After Wheels accepted a challenge from Björnsson to bench press 440lbs for 20-reps, he exceeded expectations and hit 23-reps at 440lbs instead.

While the joys of powerlifting are evident in the accolades these athletes achieve, there is always a give and take in sports. Powerlifting comes with its drawbacks, the main one being injuries.

Last April an incident somewhat similar to this one occurred and Larry Wheels was present for the mayhem. Bodybuilder Ryan Crowley sustained a career-threatening injury to his pectoral muscle. The damage was extensive and if not for Larry Wheels, Crowley believes he might have not survived the harrowing accident. After the horrific injury, Larry Wheels took to Instagram and started a GoFundMe page to help his friend with the demanding medical costs.

RELATED: Larry Wheels Injured During Huge Squat: ‘I Ripped My Quad In Half”

While Crowley attributes the accident to excessive stretching and a bad warm-up, the bodybuilder maintains that without Larry Wheels there to spot him, the results of the accident easily could have been life-threatening. Meanwhile, it appears the powerlifter who was assisted by Wheels looks to be in much better condition following the accident.

After sharing the video on Instagram, Larry Wheels indicated in the comment section that the accident occurred right after Mike Edwards hit a bench press PR of 530lbs. During the clip, it looks as though Edwards may have lost his grip with the bar slipping out of his hand — he was not wearing wrist wraps. Judging by the plates on his barbell (8) at 45lbs each, it would seem the total raw lift equates to roughly 360lbs.

“Can you believe he escaped from this injury free?” Larry Wheels shared.

It will take time to find out if Mike Edwards sustained lasting damage. However, it’s safe to say he’s feeling a lot better than most would have believed him to be just hours after the accident. Edwards, a certified fitness trainer, and powerlifter is thankful for Wheels’ help.

The pair of powerlifters took to Instagram for a quick pose, which all but verifies that Mike Edwards wasn’t seriously injured.

Thankfully the damage appears to be less severe with Mike Edwards compared to the Ryan Crowley incident. Gym accidents are a common occurrence and hard to avoid. With strength athletes pushing their bodies to physical extremes, it’s essential to have a spotter for safe practices.

Bench pressing has long been considered a potentially dangerous exercise. Edwards hit a PR of 530lbs on the bench press, despite losing his grip on a subsequent lift, he had a seasoned powerlifting veteran available to spot and assist him during the accident.