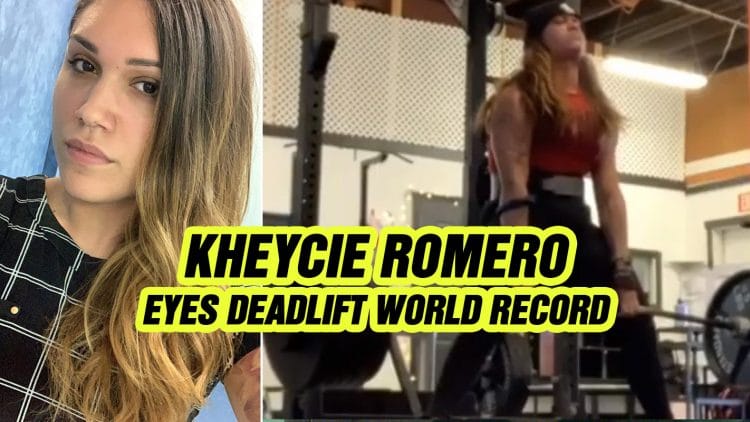 Most of us are worried about losing muscle and gaining fat during this period of not being able to go to the gym. Not Kheycie Romero though, who instead told FitnessVolt that she has actually found herself gaining muscle mass, even without being able to train like normal.

Romero is proving herself to be quite the competent powerlifter over the last few years. At just 26 years old, she has already found herself three years into her career, with plenty of eyes on her. Although the attention is deserved, as she has shown, not just in competition, but with her efforts in the training room as well.

Just a few months ago, Kheycie Romero was competing at the Hybrid Showdown II, in the 198lb weight class. Although she walked away with the victory, she had a disappointing performance, in terms of her deadlift. She went 1/3, getting tripped up on a 573lb effort.

However, since that meet, Kheycie has gone on to hit unofficial world records for that deadlift, posting them to Instagram. She has blown those numbers out of the water, going as heavy as a hefty 635lb lift in training. Speaking exclusively with FitnessVolt, she explained what went wrong in February, and shared her plans to break the all-time world record the next time she competes.

“(I want to go for) at least the world record for the 198 or 198+ class, which is either 602lb or 607lb. So I definitely feel like I should be able to get those, especially since I’ve been training my hook grip now. So I would really like to get either of those, or even go for the all-time world record, which has to be more than 622.

“At the Hybrid,” Kheycie continued. “I ended up doing mixed grip, which kind of throws me off, and pitches me forward. Since I’m used to training with straps, it’s pretty much the same as hook grip. Had I stuck with hook grip for the meet, I could’ve potentially gotten the 573, and who knows if it could have been better than that. I know my mixed grip can make a huge difference. It can make do a lot less, just because the positioning is really different than my straps.”

Romero went on to explain that she is also working on leaning out right now. She said that she has put on some weight lately, but getting trimmed down will boost her competitive drive. Moreover, she feels that this will push her to take her powerlifting game to the next level.

Surprisingly, Kheycie says that she has been putting on some muscle mass during this off time, rather than losing it like most of us. Therefore she is just really working on her diet and in getting her weight lower. While she spends most of her time working with friends now that gyms are closed, her priorities have changed, in terms of training.

“Since I’ve been going heavy so often, it’s okay for me to take kind of a break from all that heavy weight anyway,” She says. “So I’m just focusing more on mobility, the little things that I might have neglected when I had the opportunity to go heavy as often as I did. So yeah, I’m mostly improving on mobility, which will help me when I do start lifting heavy again. Working with lighter weights and doing higher repetition work to focus on hypertrophy, just to bring up body parts that weren’t as conditioned as they could have been.

“I can see actual growth too, from bringing in more volume with the lower weights, doing kind of bodybuilding focused things. I think it’s going to pay off in the long run, because it’s things that should have been done.”

No stranger to bodybuilding exercises, Kheycie Romero actually started her athletic career as a Bikini competitor. However, with her focus now being on losing some weight, she has to make some adjustments to her diet. The main focus has been on simply lowering her calorie intake.

“For the most part it has been just decreasing my intake, because my intake was definitely pretty high. I think I was around 3,000 (calories), sometimes it would be 3,100 or 3,200. Honestly, it was just all over the place. I had no pattern, there was no control over it. That’s why my weight was kind of all over the place. So now it’s just  decreasing by about 400 calories from what I expect my TDEE (Total Daily Energy Expenditure) to be, having higher protein, lower fats, and moderately high carbs. The deficit alone should help to cut the weight, and higher protein just maintains the muscle that I have.”

Although she is not working with a dietician, Kheycie feels that she has built up enough nutrition knowledge to perform at the level she needs to. Furthermore, she knows herself well enough to realize that having as few options as possible will keep her diet strict. Therefore she mostly keeps her meal plan to a consistent mix of protein bars and shakes, and four meals of chicken and rice.

With such a scientific approach to her diet and nutrition, you might think that Kheycie Romero is a certified trainer. However, she in fact graduated from the University of South Florida, with a degree in statistics. Interestingly enough though, this had been able to help give her a different, more clinical outlook on training.

“I’ve always been like a really big math person,” Romero said. “So I’m definitely very analytical, and the way I program is different. I think the reason I say I don’t program like normal people is because I’m very analytical. Everything is literally formulated. The people that peak and stuff, I just look at my programing differently. So yeah, math definetly plays a big part in that, and I think that I program that way because of the fact I spent so many years analyzing numbers.”

Most 26-year-olds are partying or hanging out with friends, but not Kheycie Romero. She has instead chosen to delve into the powerlifting lifestyle, spending most of her time training, or coaching others. She might eventually try to make a career from coaching, but for now, she is focused on her own career, which seems to be quite promising.

You can check out our full interview below: