How To Do The Kipping Muscle-Up – Benefits, Alternatives and Muscles Worked

Kipping muscle ups are the most efficient way to get up and over a bar or rings. Learn how to do them in this guide. 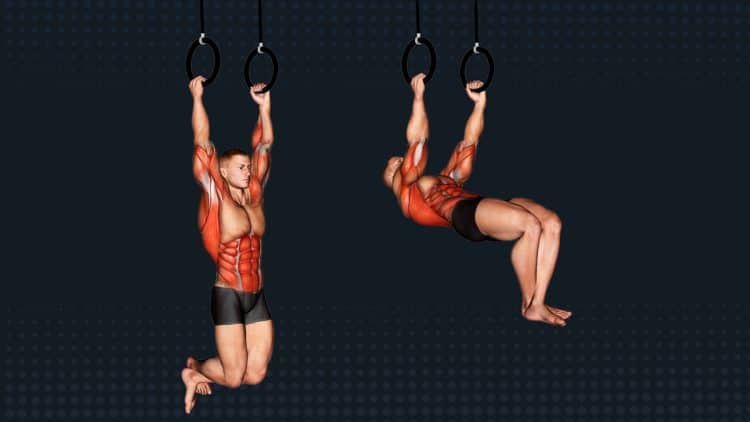 Much like the popular CrossFit-based kipping pull-up, the kipping muscle up is a technique used to complete more work (timed workouts) in less time. This multi-movement exercise involves various elements strategically performed to create the momentum to propel you up and over a bar or rings and into a full bodyweight dip.

How To Do The Kipping Muscle Up

The kipping muscle up is not a beginner movement as it requires decent upper body strength, flexibility, coordination, and proper technique. That being said, it may take some practice to get the hang of (pun intended) even for more experienced exercisers.

Kipping muscle ups require a sturdy bar, enough swinging room, and plenty of overhead space to avoid hitting your head on the ceiling. If you’re looking for a good pull-up bar setup, we recommend the follow options.

Below we’ve included detailed step-by-step instructions for the kipping muscle up.

The Kip swing is a CrossFit technique used to create momentum to help propel the body up and over the bar. The motion is initiated using the shoulders and hips to alternate between hollow and arched body positions.

This portion of the movement is crucial because you have to generate enough momentum using proper body mechanics to get yourself completely up and above the bar.

Practice swinging back and forth between hollow and arched body positions to get comfortable with the movement.

Step 3: Pullup transition to a dip

Now that you’ve got the swing down pat, it’s time for the pullup phase. Before you can effectively launch up and over the bar, there a few key points to remember – keep the arms fully locked out, lean back, and push the bar down into the hips.

Ideally, you can visit a gym that teaches these types of movements, but we understand that this is not possible for everyone.

Here’s a simple video demonstration of the kipping muscle-up.

If you prefer a more in-depth tutorial, check out the video provided below.

Kipping Muscle Up Tips and Tricks

Below we’ve explained some of the tips and tricks mentioned in the video tutorial above.

Kipping muscle ups involve alternating between a closed and open hip angle during both the kip swing and transition up and over the bar.

To practice the closed and open hip movements:

Practice as many times as needed.

Another part of kipping muscle ups that you must get right is mimicking a lat pullover and not a traditional pullup. As you swing back and up toward the bar, keep the arms long until you must bend the elbows to sit up and over it.

Understanding how to engage ad maintain lat control as you push and pull on the bar will help to generate enough momentum and create sufficient room to effectively transition above the bar. It’s also important for the safety of your joints and muscles.

Lat pullovers using a cable machine is a great way to train and reinforce lat engagement during kipping muscle ups. But if you want to train the same movement on a bar, we like the front lever raise. Although it’s not as easy as you cannot adjust the resistance.

If done safely and efficiently, kipping muscle ups can be a beneficial workout.

The most obvious benefit of kipping muscle ups is that it works all of the upper body and core muscles. Your core is active throughout the movement to stabilize your trunk while the pullup engages the back muscles and the dip works the chest, shoulders and triceps.

Kipping muscle ups are also an explosive movement which means you have to generate a lot of force using the upper body muscles.

The kipping muscle up isn’t like a biceps curl. It’s a total body movement that requires coordination and participation of the legs, hips, core, back, shoulders, chest, and triceps muscles.

Most exercises are challenging because of the weight or level of exertion. But we as humans often like different types of challenges too (possibly our innate primal instincts to lift ourselves up and over an object). Kipping muscle ups perfectly fit this desire.

Let’s be honest, you’re not doing kipping muscle ups without already possessing a Hulk-like grip. Many people can’t even dead hang for a few seconds because of a weak grip. But one of the ways that you build a stronger grip is by doing exercises that require you to hold a bar and face resistance.

It’s only fair to include the drawbacks too.

Not for beginners or intermediates

The kipping muscle up is a somewhat complex movement that involves various elements. Of course it can be learned with practice but not a good idea for someone who plans to jump right into it without similar training experience. Start slow and learn the basics before progressing to the full movement.

It’s also not a good idea to practice kipping muscles ups everyday as they can be taxing on your joints.

There are two things that make this movement more risky than others – using momentum and propelling yourself up and over a pullup bar. Make sure you don’t have any lingering shoulder or joint issues before attempting this movement.

It’s also a good idea to warmup beforehand with calisthenics and pullups.

Can jack up your hands

Spinning your hands around a bar over and over again can cause the skin to peel and bleed which is painful. It’s a good idea to use chalk or something similar to protect your hands.

4 Kipping Muscle Up Variations and Alternatives

The kipping muscle up is a CrossFit style movement that serves a specific purpose as previously mentioned. But these variations and alternatives are also great to include in your training.

Rings muscle up have advantages and disadvantages compared to the bar muscle up and it’s also used for CrossFit training. One drawback is the instability of moving rings. Although if you’re experienced with rings it shouldn’t be a problem. The advantage of using rings is that you can move your arms and hands more freely which may feel more natural.

Watch the video below for a demonstration of kipping ring muscle ups.

Kipping pullups are very similar to kipping muscle ups except you’re not trying to launch up and over a bar. You’ll essentially use the same kip swing technique and just pull your chin up above the bar.

The basic pullup is undoubtedly the king of upper body bodyweight exercises. In one Ace-sponsored study comparing many of the best back exercises, the pullup (overhand grip) ranked above the others when it came to activation of the lat muscles (1).

Well, these are important pulling muscles, and a key element of the kipping muscle up.

Check out our complete guide to the strict bar muscle up with more variations here.

Kipping muscle ups involve several muscles from your head to your toes. Learn about the anatomy and function of each one so that you can plan your training program and recovery accordingly.

If you want a muscular and impressive back then you should include pulling movement to work the largest back muscle – latissimus dorsi. While it has several functions, movements that place your arms overhead are the best way to activate this muscle group.

The “invisible muscle”, most people don’t even know what the brachialis is or what it does in the upper arm. Brachialis is located roughly halfway up on the lateral part of the upper arm and it crosses the elbow joint, hence it’s role as a pure elbow flexor.

Similar to the brachialis muscle, the brachioradialis flexes the arm at the elbow and turns the forearm in either direction (palms down and up). The more pulling movements you do the better developed your brachioradialis will be and it contributes a lot to the appearance of your lower arm.

Also known as the front delts, the anterior deltoids can flex the arm forward (e.g., reaching up to grab a pull-up bar.

The lateral deltoids are between the front and back shoulder muscles on the side of the body. Hence why their main function is abduction the arms laterally away from the body between 15-100 degrees.

The triceps are involved at the top of the kipping muscle up when you complete the press and support your bodyweight. This is also known as elbow extension and all three heads of the triceps participate in this action.

Smash your WODS, mix up your training, and earn bragging rights by incorporating the kipping muscle up into your training. This multi-move technique not only allows you to get up and over a bar or rings as quickly and efficiently as possible but there are lots of other amazing benefits too.

This comprehensive guide should help you to get started with step-by-step and video instruction, plus tips, tricks, and more.