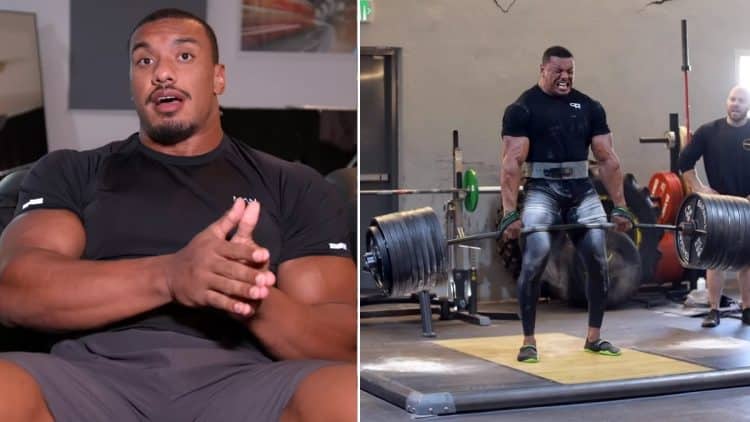 Larry Wheels is known as one of the strongest men in the world because of the breath-taking feats of strength he performs. However, he has never attempted to deceive anyone into believing that he performed these accomplishments as a natural athlete. Despite Wheels’ openness when it came to his use of steroids and PEDs (Performance Enhancing Drugs), it became evident recently that he was pushing the limits, putting himself at risk for further injury and lasting damage.

Most recently, Larry Wheels injured his back because of rushing a process, which he hoped would help him deadlift 1,000 pounds (453.6 kilograms). The injury also forced him to withdraw from the 2022 Middle East’s Strongest Man contest. However, despite this deadlift being his greatest goal in life, the injury helped Larry realize how important his health is. So, he decided to stop using Steroids and will now try to maximize his off-cycle potential. The news was revealed in a new YouTube video that Larry posted on August 20th.

Having used steroids and PEDs for a decade, Larry Wheels describes his experience with them. Larry’s use of these substances for such a long time has left some consequences, which affected his natural testosterone production.

“Much like you don’t know, I don’t know what I am capable of off-cycle. Now, going completely off isn’t an option for me. I cannot produce testosterone naturally. So, I am going to be on testosterone replacement therapy (TRT). I tried pull cycle therapy several times when I began cycling and I was unable to recover.”

So Larry Wheels will no longer use steroids or performance-enhancing drugs, but since his body cannot produce testosterone on its own, he will have to undergo testosterone replacement therapy to reach a normal testosterone level. Having taken inspiration from a fellow YouTuber and fitness enthusiast, Derek from “More Plates More Dates”, he already has an idea of what he wants to do.

“TRT for me would be anywhere from as low as 70 milligrams per week, as high as 175… I think 175 is a good place for me to start. If I speak with my doctor and we get my bloods done and we see that it’s more than what’s necessary then I will decrease it, but I certainly won’t increase it.”

Wheels has been looking for a way to lift 1,000 pounds (453.6 kilograms) for some time now, and he does not appear to be giving up just yet. Currently, however, he will not be looking to do so since it is almost impossible to do so without the aid of performance-enhancing drugs. Larry has hinted that he may get back on PEDs in the future to deadlift 1,000 pounds, but it won’t happen anytime soon.

“I am not calling quits on it, but I am putting the brakes on attempting PRs like that at the moment… Why do I have to do it right now? I am 27, I can take my time, it can be several years from now. I’ll still be in my prime. I’ll still be healthy.”

It is likely that Larry Wheels’ greatest achievement in life will be deadlifting 1,000 pounds. This means that it cannot be easy and that it should not be rushed either. It’s time for Larry to take care of his health and see what he can accomplish without the use of steroids in the future.

“Seeing what I’m capable of on TRT is more of a priority to me. It’s more exciting. It makes me feel invigorated… I don’t know how I will perform without the assistance (steroids), because the fact of the matter is that PEDs make a tremendous difference in your physique, strength, psyche, recovery more than the general population understands.”

Now that he’s off PEDs, Larry Wheels will have to focus on his training, diet, recovery, and a whole lot more. He also does not plan to jump back on steroids and PEDs in the near future.

Related: Larry Wheels Shows Off Huge Back After Deadlifting 300-kg (661-lb) For 72 Reps

Whether this goal will be achieved by him, in the long run, can only be determined by time. However, Larry Wheels has never been one to give up on a challenge, as evidenced by the impressive lifts he’s performed over the years.  It is exciting to watch him take on something new and challenging, despite the fact that it may be different from his previous endeavors.

He now wants to check out how different his deadlift program will be now that he is no longer on steroids. He will also regularly put out updates and training videos, so his transparency could help everyone understand the process he is going through. There is a lot to learn from Larry’s experience, so it is exciting to envision what the future holds for him.

How To Do The Kipping Muscle-Up – Benefits, Alternatives and Muscles Worked