Kirill Tereshin Gets Synthol Injected Into His Cheeks 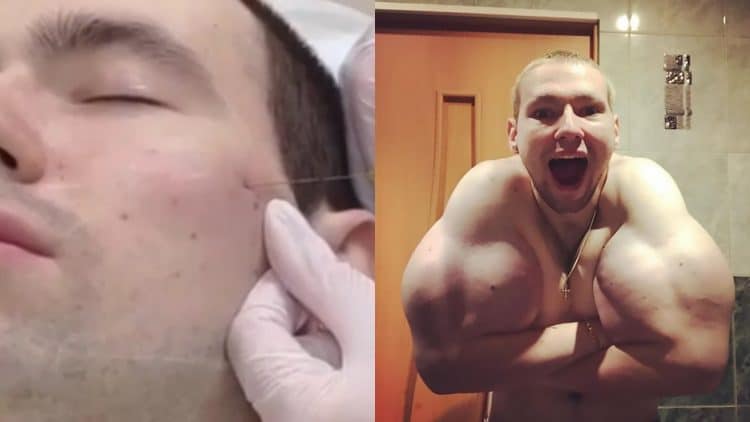 Despite knowing the health risks it poses, Kirill Tereshin is back to his old ways. This time however, the “Synthol Kid” did not inject his arms, instead taking the needle to his face.

Tereshin has gained some level of internet notoriety over the years. He first rose to prominence due to his near-cartoonish use of Synthol. He had his biceps injected with the synthetic oil substance, often used in bodybuilding, which caused them to stick out ridiculously from his skinny frame. As a result, he was garnered the nickname of the “Synthol Kid” or the real-life Popeye.

Following this initial burst of virality, Tereshin continued to search for ways to boost his profile. This got to the point, where he was even forced to get surgery to remove the injections, due to suffering health complications. Subsequently, he was warned that continued use of Synthol could cause serious damage.

Despite these warnings, Kirill Tereshin still decided to get more injections. Most recently, he decided to try getting the procedure done on a different body part. A news report shows him getting Synthol put into his cheeks!

Check out some images of the procedure!

When Tereshin was getting surgery to remove his previous implants, it was revealed that he had not used typical Synthol, instead opting for a petroleum jelly based substance. Hopefully he did not make this same mistake again, because that was the primary source of the troubling medical concerns.

It is hard to understand the fascination Kirill Tereshin has with using Synthol. As he learned when trying to do MMA, it provides no actual strength or benefits. It is something that is only a visual thing, and that is apparently all the “Synthol Kid” is actually looking to do.