Torch your midsection with this superior functional core exercise. 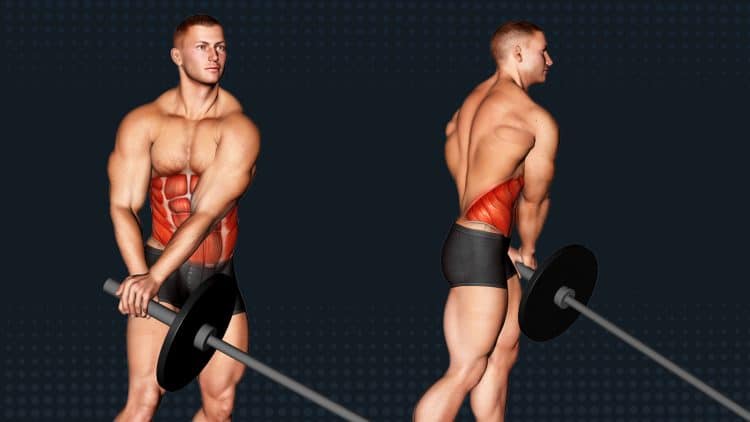 Crunches, leg raises, and planks all have their place in an ab-building regime, but so do the more unconventional exercises like landmine 180s. Sure, we all want to have a shredded midriff for shirtless summer activities. But if you want a strong and functional core, then it’s important to train on your feet. Landmine 180s are a dynamic exercise that challenges your core muscles and entire body as it functions in the real world, which is why this movement is so effective.

Below we’ve included step-by-step instructions and a comprehensive yet brief video tutorial for proper execution of landmine 180s.

Note: If you don’t have access to a landmine setup, there are a few other ways to secure one end of the bar as explained via the video below.

Check out the video tutorial below…

Landmine 180s are not a complex movement, however, you want to do them properly to ensure your core gets a thorough workout. Here are some things to remember for optimal gains.

One mistake that should be avoided is swinging the bar back and forth with very little control. Not only does this increase the risk for injuries but it makes the exercise much less effective.

Perform each rep at a slow pace and focus on the mind/muscle connection to engage your core muscles.

At no point during the exercise should your lower body turn in either direction. Keep your feet planted and only allow the upper body to rotate into the movement as shown in the video example.

Let’s talk about the benefits and muscles worked during landmine 180s.

While bodyweight ab exercises can build and strengthen the core muscles, weighted variations are typically the most challenging overall, especially if you’re continually increasing the resistance. Bodyweight movements can become too easy after a while and doing tons of reps is not as beneficial after a certain point.

You can load landmine 180s relatively heavy but be careful to not strain and only lift what you’re able to.

Unlike crunches and many ab isolation exercises, landmine 180s involve every muscle in your body, from deadlifting the weight up to pressing it overhead and resisting the rotational forces of a moving weighted bar during the exercise.

Training on your feet and involving your upper body helps to promote total-body stability, joint stability, neuromuscular coordination, and balance. It also has carryover to other lifts, athletic activities, and everyday physical tasks.

Landmine 180s are a great total-body movement, however, some muscles benefit more than others.

Landmine 180s involve the core group of muscles that each contribute to a different function.

The deltoids or shoulder muscles consist of three heads – anterior (front), lateral (side) and posterior (rear). Shoulders along with rotator cuffs are responsible for lifting the arms up above (flexion), and behind the body (extension).

While landmine 180s are as badass as it gets, we also like these landmine core exercise variations.

You can do a similar variation on your butt, with the landmine Russian twist. This exercise is challenging because you sit on the floor and swing the bar left and right while holding your legs up off the ground. In a way, it’s more difficult than landmine 180s because you don’t have a solid base with your feet on the floor. So the core muscles have to stabilize to maintain your balance.

Another challenging variation is the half kneeling landmine 180. It places the body in a different position changing some of how the demand is placed on your core. Simple get on one knee while the opposite foot is planted on the floor and execute the movement exactly the same.

To really light your quads on fire, perform the exercise while in a squat position with the upper legs parallel to the floor.

How To Include Landmine 180s In Your Training

While there’s no picture perfect strategy for including landmine 180s in your ab workouts, we can recommend a few ways to make them work for you.

If you have the means to do so, landmine 180s can make a great addition to an abs circuit workout. You’ll choose several exercise and perform the back to back with little to no rest in between. It’s a great way to get your heart rate up, burn calories, and complete a workout in less time.

The landmine 180 combines resistance training and cardio which makes it a great high-intensity interval training (HIIT) exercise. Set a timer and do three rounds of landmine 180s at a moderate tempo for 30 seconds, and you’ll feel the burn!

One of the best ways to include landmine 180s in your workouts is after a training session when you’re core muscles are exhausted from compound lifts. Do two three sets until you cannot go anymore.

Now that you’re more familiar with landmine 180s, it’s time to include this underrated core-building exercise in your training. Remember to start light and get your body adjusted to the movement, then ramp up the intensity and take your ab gains to the next level.