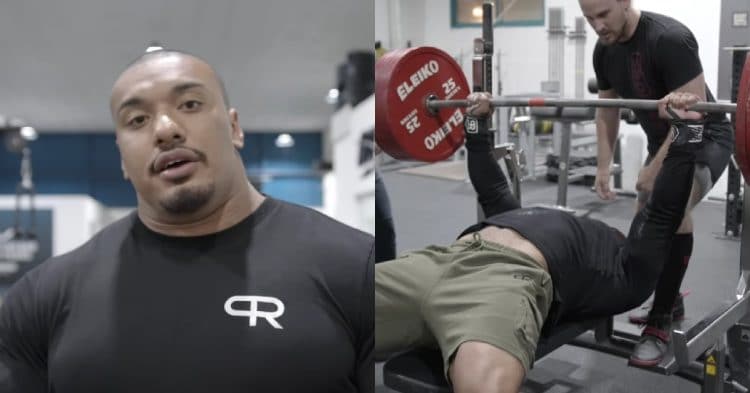 Larry Wheels has been working hard in preparation for the XPC Powerlifting Meet at the Arnold Sports Festival. Ahead of the contest, he gave more glimpses of his prep, which included a massive bench press.

Wheels is many things: strongman, bodybuilder, powerlifter, the personal record wrecking machine; he does it all. At almost every step of the way, he looks better and better. The only problem is, he oftentimes finds himself peaking before a competition, and not having the best performance he can on stage.

That is why Wheels has been looking to make some changes ahead of the XPC Powerlifting Meet. He has already detailed the way he changed up his anabolic steroid usage, to adjust for peaking early. Although he initially looked weaker than some expected, he really began to turn things up as the weeks dwindle away.

A recent video that Larry Wheels uploaded to YouTube shows exactly how rapidly he has been improving. In the video, he shows a gym session from two weeks away from the contest. Here, he managed to hit an unbelievable 650lb strict bench press.

“This is the last heavy training cycle of this training prep,” Wheels explained. “After this workout, I’ll just be doing squats, bench, and deadlift workouts, but it just be against bands. Keep my central nervous system primed and ready for the big day.”

With that intro out of the way, Wheels went straight for the lift.

You can watch the lifts in the video below, starting at about the 5:50 mark, with the big lift coming in around 8:30. Throughout the video, Larry Wheels explains that he is focused on becoming a better athlete in competition, and that truly does seem to be the case. It will be exciting to see him take the stage and demonstrate the work he has been putting in.