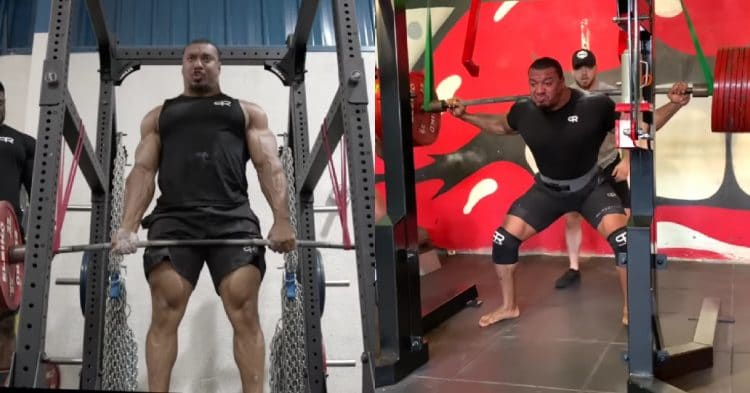 The personal record wrecking machine that is Larry Wheels has been at it again, crushing his own PRs. Ahead of the upcoming XPC Powerlifting Meet, he was in the gym crushing some more of his records, with massive squats and deadlifts.

Wheels has been preparing hard for his chance to win the XPC Powerlifting Meet. Although a few weeks out, he was not looking as good as many would have hoped, he has really started to amp things up as the competition approaches. Despite the fact that he said he wanted to take things slow, he just could not resist breaking his own PR.

That trend continued again recently, with a video to Wheels’ YouTube Channel. Here, Larry can be seen using bands while he hits a massive 937lb squat. As he says in the thumbnail, that is the most weight that he has ever had on his back. Regardless, he crushes it.

Check out the lift, which happens around the 10:00 mark:

The 937lb lift is the final stop on a slew of heavy squats Wheels was doing in the session. The squat could have used a little more depth. On the other hand, considering it was absurdly heavy, and he had done it with bands, it can certainly be forgiven.

This was not the only training Larry Wheels did with bands. He also decided to do an insane 904lb Deadlift using bands. This is a video he published just two days prior:

After he hit the massive weight, Wheels explains that this is not as heavy as he plans to go at the XPC. In fact, he says his third squat attempt will likely only be about 886lb. While this may not entirely make up for the weight distributed by the bands, he will likely be even stronger come competition time.

Larry Wheels has been doing a lot of training with bands lately. It will be exciting to see how he looks when the bands come off, on March 7th.