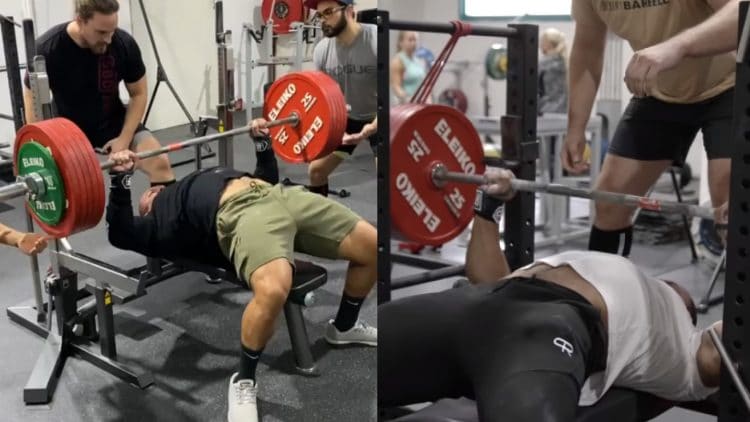 Larry Wheels has been working super hard to prepare for the Arnold Sports Festival in a couple of weeks. Ahead of the contest, he knocked out some serious bench press numbers.

Wheels is known as the personal record destroyer, and he continued this trend over the weekend. He is preparing for the Arnold Sports Festival in two weeks. Although most athletes take this time to hone in their training, and get focused on competition, Larry decided to take a different approach. He had been looking somewhat lackluster recently, but is starting to peak. Therefore, he celebrated this by posting a video to Instagram of him hitting a massive 650lb paused bench press.

While most athletes would be following a strict training plan this close to competition, Wheels wanted to do more. He crushed that PR, as he does, but was not satisfied there. He also took to YouTube the next day, with a video outlining some of his training. In particular, he decided to smash through a 673lb bench press, using reverse bands.

As he alludes to in the video, Larry Wheels is often bad at sticking to a gameplan, and not getting burned out before meets. Despite the fact that he says he is being more disciplined, he just could not seem to help himself from hitting a new PR, and massive bench. Perhaps he was feeling bad about not having great performances in the leadup to this meet. After all, he explained that he started his anabolics later than normal, so he is starting to peak now.

Regardless, Larry Wheels looks absolutely massive and powerful leading up to the Arnold. It will be exciting to see how he looks in Columbus, next month. Hopefully, he can break the cycle of getting burned out before meets.

Gregg Valentino Reveals That He Has Throat Cancer