Larry Wheels pushes himself to the limits by landing an 800lb squat using a safety bar, to score a new personal record 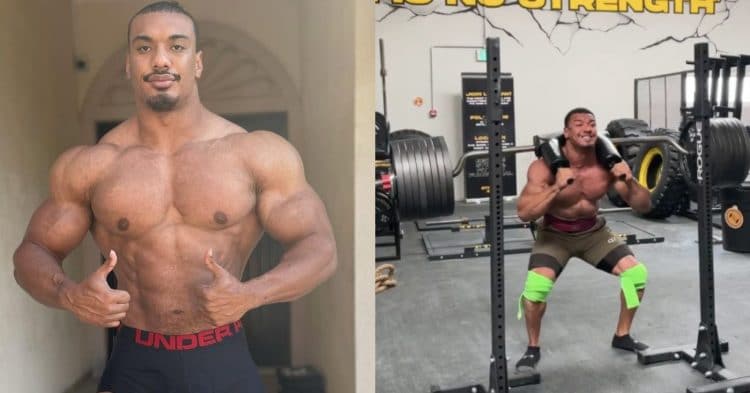 It has been a few weeks since the last time Larry Wheels hit a new personal record, so you knew that we were in for a treat soon. That came in the form a safety bar squat that he hit in the gym, landing a new personal best.

There is nothing that makes Larry Wheels fans happier than seeing him crush new personal records. He earned the moniker of the personal record wrecking machine, and people have come to expect nothing less than insane performances from the powerlifter.

Even in recent months, while Larry is putting more of a focus into arm wrestling over lifting, he has still achieved some new highs. Even if it means shedding some blood while crushing heavy weights, he is never afraid to push himself to the absolute limits of his physical capabilities.

Larry Wheels was back at it again recently, putting together another performance worthy of note. Posting to his YouTube channel, he took fans on a ride through his safety bar squat training session that ended with a new personal record and onlookers’s jaws on the floor.

“The safety squat bar mimics a high bar squat the most, because of how high it sits on your back. So it becomes a very quad dominant movement,” Wheels explained.

“You still can push your hips back and use your low bar squat leverages to move more weight, but because of where the bar is sitting on your back, it’s going to be very high nearly sitting on your neck, it’s very quad dominant. So you’ll always lift less with a safety squat bar.”

After taking a bit of a break Wheels moved on to a massive 696.1lb safety bar squat single, before it was time for the main event. He hyped himself up with a few pats on the head and a shout, Larry steps up to the rack for a 801.6lb (363.6kg) squat.

It was far from easy, but he was able to pull off this massive squat, scoring a new personal record in the progress. It was clear after the fact that he was excited, although he cautioned viewers to not try doing a PR without a spotter, like he did.

“Don’t do that. Don’t do a heavy PR attempt with no spot. Wait. Do not do what I did. Why do I do it? I get tunnel vision, all my gears are on, the bar’s loaded. If I were to sit back down and take everything off, it would have zapped my confidence and momentum,” Wheels said.

“Let’s just call it a lucky day that I went down and came back up.”

After the squat session, Larry Wheels explained the mental effects of seeing Ryan Crowley get brutally injured. It has made him second guess some things, and fear getting injured himself.

Luckily that did not happen this time, but like he says, nobody should follow in his footsteps like that. Pushing yourself in unsafe ways is how people get irreparable injured.