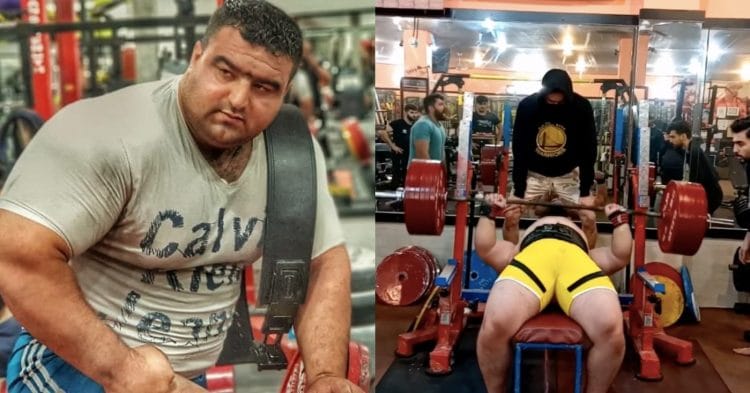 Iranian powerlifter Danial Zamani has burst into the pubic consciousness recently, by establishing his presence as a threat for the bench press world record. He made another step in that journey recently, with an epic performance in the gym.

Having just broke the age of 30, Zamani has been around the sport of powerlifting for a while. However he has stayed relatively low key for most of his career, competing as a +140kg lifter in the World Powerlifting Congress (WPC) and Global Powerlifting Alliance (GPA).

Recent times have seen a boost in visibility for the Iranian though, as it has been made clear that he is someone worth watching. In particular, it is his bench press skills that have garnered notoriety for him, as he appears to be gunning for the world record.

A few weeks back, we broke down how Danial Zamani landed an enormous 325kg (716.5lb) bench press, establishing himself as a threat to the throne. While that was still a long ways away from the 350kg world record, he is working his way there.

Another recent post to Instagram shows that the Iranian is making continued progress in the right direction. Strongman and friend to Danial, Peiman Maheripourhir shared a video of the powerlifting benching a whopping 330kg (727.5lb) with relative ease.

“🔥Bench Press raw 330 kg 🔥
.
Danial Zamani @danialzamani1 controlled 330 kg of RAW
bench press today and is 20 kg away from the world record🔥🔥
(Congratulations to my teammate and best friend)

This is an improvement from the lift that Zamani scored just a few weeks earlier, and shows that he is making consistent progress. He will have to face off against Julius Maddox though, who is the consensus strongest bench presser in the world right now.

While Maddox was not able to do it when planned, he hopes to give another attempt at becoming the first man to bench 800lb. Now it seems like the race is on to see who can have the heaviest bench of all time.

One thing is certain, Zamani is making quick progress with every outing. Here is his 325kg bench from a few weeks earlier for reference, just in case you forgot how he looked during that lift.

It is certainly exciting to add Danial Zamani to the list of athletes who are serious threats to the bench press world record. Time will tel how things shake up between he and Maddox, not to mention the others who are gunning for that throne.