This is not the first and it won't be the last time Larry Wheels bleeds after a big lift! 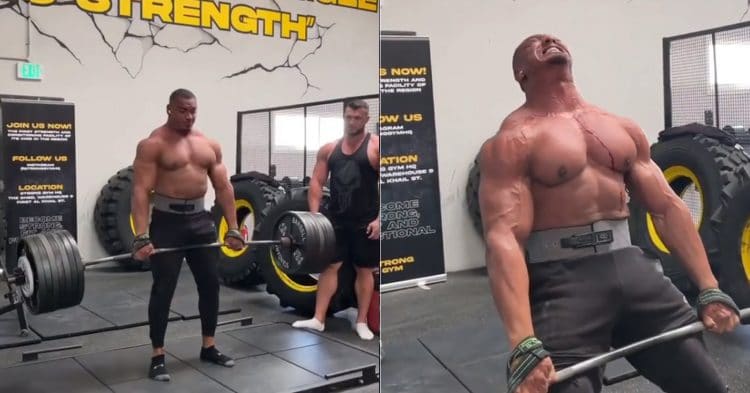 You probably gathered that it’s not the first time powerlifting sensation Larry Wheels has bled from his body while lifting massive amounts of weight. It’s a common thing whether it’s coming from his head or chest.

But hey, what are gonna do, right? He certainly doesn’t seem too bothered by it as long as he’s increasing his deadlift numbers. In fact, he’s said that red looks good on him and that it compliments his complexion. Well, he’d be thinking the same after his recent 700 lb/317 kg deadlift for ten reps personal record.

“I happily bleed for this 700 x 10 dead stop PR,” he wrote on Instagram to accompany the clip of his lifting the massive load for a dime.

It’s a strange thing to see if you’re not familiar with what strength athletes and others who are capable of lifting such huge weights experience. But it happens and it doesn’t necessarily mean anything serious.

In Larry’s case, and from our understanding, his severe acne combined with pressure build-up during heavy lifts causes bleeding.

We also have to admit that one of the comments on his post was pretty funny.

Currently, Wheels is focusing on more Strongman training and he’s been absolutely killing it, making huge improvements. He recently hit an 855 lb/387 kg triple deadlift personal record, although he did get injured.

Then even more recently, he demolished a 167kg/368 lb log press during training.

We don’t know exactly what the future holds for young Larry Wheels but he is well on his way to doing even greater things and we’ll be sure to keep you updated on his progress.