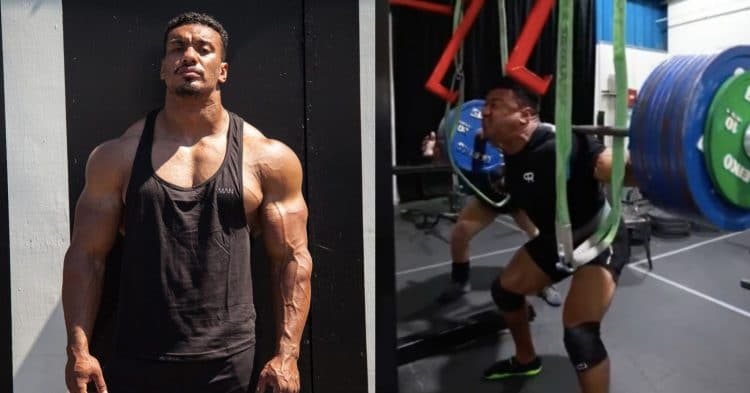 If there is one thing that Larry Wheels is rather familiar with, it is making massive amounts of weight move with ease. He showed this to be the case yet again, when he hit a massive squat in the gym.

Even though Wheels took some time off to focus on arm wrestling, he is now back in the world of powerlifting, and it almost looks as if he never left. He has been putting together some incredible performances in the gym, and is getting back to his full form of being an absolute beast.

He took a big step in the right direction for this too, as seen with a recent video that he uploaded to his Instagram, Here the 26-year old was seen hitting a huge 827lb squat, not one time, but for a staggering three reps.

That was an incredible set, and super heavy weight for Larry to be squatting for one rep, much less for a triple. There is something to be said for the idea that he did not get very deep on the squat, but when it is a rep done in the gym and not competition, that kind of thing is not the biggest deal.

It is unclear what his goals are in terms of competing, outside of his immediate plans to compete at the RPS Long Island Insurrextion on September 11th, but it is clear that Larry Wheels is back to his unbelievable lifting antics. Seeing him arm wrestle against some of the best in the world was fun to see, but powerlifting is unequivocally where his true talents lie.

This was extra impressive, when you consider the fact that this is just 25lb shy of the personal record double he hit about a month ago, when he squatted 852lb for two reps. For him to be that close to this number, and do it for an extra rep, is absolutely mind blowing to see.

With his focus being back on powerlifting, it is safe to assume that we will likely be seeing some more personal records from Larry Wheels in the near future. After all, they do not call him the personal record wrecking machine for no reason.

That being said, the biggest thing that his fans would likely want to see, is him back in competition. He is always a tough test for anyone who faces him on the powerlifting platform.