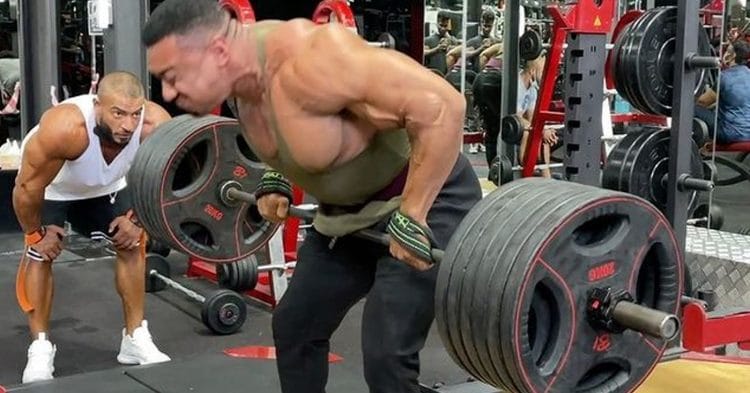 At this point, it goes without saying that Larry Wheels is a complete freak of nature. However if you were somehow still not convinced of that fact, he proved it yet again by scoring a massive new personal record in the gym.

To say that Wheels reached a new personal record is like saying that the sun rose this morning. This is something that we almost always see from the powerlifting phenom, which is why people call him the PR wrecking machine.

No matter the exercise or what body part he is training, it seems like Larry is always pushing himself to the limits. Even just last week we got to see him reaching new highs on the safety bar squat, a feat that even he referred to as reckless.

Now Larry Wheels is back in the gym again, scoring yet another PR. This time it came in the form of a barbell row, which he did during a training session that he shared to his YouTube channel.

After doing increasingly heavy sets of the barbell row, he finally stepped up to row 6 plates, weighing in at 260kg (573.2lb). While he started struggling after the third rep, he pushed out two more, walking away with a completed set of 5 reps and a new personal best.

“It actually didn’t feel too bad, to be honest. It deadlifted very easy, so I knew that I would be able to row. That first rep came up no problem. That was fun,” Wheels said after the set.

After landing the PR, Wheels and Tareq continued the workout with a couple of sets of pulldowns, before moving to close-grip pull-ups. That ended the session for Larry, with Tareq concluding with some hammer strength curls.

Larry Wheels and Omar Tareq ended the video by running through some poses for fun, with Larry even being impressed by the condition of Omar’s legs, given that he is a Men’s Physique competitor.

All in all, this was a solid training session that left both men feeling good. Then again, any workout that winds up with a Larry scoring a new personal record is a good workout.