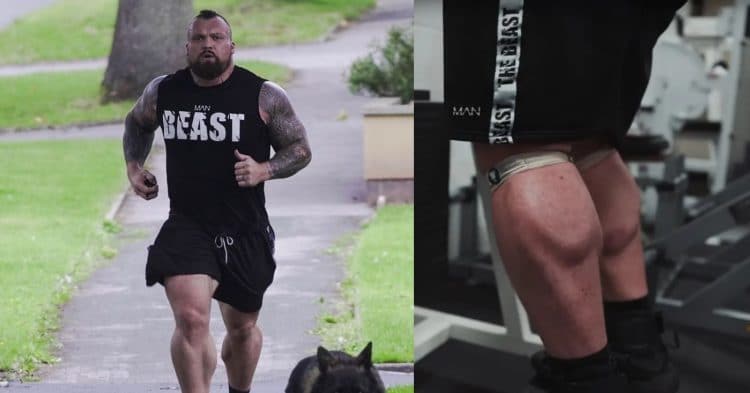 Even as far as a 400lb strongman goes, Eddie Hall seems to have calves that are so huge, they defy logic. Now the Englishman has decided to share his secret, so that you too can develop gigantic calves.

During his time as a top level strongman, Hall was known for a lot of things, not least of which was his deadlift. In fact, he had the world record for the heaviest deadlift of all time, until Hafthor Bjornsson broke that record last year, which eventually has led to the two expecting to fight in a boxing match.

This type of skill tends to come with huge calves, but Eddie explained in a recent Instagram post, that this is not the only reason his calves are so massive. He says that it all comes down to using a patella support band, just under both of his knees.

“Over the years, and you can check this back on all my videos where I was doing leg exercises, (I use) the patella support,” Hall said.

“This is something I’ve used throughout my whole career, to protect my knees. What it does, is it has a little foam insert that you tie under your knee, and it keeps the patella in place.”

Sure, this is great for keeping your knees healthy and strong, but what does it have to do with making the calves bigger? Well Eddie Hall explained that alongside his natural genetics, these bands also act as a way to limit the blood flow to this area of the leg, which then keeps the muscles expanding and healing back bigger and stronger, resulting in his massive calves.

“None of the other strongmen, tend to have big calves. Why is that? One, genetics. Two, it’s the way you train,” Hall said.

Eddie Hall concludes by explaining that keeping the patella support not only protects the knees, but keeps blood in the lower part of the leg, leading to bigger muscle development. While he is right in saying that a big part of his legs being the way they are is genetic, this could certainly help to boost your calves on some level.