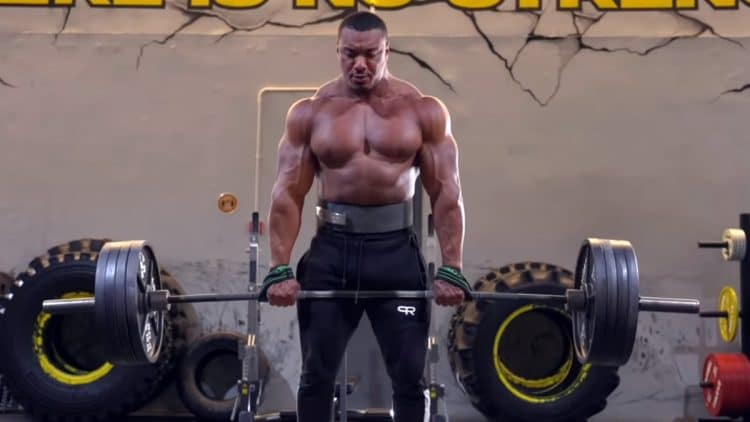 Record-wrecking machine Larry Wheels recently shared his favorite deadlift variations. Wheels is a multi-faceted athlete that has his presence in powerlifting, bodybuilding as well as arm wrestling. He is best known for wrecking powerlifting records in the gym.

Larry Wheels is preparing for the Middle East’s Strongest Man competition and went back to the basics to improve his deadlifts. He shared the video of this training session on his YouTube channel.

In the beginning of the video, Larry Wheels explained that for this session, he will work with 160kg (352lbs) weight. Speed and efficiency were the primary focus of this session and not weight. Wheels admitted that he has not engaged in this kind of training in a long time.

“For the longest time since I have been a hardcore powerlifter, I have not done any deficit pulls or any block pulls, any speed pulls. And these are the building blocks of a huge deadlift,” Larry Wheels said.

Block pulls are helpful in lifting the weights further higher when they are already a couple of inches in the air.

Larry Wheels started the deadlift session with 61.2kg (135lbs) block pulls and worked his way up to 165.6kg (365lbs) in the warm-up sets. Wheels used lifting straps for the movement.

He used explosive motion to lift the weight off the ground and returned it with a gentle motion for every single rep. During the warm-up sets, Larry Wheels said that he used to take a 40kg(88lbs) jump between working sets. However, he felt that it was too quick of a progression and now prefers to increase the weight by approximately 20kg (44lbs) for each working set.

While discussing the correct technique for deadlift, Larry Wheels advised to keep the arms ‘nice and long’ to reduce the range of motion and therefore avoid lifting the bar a few inches higher unnecessarily.

Larry Wheels completed 9 sets of 405lbs deadlifts for eight reps in each set and said that the work ‘is being felt’.

“It was light. But eight reps of any weight is apparently enough to get me huffing and puffing. So the work is being felt,” Larry Wheels said.

Wheels is known for breaking powerlifting records in the gym. However, this session was very different from the ones since it involved high-volume training. While speaking about its benefits, Larry Wheels said:

“So guys, think about that. This is why volume is so effective. You look at it, for me it is a piece of a puzzle. It’s 405lbs for eight reps. But if you look at the entire workout, you’re doing 405lbs for 72 reps. That’s a lot of volume for a 90-minute or two-hour period right?”

“So what do you think will be more effective for building strength? Me hitting 700lbs for three to five reps for one set or hitting 72 reps with 405lbs over nine sets. So this is why working with lighter weight, high volume is so effective. You can not get that kind of volume with 80-90 percent of your max for one set.”

Wheels stated that on day one of his training programme, his coaches tested his strength and Wheels stood at 725lbs for three reps. Based on this, Wheels’ coaches told him:

“We’re gonna base your training wonder max off of that and all your volume off of that percentage.”

“That’s why I did that deadlift triple and that’s why you won’t see that for a little while. Likely won’t be going into that kind of territory for another month or so.”

Larry Wheels next started with deficit pulls. This movement was similar to block pull. However, instead of pulling the weights off of a couple of inches thick blocks, Wheels lifted them directly off the ground and stood on a two-inch thick pad himself.

“So when you’re starting from roughly an inch or inch and a half lower than you would (in a block pull)… So when you pull from the floor, you’ll find it easier. You’ll find more confidence, more explosivity from deficit pulls,” Larry Wheels said.

Larry Wheels started the deficit pulls with 183.7kg (405lbs) and finished five sets of eight reps before moving on to the next movement. He used a lifting belt in addition to lifting straps for this movement.

Larry Wheels next performed the leg press and stated that it is a part of high volume breach strength training. While he admitted it to be the ‘boring stuff’, Wheels acknowledged it as some of the most important aspects of training.

“When you do these high volume training sessions week to week, back to back and you fast forward two months, everything just feels light,” Larry Wheels stated. 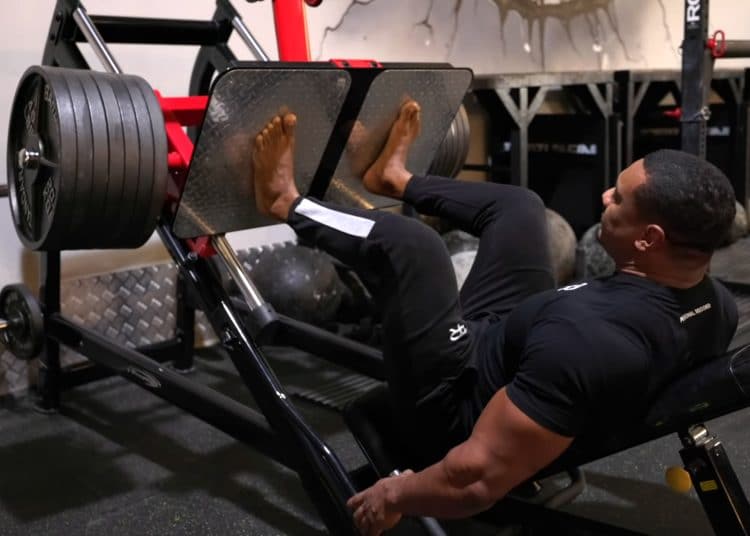 Larry Wheels stated that he has been training in containment strength – the ability to stop someone’s top roll – over the past few months. It is especially required in arm wrestling. Wheels wanted to test if that training has any long lasting benefits on the grip strength.

Since he was sufficiently warmed up with block pulls and deficit pulls, Larry Wheels started with a 2.5 certified captain of crush grippers to test his grip strength. After managing to squeeze the 2.5 and 3 calibre gripper with relative ease, Wheels could not completely crush the 3.5 calibre. However, he came really close to achieving it and stated that it is way closer than any of his previous attempts.

Larry Wheels closed the training session with a few sets of box jumps and had a playful arm wrestling match to end the video.

Larry "Wheels" Williams is known for his almost incomparable power and when he decides to fully isolate and focus on...