Gronk's transformation program will get you shredded to the bone. 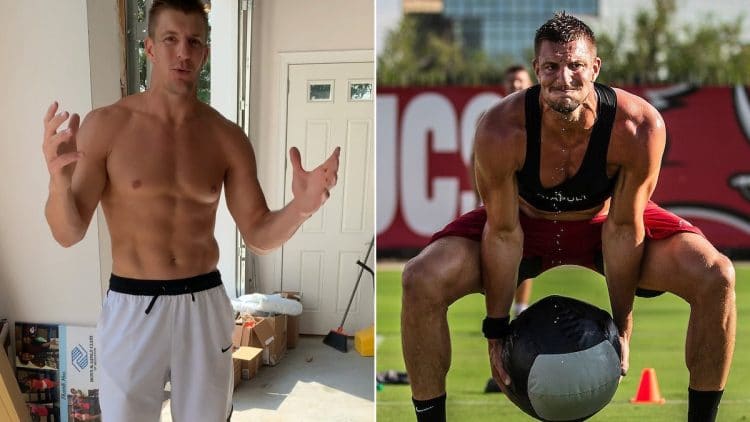 Rob Gronkowski is an NFL tight end who played nine seasons for the New England Patriots and two seasons for the Tampa Bay Buccaneers. He is a four-time Super Bowl champion, a five-time Pro Bowl selection, a four-time First Team All-Pro selection, and was selected in the NFL 2010s All-Decade Team and NFL 100th Anniversary All-Time Team. Hence, it’ll be safe to say that he is one of the most successful tight ends in NFL’s history.

Rob “Gronk” Gronkowski is described as an “NFL supernova,” a “sui generics,” a “gold standard,” a generational marvel,” and an “on-field force of nature.”

Per the NFL pundits, Gronkowski revolutionized the tight end position and became the envisioned archetype for which the position could and should be. ESPN summed it up the best when they said, “it felt like the tight end position was invented in response to his rare gifts, the singular marriage of power and grace he brought to the game.”

Gronk is big, strong, and agile. The six-foot-six NFL player weighs around 265 pounds and has massive hands measuring 10 ¾ inches from thumb to pinkie. He has been compared to NBA’s LeBron James and Shaquille O’Neal as one of the most physically gifted athletes in American sports history.

In 2019, Gronkowski entered ESPN’s “World Fame 100” list of most famous athletes in the world. Although ruthless on the field, Gronk is one of the kindest and most generous sports personalities.

Aside from his own foundation — the Gronk Nation Youth Foundation, Gronkowski regularly helps the Make-A-Wish Foundation and the Patriots Foundation. Additionally, he annually shaves his head for One Mission Buzz Off for kids with cancer.

Gronk was always an active individual. Growing up, he played four sports — basketball, hockey, baseball, and football. He finally settled on football in his senior year after moving to the suburbs of Pittsburgh where he earned several titles for his football skills.

Rob Gronkowski grew up in an athletic household. His father is a former college football guard for Syracuse University from 1977 to 1981 and later founded a high-end fitness equipment business. His great-grandfather, Ignatius Gronkowski, represented the United States in cycling at the 1924 Summer Olympics in Paris, France, and held five world records in the sport. If this was not enough, four of Rob’s five brothers played in the NFL.

Gronkowski had a rough start to his NFL career as he had to miss the first round of the 2010 NFL Draft due to back surgery. However, the Patriots drafted him in the second round with the 42nd pick.

He plays a receiver and a blocker and has several NFL records to his name, including being the first player of his position to lead the league in receiving touchdowns (17 in 2011), most career postseason receiving yards by a tight end (1,163), the most career postseason receiving touchdowns for his position (14 to date), and the most combined receptions (23) and receiving yards (297) by a tight end in Super Bowl history.

Gronk is no stranger to the gym life. He, along with his four brothers, operates Gronk Fitness, a fitness business that sells Gronk-branded gym equipment and has partnerships with other fitness companies including Life Fitness and Xtreme Monkey.

While Rob Gronkowski ate whatever he liked at the beginning of his NFL career, it is no more the case. Gronk adheres to a strict dieting regimen to ensure he is functioning at his best on and off the field. Although not a dedicated vegetarian or vegan, he prefers plant-based foods over animal products.

“I like to go with a mostly plant-based diet. I’d say about 75% and then the other 25%, just keeping it clean but eating whatever. Always making sure I get my fruits and veggies in every day.” – Rob Gronkowski.

1. Go All-in on the Veggies

Rob Gronkowski loves his veggies. He makes sure he is eating veggies with every meal. How big of a veggie fan is Gronk, you ask? He adores avocado ice cream and drinks plant-based protein post-workout.

Gronk avoids acidic foods such as coffee. Additionally, he keeps his distance from processed foods, including anything made from refined flour, sugar, or containing MSG. He believes that cutting out these foods from your diet can help reduce inflammation.

3. Don’t Give Up on Cheat Meals

The NFL player believes that eating cheat meals once a week can do wonders for your transformation. They help you reach your goals as they are an efficient way to cycle carbs and aid in satiating your cravings. Gronk’s favorite cheat meals include buffalo wings, natch, and his mon’s chicken casserole made with bread, cheese, cream of mushroom soup, and boatloads of mayo.

“When my mom’s chicken soufflé comes to town once a month, I’m going all in. That’s my cheat meal, I’m probably going to devour at least half of it when my mom brings it into town.” — Gronkowski on his favorite cheat meal.

After workouts, Gronk gulps down a plant-based protein shake with almond butter, fruit, and chia seeds. Furthermore, he eats veggies, chicken, and sweet potatoes as it provides his muscles with protein, carbs, and anti-oxidants for optimal recovery post workouts.

“After a workout, you definitely need to have a protein shake…I throw some fruit in there…with some peanut butter and banana, and it gives you all the recovery you need from a hard day of lifting and running.” — Gronk on post-workout recovery nutrition.

With his skills in the tight end position and a tank-like physique, Gronk has become one of the most valuable players in the NFL. He uses two different training regimens to remain in shape throughout the year.

Gronkowski uses the five-day training split laid down below in the off-season to build strength and endurance for the upcoming season:

Gronk starts his chest and arms workout with the barbell bench press, where he goes as heavy as he can while maintaining the correct lifting form.

Rob Gronkowski ends his second workout of the week with four different agility drills. These drills mimic the activities of his sport and help him build functionality, strength, and explosiveness.

Gronk dedicates a training session to his midriff as it aids in building core strength and stabilizers, which can result in a better performance on the field.

“I truly believe that the best workouts start with stability, which focuses on the core.’” — Gronk on core training

For his second chest and arms training session of the week, Rob Gronkowski relies on dumbbells and bodyweight exercises. Furthermore, he uses unilateral training to ensure strength and muscle balance on both sides.

The NFL player wraps up his training week with a lower-body training session. While performing the exercises, make sure you’re not going through the motions just for the sake of it. Pause and contract the target muscles with every rep to get the best bang for your buck.

Rob Gronkowski uses the weekend for recovery. However, don’t use this as an excuse to turn into a couch potato. You should head out for a run or jump onto a treadmill for a 15-30 minute LISS (low-intensity steady-state cardio).

Gronk’s off-season weekend routine involves cross-training. He plays basketball and volleyball or rides his bike on his rest days as he believes these activities make him stronger, more agile, explosive, dynamic, and functional.

The circuit training workout consists of eight stations. Perform one exercise from each station for 30 seconds and rest for 30 seconds before moving on to the next station. Repeat this cycle for three rounds with a 90-second rest in between rounds.

After you complete three rounds, perform any two exercises from the workout while maintaining high intensity for 60 seconds each.

The NFL superstar relies on the following supplements to improve his functionality and overall health:

Rob Gronkowski is a force to be reckoned with in the NFL world. While genetics could have a role to play in his six-foot-six frame, his strength and athletism are results of his hard work, dedication, and discipline in training.

If you’re an athlete and are on the market for a workout program that can help you improve your game, you cannot go wrong with Gronk’s workout and diet program. It has everything you need to function at optimal levels. Best of luck!

Fasting has been an essential part of human life for thousands of years. In modern times of no scarcity, overeating...