Joe Mackey experienced a lot of turbulence in the 900 lbs pull, but his grit and determination prevailed. 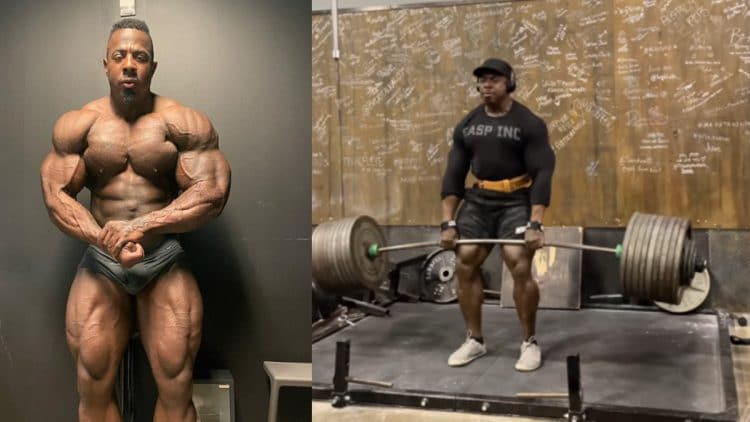 IFBB Pro Bodybuilder Joe Mackey has been chasing an enormous deadlift milestone for a long time now, and he shared each step of his journey with the fans. It’s not every day that we get to see bodybuilders achieve such an impressive feat of strength, but Mackey makes his lifts look as easy as powerlifters and strongmen do.  Earlier this year, Joe made himself two goals. One was to pull 900 lbs (408 kg), and the other one was to win a Pro Bodybuilding show. And on April 16th, Joe Mackey shared a video of him deadlifting a massive 900 lbs (408 kg) on his Instagram. To make it even more special, Joe dedicated the lift to the late Cedric McMillan, a bodybuilding legend who passed away recently.

“This one was for you too, Cedric McMillan. Rest in paradise, big bro.”

Joe Mackey only used wrist wraps, and a lifting belt which was custom-made for him. The belt was made for the 900 lbs deadlift and had a motivational quote engraved on it. So Joe’s lift is considered raw. His style of deadlifting is with a conventional stance and a hook grip. It definitely did not look easy as Joe was shaking during mid half of the lift but managed to plow through it. It seems though the bodybuilder’s tank is full of strength that has a never-ending supply of power.

“If you look midway through the lift, you’ll see I shake my head no because doubt kicked in and said drop it, but that wasn’t going to happen without a fight.”

In a post previous to this one, Joe Mackey described the attempt as “My final lift – the goal from the beginning,“. However, On Sunday, April 17th, Mackey made his intentions clear to chase 1,000 lb deadlift PR but the timeline for that is not known yet. Joe wants to beat some known names in the powerlifting community in the process by pulling 1000 lb.

At 37-years-old, Joe Mackey is considered one of the strongest bodybuilders in the IFBB Pro League, alongside Kyle Kirvay, who also pulled 805 lbs at the 2022 USPA Battle at Atilis. Not only that, many well-known pro bodybuilders in the past have achieved the strength feat by pulling monstrous weights. Ronnie Coleman knows a thing or two about lifting heavy weight, while Stan Efferding, Johnnie Jackson, Franco Columbu, and a few others join him to form the All-Time Strongest Bodybuilders list. Joe has now definitely earned the right to be compared with them, having pulled 900 lbs. Joe Mackey won his IFBB pro card by placing second in the super-heavyweight division at the 2016 NPC Nationals. He has not yet won a pro-competition, but that is his next goal.

Joe Mackey has accomplished the first of two goals he set for this year by deadlifting 900 lbs. He will now continue his bodybuilding preparation for a competition later this year, and will attempt to win his first pro bodybuilding show ever.