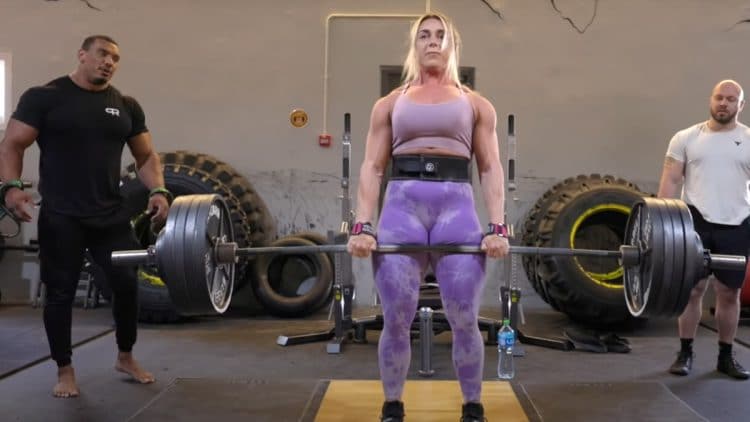 Powerlifter, bodybuilder, and arm wrestler Larry Wheels recently joined hands with bodybuilder Kiera Aston for a crushing deadlift session. Wheels is known for his record-breaking lifts and superhuman strength in the gym. He is currently preparing for the Middle-East’s Strongest Man competition that is due to take place in August 2022. Kiera Aston became the youngest IFBB Pro in Europe and she is known for her impressive deadlifts. The duo went through the deadlift session at the Strong Gym HQ in Dubai, UAE. The video of this session was uploaded on Larry Wheels’ YouTube channel on April 19th, 2022.

Larry Wheels is in the early stages of his preparation for Middle-East’s Strongest Man and the focus of his lifts currently lies on speed and efficiency rather than lifting heavy weights. Therefore this training session included high volume with moderate weights.

Wheels further stated that they will go through the workout with high intensity and short rest periods and try to finish it within approximately 90 minutes time.

The duo started the training session with warm-up sets to get the blood flowing into muscles. Larry Wheels deadlifted 61.2kg (135lbs) for six reps in the first warm-up set using lifting straps. Similar to his previous deadlift session, Wheels employed explosive movement to lift the bar off the ground and returned it with slow and controlled movement.

Wheels and Aston worked their way up to 183.7kg and 211.4kg in the subsequent sets. Larry Wheels added that unlike before, he has started taking 20kg (44lbs) weight jump during warm-up sets to make slow and steady progression. He is working towards building the speed and efficiency in his deadlifts. Therefore block pulls and deficit pulls are an important constituent of his deadlift sessions. His last three warm-up sets of 142.9kg, 165.6kg and 183.7kg were block pulls lifted off a couple of inches thick pad.

After getting sufficiently warmed up, Larry Wheels next performed deadlift working sets. The targeted nine sets were divided equally between block pulls, deficit pulls and regular deadlifts. Block pulls are a deadlift variation where the individual lifts the weights off a couple of inches or thicker pads. This variation helps with building the strength to lift the weights further higher when they are already a few inches in the air. On the other hand, deficit pulls are a variation where the person stands on a couple of inches thick pad himself and lifts the weight off the floor. This variation furthers the ability to lift the weight off the ground efficiently.

Larry Wheels started the working sets with nine reps of block pulls in the first set. He used lifting straps and lifting belt to lift the 206.4kg (455lbs) weight. He then followed it up with a two more sets of eight reps. Wheels has lifted heavier weights before. However, he admitted that the high volume made it difficult for him to lift moderate weights too.

“It’s not easier than when I’ve done 320kg for ten reps. It feels just as hard which is funny. Not that I am weaker. But the cardio… So many reps!” Larry Wheels said.

Wheels next performed the working sets of 206.4kg (455lbs) deficit pulls. During his first set of eight reps, Larry Wheels’ coach noticed that the last two reps in the set required his pupil to grind out the lift unlike the first six that were smooth. He advised:

“It starts to slow down around the sixth rep and then the last two reps become a grind. The sets after, we’re going to cut it back to six reps rather than eight. Because what we’re going to be doing is not grinding out the reps. You’re going to keep the same speed throughout the sets, the reps and the variations.”

Larry Wheels completed the remaining two sets of deficit pulls for eight reps and moved on to the regular deadlifts.

After completing the first set of deadlifts, Larry Wheels stated that he has not trained for volume for years. Wheels wrapped up the deadlift session with two more sets of 206.4kg (455lbs) deadlift for eight reps.

Kiera Aston had initially planned to attempt a 224kg (493.8lbs) deadlift PR for ten reps. However; she went for the 220kg (485lbs) instead. Aston had completed all her warm-up sets without any equipment and used lifting straps and lifting belt for the working set. Just like many other powerlifters, Kiera Aston used smelling salt before attempting the feat to wake herself up. She completed eight reps of 220kg and chose to stop at that instead of attempting to lift further.

“Ten (reps) is for the next video,” Kiera Aston joked.

Larry Wheels wrapped up the deadlift session with a few sets of seated cable rows with lat pull bar and band pull aparts to build the posterior muscles strength.

Courtesy of Larry Wheels’ YouTube channel, you can watch the full video of this training session here: