Kyle Kirvay is no stranger to lifting heavy weights, as in his recent session he showed off impressive strength, raw power and stamina. 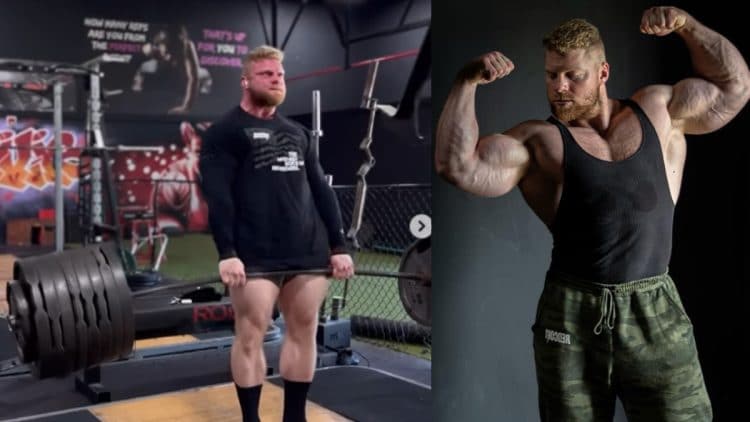 The IFBB Pro bodybuilder and powerlifting phenom, Kyle Kirvay, is regularly showing off his incredible raw power through exhausting training sessions, and it seems like his tank is filled with unlimited energy. On April 21st, Kyle once again displayed his unbelievable strength by sharing a humongous 815 lbs (370 kg) deadlift single on his Instagram.

Kyle Kirvay only used lifting straps to aid him in the lift, while his style of deadlifting was with a conventional stance. Kyle also stated that this is the first time deadlifting over 800 lbs in the last few months, and that he needs a longer bar, which implies that he can pull more, but can’t fit the weights currently.

Kyle Kirvay’s original sport is bodybuilding, but it seems that powerlifting is intriguing for him. He already took part at the 2022 USPA Battle Of Atilis powerlifting contest, and claimed some massive lifts and records.

Kyle’s recent 815 lbs (370 kg) deadlift from training is already 11 lbs heavier than what he lifted in his first powerlifting competition. This points towards an incredible second performance, as Kyle will only continue to get better.

Kyle Kirvay earned his IFBB Pro Card at the 2018 2018 NPC Universe Championships in the Men’s Heavyweight and Classic Physique. He had one Pro Bodybuilding competition after that, which was the 2020 IFBB Chicago Pro, where he placed 16th in the Men’s Open.

Throughout the years, only a selected few of IFBB Pros were acknowledged for their absolutely incredible strength. And although there are not any official deadlift rankings for Pro Bodybuilders, not many of them were able to pull over 800 lbs (363 kg). The most notable one is Joe Mackey, who unofficially became the first IFBB Pro to deadlift 900 lbs (408.2 kg) just a few days ago. However, Kyle Kirvay has the ability to become the second bodybuilder to do so.

With some more work and getting used to the weight, there is no doubt that Kyle Kirvay can top the list of the Strongest IFBB Pro Deadlifters. Kyle “The Tiger” Kirvay’s recent feat of strength was stellar and with due diligence in training he will do wonders in a powerlifting competition later this year. Kyle will also take part in a bodybuilding show either this or the next competitive season.