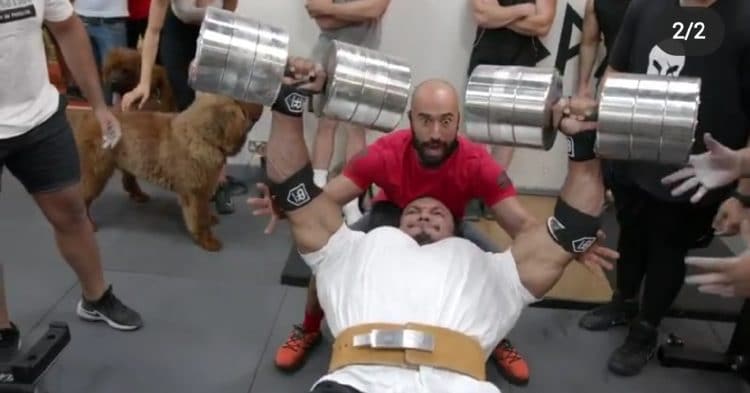 Over the years, Larry Wheels has been synonymous with pushing the limits of his physical capabilities. He took things to a whole new level recently, when he hit an unofficial world record in the gym.

As the PR wrecking machine, Wheels has made his career on the back of doing incredible things with weights. He has captured many records in his day, but the one that he was most recognized for was his incline dumbbell press record. That is, until Eddie Hall broke that record earlier this year, but using 242lb dumbbells. It was a wild affair that seemed impossible to break, at least for a very long time.

However Larry Wheels was not going to just let things lie, after Eddie Hall snatched his record. In a post to his Instagram, the powerlifter used 250lb dumbbells in each hand to do a 500lb incline dumbbell press double. That in itself was undeniably incredible, and more than enough to drop the jaws of people watching around him. Yet he did not stop there, as the following video saw him set an unofficial world record with an enormous 550lb incline dumbbell press.

That is an absolutely wild performance, as Wheels demolished that double with relative ease. If you want to nit-pick, you can say that his spotter touched his elbow on the single, which means that it would not have counted in an official setting. Nevertheless this was a ridiculous amount of weight, and it is well past the numbers that Eddie Hall set in January, so there is no point in splitting hairs over the small amount of contact from a spotter, done in an unofficial setting.

This was something that Wheels had been working his way up to for a while. He got his hands on these massive dumbbells, and did not look back. Just a few weeks earlier, he was seen in the gym going for three reps of a 484lb incline dumbbell press, alongside bodybuilding prospect Blessing Awodibu.

This is an unbelievably ridiculous achievement from Larry Wheels, and it shows how much he has been working over the last several months. It seemed that he was a little bothered by the fact that Eddie Hall snuck up and stole his record from him. Although he will still have to do this in an official setting, he is clearly capable of putting up some insane numbers.

What is the Best Chin-up and Pull-up Alternative?