That is some unreal weight to be snatching by the Georgian superheavyweight! 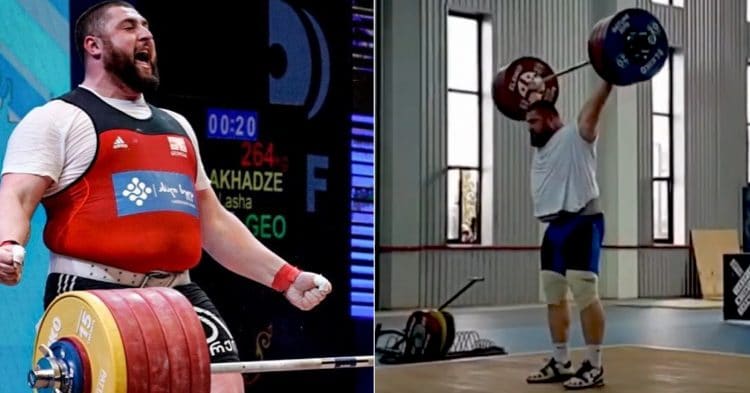 Current snatch record holder Lasha Talakhadze from Georgia (the country) went full beast mode at a national Georgian weightlifting competition over the weekend. He pulled off (pun intended) a ridiculous 222kg/489lb snatch, which is the heaviest to ever be recorded, and this surpassed his previous best (an all-time record) by just 2 kg (220kg).

The 26-year-old superheavyweight took four attempts to achieve this feat after having completed 205, 212, and 218kg. But it was only a matter of time before he bested his heaviest performance, and now can celebrate yet another amazing accomplishment.

Talakhadze is an Olympic champion (2016), four-time World champion, and four-time European champion. But his accomplishments don’t just end there, he won IWF Male Lifter of The Year three times and also happens to hold the world record in the clean and jerk (264 kg/582 lbs).

While having first competed in the +105kg category until 2018, Talakhadze achieved a world record in the snatch at the 2017 European Weightlifting Championships with 217 kg, the highest snatch ever recorded at the time.

He surpassed this at the 2017 World Weightlifting Championships, breaking his own snatch record with 220 kg/ 485 lbs, while winning all three gold medals, and setting two world records. Although, the 220kg snatch record only held until the IWF restructured the weight classes in 2018, of which Talakhadze competed in the +109 kg category from that point on.

There’s little left to be desired regarding Lasha Talakhadze’s achievements, although it wouldn’t be surprising if he came back and topped his new all-time record snatch performance. This was truly an impressive feat from the greatest of all time.