Including battle ropes in your training can take your cardiovascular fitness and power development to the next level. It's a tough conditioning activity that has real-life transfer but isn't for the faint of heart. 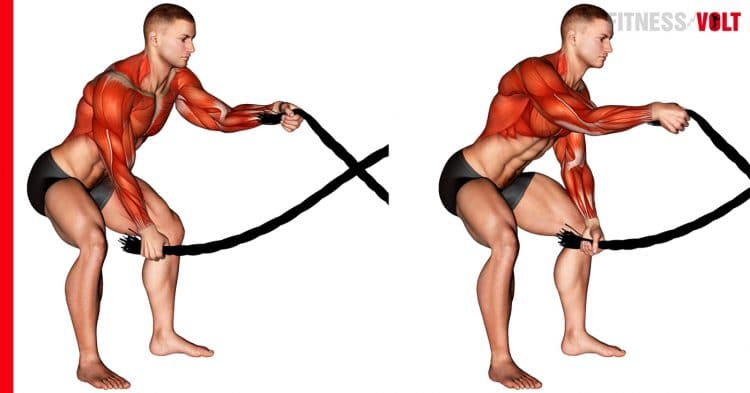 Battle ropes may seem intimidating at first and make no mistake, it’s not an easy activity to partake in (at least not when done properly with decent intensity). However, that doesn’t mean you should ignore it, especially if you’re curious about the potential benefits of this exercise.

And as with any form of training, you don’t have to go all out at first. After all, everyone has to start somewhere, right? Battle ropes are a very good conditioning activity that improves upper body power and works the shoulders, arms, and more. We’ll show you how it’s done plus offer you some tips, provide a few variations, and offer some advice on how to incorporate it into your training.

Here’s a guide to battle ropes…

How To Do Battle Ropes

We’ve provided step-by-step instructions for battle ropes to help you maximize the effectiveness of this exercise. There are many different ways to do battle ropes, a few of which we’ve also provide details for. But the following instruction is for the basic, alternating variation.

While the delts will take a beating during battle ropes, there are various muscles involved in this exercise. Here’s a brief description of each one.

The lateral deltoid is also one of three heads of the shoulder. It functions to abduct (move laterally away from the midline of the body), the arm from 15-100 degrees while the other heads stabilize the arm. Other functions are shoulder flexion and shoulder transverse abduction (shoulder externally rotated).

The deltoid anterior is the front deltoid and also one of three heads that make up the shoulder. Its primary function is to raise the arm overhead. This head plays a big role in vertical pressing while also acting as a strong synergist during horizontal pressing.

The brachialis provides pure flexion of the forearm at the elbow joint. It’s located deep to the biceps on the outer portion and creates width to the upper arm.

The brachioradialis is a forearm muscle that functions to flex the elbow. It also supinates and pronates the forearm.

The biceps is a two-headed muscle located on the anterior of the upper arm. It supinates the forearms and flexes the elbow to a lesser degree.

The triceps is a three-headed muscle located opposite the biceps. Its primary function is extension of the arm.

The teres minor also contributes to the rotator cuff and therefore helps to stabilize the glenohumeral joint. Its primary function is lateral, or external, rotation of the arm at the shoulder.

The trapezius muscles of the upper back consist of descending, transverse, and ascending muscle fibers each that contribute to separate functions. The traps are a postural muscle that functions to stabilize and move the scapula.

The lower fibers function to upwardly rotate the scapula.

The middle fibers of the trapezius function to adduct (retract) the scapula.

The rectus abdominis forms the “six-pack” on the anterior of the trunk. It’s an important postural muscle that flexes the lumbar spine, which is seen during abdominal crunches.

The alternating battle ropes are amazingly effective. However, you’d be leaving gains on the table by not utilizing some of the other variations that vary in difficulty. Now, we couldn’t possibly provide all of the variations as there are so many but here are some we think you’ll like.

This is similar to the basic alternating variation, however, this time you’re moving both arms up and down at the same time and not in an alternating fashion. You can also use a little momentum from the legs if you want to.

If you’ve ever wanted a reason to do the Hulk smash without looking silly, this is your opportunity. Battle rope squat jump slams are excellent for improving both upper and lower body power and explosiveness. You can use heavier ropes for these to replicate medicine ball slams.

For this one, you get into a high plank position, although, you can do this in the conventional plank position with your forearm supporting your body weight. This variation really engages the core and helps to improve full-body stabilization.

Here’s an example of this exercise.

How To Incorporate Battle Ropes Into Your Training Routine

Because battle ropes are typically done in rapid fashion, it’s best to do them until you’re exhausted or for a specific amount of time.

For example, you can do 20 seconds on, followed by enough rest to where you can catch your breath before going another round. You can combine the different variations for one workout to focus on different aspects of development. Or you can utilize one variation and do 2-4 rounds to failure. The options are endless.

Introduce athletic movements such as moving side to side quickly, jumping jacks, alternating lunge jumps, etc. Include battle ropes during HIIT (high-intensity interval training) training to really scorch your fat cells, and take your conditioning to the next level. Battle ropes also make for an excellent finisher after a workout session.

There’s no one way to do it so get creative and start off slow and light if you’re a beginner. Perfect the basics before moving on for safety and to maximize the effectiveness of this awesome activity.

Battle ropes is a great exercise that anyone can do to improve their fitness levels. And the great thing is, there are so many different variations that you’ll never become bored. Not to mention, it’s a suitable replacement on those days when you want something a little more exciting and intense compared to typical steady-state cardio sessions.

We hope this guide was helpful… now it’s time to get to work!

Are you an overhand or underhand grip type of exerciser? Some people choose to have the best of both worlds...