Former Superbowl champion James Harrison thinks he may have what it takes to challenge the strict curl world record. 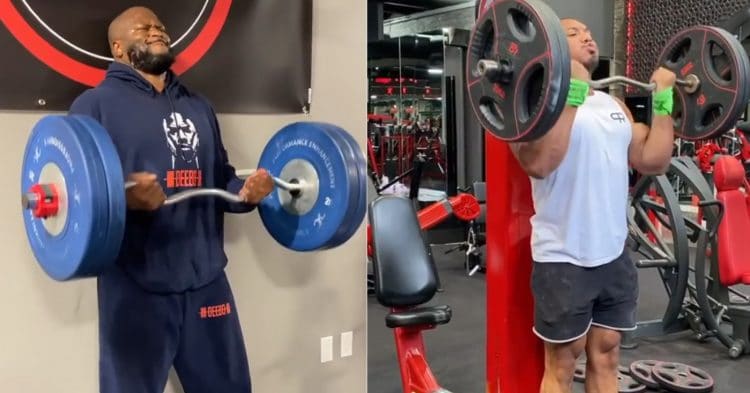 So Larry Wheels recently shared a video where he strict curled 90kg/198lbs which was about 50lbs short of the all-time strict curl record of 113kg/249lbs set by arm wrestler Denis Cyplenkov in 2016. What’s super impressive about this is that he never attempted it before and after a week or so of training, he increased his strict curl to 95kg/209lbs to close the gap even more. On top of that, he tore his bicep not too long ago and… well, yeah, he’s Larry Wheels so there’s no real surprise there.

But this all started, of course, when fitness YouTuber Nick Miller (Nick’s Strength and Power) made a video about the strict curl and Cyplenkov. Miller explained that he set several strict curl records himself with a best of 165lbs at the same bodyweight which is very impressive.

So Larry Wheels wanted to see how much he could strict curl of which he also created a challenge where for others to post their best strict curl.

He wrote the following on the first post with the basic standards for the strict curl that others should follow if the lift is to count… “90kg/198lb strict curl challenge! Tag me in your best strict curl and get reposted! Head, back and butt must be touching wall during the movement!”

That was insane for his first time ever doing this lift. Not to mention, it appeared that he definitely could have added a few more pounds on top of that.

But then just yesterday he posted another clip where he surpassed his previous attempt which was visibly more challenging as expected. On the other hand, it’s clear he has lots of potential in this lift.

So Larry definitely had his fair share of responses to the challenge but one that stood out, in particular, was former NFL linebacker, James Harrison. If you’re familiar with him then you’d know he’s a beast and you don’t get the nickname “Silverback” for nothing.

Harrison posted his own video of a strict curl with two 45lb plates on each side (180 lbs) plus whatever the bar weighed which varies with curl bars. So, it could have been anywhere from 190lbs to likely 205lbs of which the latter seems more likely. This is just 4 pounds shy of what Wheels’ did which is very impressive.

Check out the video below with the caption… “I interrupt leg day in honor of @larrywheels strict curl Challenge. I feel like I got a shot at the record“… it appears he’s coming for the record too!

Although Denis Cyplenkov’s strict curl record likely isn’t in any danger at the moment, it may be some time in the near future. Although, when the weights start to get heavier after a certain point with certain lifts, we start to see where gaps are as narrow between two individuals as previously thought.

But, Larry Wheels’ strict curl is now just roughly 40 lbs from the all-time record after one week of training. We expect him to only go up from here and following his progress will be very interesting. But with James Harrison right on his heels, we might have to keep up with both of them.

Not to mention, Nick Miller also mentioned that he’s going to be training the strict curl in an effort to get into the 180s at a 185 lb bodyweight. He obviously won’t get near the record but for that bodyweight, he’d be in an elite class of his own.

We expect this to get a lot more attention now that the strict curl has become even more popular especially with Larry Wheels now training to break the world record. We don’t know when or if it’ll happen but as always, we’ll be sure to keep you updated along the way.

The 12 Best Glute Exercises For Mass