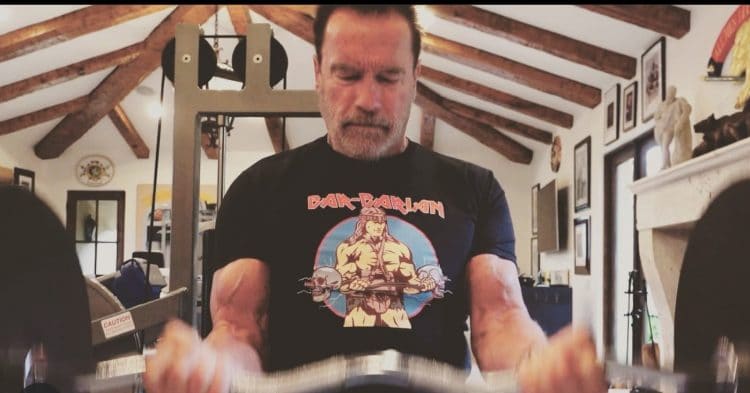 Recent controversies aside, Arnold Schwarzenegger is still a legendary figure in the bodybuilding world, who can offer ultra helpful advice. He did this again recently, sharing his tips to get started with weightlifting.

As someone with seven Olympia titles on his resume, with a physique huge enough look like a futuristic robot killing machine, it is safe to say that Arnold knows his way around the weight room. In fact, he became known for using heavy weight training during his time on top, which was a technique that has largely changed over time.

However, Schwarzenegger is still a man who can provide solid advice to those looking to get their start in the world of weightlifting. That is precisely what he did in the same edition of his newsletter where he addressed the recent backlash he has been facing, answering a question from a fan who wanted to know the best way for a girl to get started lifting weights.

“I would have the same advice for you as I do for any boy!” Arnold Schwarzenegger wrote.

“But it really depends on what type of weightlifting you want to do. Do you want to lift to just feel better and look better, or do you want to get into powerlifting, or are you inspired by the Olympics and want to start Olympic lifting? They’re all good options.”

Arnold proceeded to tell this fan not to let people bring her down because of her gender, and that fitness is for everyone. He then advised that beginners work on perfecting the basic lifts and not worry about anything fancier, until they have mastered simple techniques.

“First of all, don’t get discouraged because of your gender because, remember, fitness is for everyone. If anyone gives you crap about it, let your lifting do the talking. If you want to just start lifting to feel better, take it one step at a time, start with lower weights and really focus on your technique. Slow and controlled.

“Don’t worry about the fancy exercises you see on Instagram either, stick with the basic lifts like the squat, deadlift and press until you master them,” Arnold continued. “After a while you’ll see yourself getting better and stronger, and before you know it you’ll be deadlifting more than all the guys in the gym.”

He then recommended that anybody who was inspired by the Tokyo Games and the weightlifting seen there, read into the career of legendary gymnastics athlete turned weightlifter Katherine Nye. He then concluded with one final piece of advice, which essentially sums up everything there is to know about starting any kind of new activity, weightlifting included.

“Stay consistent and stay confident and no one can beat you! One day I’ll be talking about you in my newsletter to inspire another young woman to start her fitness crusade!” Arnold wrote.

Regardless of how some people are feeling about Arnold Schwarzenegger at this current moment in time, it is impossible to deny how helpful this advice will likely be for the young lady who asked him this question. The bodybuilding and Hollywood icon is still one of the best minds in the world, when it comes to fitness.