Lewis Byng seems to be a man of many talents, but also a potential Deadlift World Record holder. 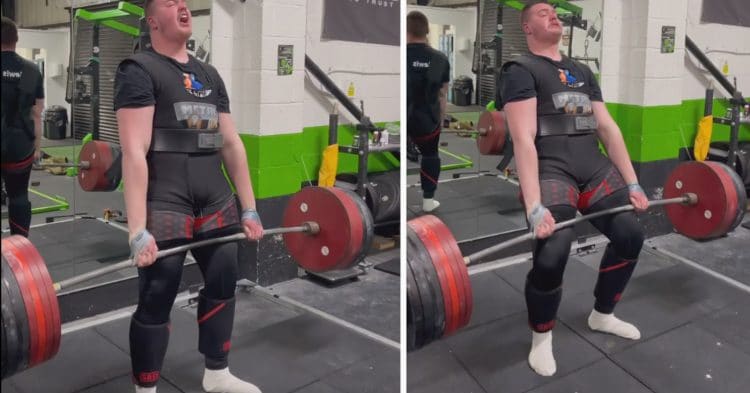 Strongman Lewis Byng has already caught some attention from the public, after deadlifting 371 kg (818 lbs) at the age of 19. With this lift, Lewis claimed the British U23 Deadlift Record, but judging by his recent Instagram posts, his deadlift abilities are improving very quickly.

Lewis posted a video showcasing his massive 400 kg (882 lbs) deadlift, done at only 20-years-old. He used a lifting belt, a deadlift suit, and a pair of lifting straps, while his deadlifting stance was conventional. The first half of Lewis’s lift went pretty good, but once he lifted the bar over the knees it required a lot more effort. Furthermore, Lewis had to hitch backwards a lot, which would be illegal in powerlifting, but is allowed in the sport of Strongman.

Despite being diagnosed with High Functioning Autism and Tourette’s syndrome, Lewis found a few areas in which he excelled. At the age of 9 -years old, Lewis realized that he possessed some talent for athletics, and started competing in the 75 meters and long jump before progressing onto 100 meters a year later. After doing those for a bit, Lewis switched on to shot put, where he now competes, and has represented England and Great Britain in the event.

Lewis Byng is on the road to becoming a great strongman athlete, and he could look up to the current World’s Strongest Man, Tom Stoltman, and how he used the power of autism to help him win. It seems like Lewis realized what his talents are, and that he is willing to pursue them until the end. Who knows, maybe in a few years he could be one of the competitors for the deadlift world record.