There are a total of five Stoltman brothers, and the youngest of them has decided to follow Luke and Tom's footsteps. 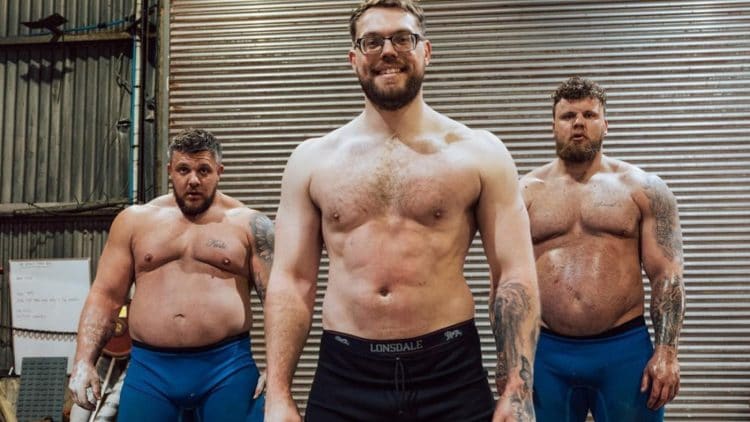 The brothers have now started a YouTube series on their channel called “BECOMING A STRONGMAN”, where Tom and Luke will try to coach and help Harry. Two things are certain, Harry has the genetics for the sport, and his coaches couldn’t be any better.

Just before their workout starts, Luke Stoltman expressed a bold statement, which under the circumstances is very possible.

The first part of the workout is the log lift, for which Luke is most famous for, as overhead pressing  is his greatest strength. Before starting with the log, the trio warmed up with some resistance bands. Luke explains that the aim of the exercise is to help Harry get into the right position while overhead pressing, and to teach him how to use leg drive.

Harry starts with a 30 kg log, just to get a feel for it. That felt really easy for him, so they upped it to 50 kg, while Tom and Luke moved up to 90 kg. Harry was doing regular pressing, while Tom and Luke made some variations. They lifted the log off the floor a couple of times, and dropped it back down. After doing a few reps of that, they started doing normal log presses.

Furthermore, Harry increased the weight to 70 kg , and squeezed out four reps, while Tom and Luke increased their log to 110 kg. Harry expressed that he wanted to do 90 kg, but before that he did 3 reps with 80 kg.

Luke talked about their training plan, and explained that he wants to slowly build up to the 230 kg log lift for the competition, which would be 1 kg heavier than the current World Record. He and Tom continued doing sets and upping the weight by 10 kg, finishing with a 160 kg log lift. Harry did multiple sets of 3 reps with 90 kg, but did lose balance in a few of those reps. Luke explained why, and gave Harry some tips.

“You want your chest to be facing up to the ceiling,” said Luke.

Luke explained that if the chest dips forward, the log will not be in line with the body, and it will ruin the balance. Harry then talks about his goal in the log lift, and points out that the wooden log (140 kg) is something he aims for.

Harry did not participate in this exercise, while his brothers started with 80 kg. They moved on to the 100 kg dumbbell very quickly. Tom did singles, while Luke started with singles, but managed to squeeze out some triples as he felt very comfortable.

The 125kg (275lbs) Monster Dumbbell for reps will be one of the events in the 2022 Arnold Strongman Classic scheduled for March 4-5, 2022 in Columbus, OH. Both Tom and Luke Stoltman will compete at the said competition.

At the end of the heavy dumbbell press, Tom started struggling with the mental side of the workout. He explained that he wasn’t pleased with how he felt in training, and that he expected to lift more. This carried on to the next exercise, where they decided that it would be better for him to take it easier and rest a bit.

The second workout of the day started with some bag tossing. Harry’s program did not involve the bag toss, but since it’s one of the primary strongman events, he decided to join Luke and try to learn the technique.

The bags weighed 20 kg/ 22 kg/ 24 kg. Furthermore, Harry and Luke did not set up a bar to measure the height, and instead focused on the technique of the tosses and finding the correct release point.

On the second set of the tosses, Luke noticed movement in Harry’s wrists while doing the exercise. He explained to him that the hands are supposed to be locked and straight all the way. Luke then explained what happens when the wrists are not stiff.

“When it goes through like that, it will change the angle, so the trajectory will be off,” said Luke.

At that point, Tom came back and talked about the mental aspect of working out.

“My head just goes too much. I just overthink things. I don’t like making excuses and stuff, but like I just get annoyed with myself… When I see something written down on paper, if I don’t fulfill that then I get really annoyed with myself.” said Tom.

This really showed the winning mentality of Tom Stoltman, and proved that even The Strongest Man On Earth has some bad days.

Tom and Luke started doing Shield carries with 160 kg, while Harry did farmer’s carries with a frame that had a weight plate loaded at opposing corners to train stability during the walk. After some time, Tom and Luke made the carry shorter to work on their speed and turnarounds, while their younger brother progressively upped the weight on farmers carries. Tom and Luke then transferred to the farmers carry frame heavy pick-ups.

Harry first started with crossing heavy sandbags over the bar, to get him accustomed to the movement. The sandbag weighed 100 kg. Harry’s brothers explained to him that he needs to pick up the bag, then “sit down” to get a better grip positioning for lifting.

Tom and Luke moved on to an awkward looking stone, the aim was to lift the stone from the floor to the shoulder, keeping in mind it looked very hard to grab on.

Luke ultimately had Harry put protective tape on his forearms, so he could test his hand with an Atlas Stone. With a 120-kilogram (264.6-pound) stone, the senior Stoltman brother and the junior Stoltman sibling competed in a famous stone-off style session. Harry managed to squeeze out 5 repetitions, which left Luke looking very proud and impressed by his younger brother. They finished the workout with some more reps of the atlas stones.

Luke and Tom have multiple major competitions this year, and the first of those will be the 2022 Britain’s Strongest Man (BSM) contest on February 26, 2022, at the Utilita Arena in Newcastle, England, followed by the 2022 Arnold Strongman Classic. These two can serve as great role models for Harry, and it was nice to see the environment they have built for themselves. Tom coming back to work out, even though he does not feel like it, just because it was Harry’s first training session, really shows the love they have for each other.