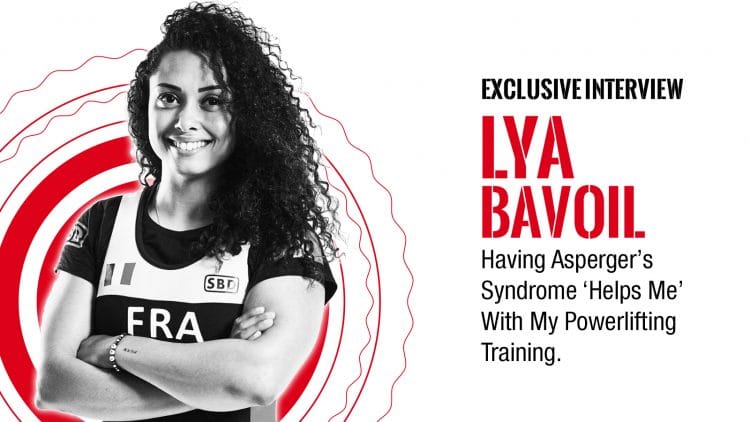 French powerlifting sensation Prescillia “Lya” Bavoil has been doing some pretty good things in the sport over the last few years. However things were not always easy for this young athlete, and she opened up about those difficulties recently.

At 26 years of age, Bavoil has already established her place as one of the best 63kg powerlifters on the planet. She proved this by earning world records in the squat and total for the division, earlier this year. Not only that, but she built on this accomplishment by unofficially pushing past those numbers a few months back. The resume that Lya is building shows that she is going to be a force to be reckoned with for many years to come.

Lya Bavoil Is Not Focused On A Specific Goal

With Bavoil hitting these types of numbers in the training room, fans have been wondering when they may see her solidify them in competition. Speaking with FitnessVolt, she explained that she hopes to compete in December, at the Arnold Classic Europe, but she is unsure if travel restrictions may prevent that from happening. Regardless of when she competes though, she is not actually focused on a specific numerical goal, instead just listening to her team, and focusing on putting her best foot forward on the platform.

“I don’t really have goals where I want to do this or that. When I step on the platform I just want to do the best I can on the day, because you never know what can happen. If I’m having a good day, I want to push myself as much as I can, and if I can push the world record squat or the world record total, I would be very happy with that.

“When you have numbers as goals, if you don’t do it in competition, even if you had a great competition, you’re like ‘Yeah, but I didn’t do what I wanted to do, blah blah,’ and you’re disappointed. So I’m not going into competition like I want to hit this or that, I’m just going into competition like ‘Do I feel great, do I feel bad?’ and adjust accordingly. If I feel great then I just give everything I can and everything I have on the platform, but not with real numbers in my head.”

As for the weight that she moves, Lya Bavoil says she does not decide that. She lets her team determine how much gets put on the bar, based on how they think she is doing.

“I don’t really choose the lift, it’s the French team staff that chooses, because they know the match. I don’t know it, I don’t want to know what the other lifters do. I just concentrate on myself, and (my team asks) if they put that, is that okay with me, and I say if it’s okay or it’s not.”

Lya Is Her Own Rival

The last few years have seen a huge jump in the quality of young talent in powerlifting, including Lya Bavoil, herself. Yet despite having a ton of competition in the 63kg ranks, she is not focused on any sort of rivalries. All Lya cares about, is giving it her all everytime she competes.

“I don’t see the other competitors as rivals, really. For me, I just want to give everything I have on the platform, so if I have a rival, it’s me.”

That being said, one would think that Bavoil struggles with staying motivated. If she is not looking at her peers as rivals, and she does not set her sights on specific goals, then what keeps her going, day in and day out? To her, it is all a matter of loving the feeling of really pushing herself, whether in practice or competition.

“(My motivation is) to always be better. Not better than someone else, but better than I was yesterday, or the months before. Just keep pushing hard, and keep trying to reach perfection. There is no perfection, but there is always something you can work on, with technique and form and things like that. So I just want to be better every day.”

Of course, the type of drive that Lya Bavoil has is clear, and not just in competition. Her Instagram is constantly filled with training videos, and mock meets that are constantly showing how much she is improving. She describes her training as very structured and disciplined, only taking two days off a week.

“I train five days a week. I do four squat, five bench, and two deadlift, and I essentially just do competition lift,” Bavoil said. “(I train) heavy like two days a week. My favorite exercise, and it always surprises people when I say it, but it’s bench press. I like bench press because you don’t have to wear the sleeves, you don’t have to wear the belt. I feel free, and I don’t feel very tired after bench sessions.”

As far as her diet and nutrition is concerned, like most young athletes, Bavoil is learning on the job. Initially she was trying to figure things out on her own, but once she started working with a nutritionist, things began to fall into place.

“It depends on the day, but sometimes I eat three or five times a day. It depends on my day, if I work or not, or if I wake up late or not. I have my macros everyday, that I have to hit, like my macros when I train and when I don’t train, but I adjust it with my meals. I’m around 2000 calories per day.”

Lya Bavoil And The Struggles Of Having Asperger’s Syndrome

One of the most fascinating and frankly inspirational aspects of the success of Lya Bavoil, is the fact that she has been super successful, despite having Asperger’s Syndrome. Falling on the autism spectrum, Asperger’s is a disorder that leaves people with it having to deal with anxiety and depression, as well as struggling with social cues and formibg relationships. While Lya was smart, she said that she always had been seeing therapists.

“I had always been going to therapists, from when I was like four or five years old, because I was able to read and write very early, and I went to school at 4, and normally in France it is 6 years old when you start school.”

Unfortunately the research behind Asperger’s Syndrome, and Autism generally, was focused primarily on male subjects. Therefore people like Lya, and other women, have a hard time getting diagnosed. She experienced first hand how lacking the studies are on this matter, leading to her not finding out she was on the spectrum until she was 22 years old.

“(In France) the medical staff doesn’t really know how to see autism in girls. Especially Asperger’s, because there is no mental deficiencies, or disability,” Lya Bavoil explained. “So I figured out I had it when I was 22, because I saw that even being an adult, there is something kind of “wrong” with me, and I couldn’t understand what it was. Like why I didn’t have friends, or why I didn’t understand certain things with people.”

Despite knowing that something was off about her, Bavoil never quite understood what it was. It was not until college that she essentially diagnosed herself, before getting tests done to confirm that she had Asperger’s.

“I’m a teacher, and when I was doing my studies to be a teacher, we studied how to handle children with disabilities. One of the teachers spoke about autism, and Asperger’s and things like this, and I was like, okay it just sounds like me. So I did research, and after that I saw some specialists and did all the tests and everything, and it worked out.”

Dealing With Fears Of Being Judged

Naturally, when. Lya Bavoil found out that she was on the spectrum, she was emotional. She explained that at first she was relieved to find some answers. However she was also quite worried about being judged for her diagnosis, so she kept it very close to her chest at first.

“At first I felt relieved, like ‘Okay I’m not crazy,’ because I really thought I was totally crazy, that there was something wrong with me,” Bavoil recalled. “After that, I was crushed, and I felt very depressed, and I wanted to hide it. I didn’t want people to know it, because they would think I’m stupid. There’s a lot of people who think that autism means you’re stupid, and things like that, and they just make fun of you because of that.

“So for two or three years, only three or four people in my family knew about it. One day I couldn’t hide it anymore, because I needed to do international competitions. Before I didn’t want to go because I was like ‘no, they will discover that there’s something wrong, that I’m autistic.’ There were things I couldn’t handle, like noise and things like this.

“But one day I was like, I want to do international competitions, so I have to do it, I have to tell people, and not hide me anymore. So I did a video and spoke a bit on my social media about it.”

One of the classic signs of Asperger’s Syndrome is a need for things to be a specific way. This type of neurotic feeling does not actually pose a problem for Lya Bavoil. In fact, she says that she thinks this type of mindset is what helps her be productive and successful as a powerlifter.

“It helps me in a way, because I always do the same squat, bench, deadlift, and I feel secure with powerlifting. There is no surprises in training, I know what I have to do every day. I have my plan, and it’s always the same competition lifts.”

That being said, that does not mean Lya had an easy road to get to this point. She still had challenges to overcome, and hills to climb to be successful in the sport. However now that more people are aware of her condition, they are very accommodating to her.

“The challenges were learning how to handle it in public, and in competition. But now that people know, they care about it. They pay attention to me more than other people because they know things like noises can be bad for me. It secures me, and makes me feel great. I’m not afraid anymore to compete in international competitions. Now I have friends in powerlifting and they know it, and they help me.”

At the end of the day, the story of Lya Bavoil is still being written. However no matter how far her skills take her, she will always be able to provide inspiration.

Brandon Curry: ‘My Job Is To Make You Forget About’ Phil Heath