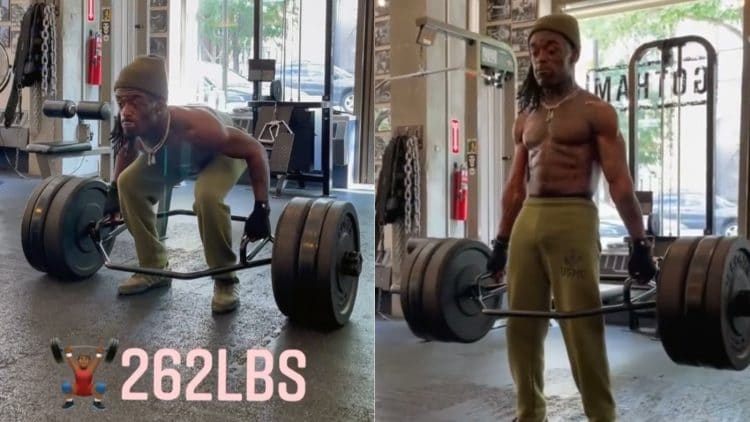 With a 5ft-3in the lean frame, American rapper Lil Uzi Vert can easily be mistaken for someone that does not necessarily lift heavy in the gym. However, looks can be deceiving, and in Lil Uzi Vert’s case, they certainly are!

In a recent video shared on Lil Uzi’s Instagram story, the rapper pulled off 3 full reps of 262lb hex bar deadlift. The video then got reposted by Complex, where the caption rightfully mentioned the rapper as ‘Big Uzi’ – an ode to the feat achieved.

The 268lbs lift in itself is an impressive achievement. However, the fact that Lil Uzi lifted over 1.5 times his bodyweight is awe-inspiring. While his exact weight is unknown, Uzi is assumed to be walking around at 150lbs (68kg) according to multiple sources.

The 26-year-old rapper completed the lift using the trap bar and maintained perfect form and technique to minimize the risk of injuries associated with deadlifts. Uzi’s Instagram Story also shed light on the rest of his workout as he was seen doing curls along with hanging bodyweight exercises.

“When the hell did uzi get yolked!? Did that diamond in his forehead grant superpowers god dam!” commented someone else.

Admirable as the amount of weight may be, Lil Uzi’s choice of bar for the deadlift is the most important detail in the video. A barbell is most commonly used for deadlifts. Barbell and trap bar deadlifts are similar in the range of motion and both exercises train the hip hinge.

However, many experts, including powerlifter Robert Oberst, have expressed their critical opinions about the risks associated with deadlifts on numerous occasions. During his appearance on The Joe Rogan Experience podcast, Robert Oberst stated:

“It’s so hard to be a great deadlifter and to not risk your lower back and to be using your upper back properly. There’s so many chances for you to get hurt. If you go into any NFL gym or any Division One college football gym or any into athletics where people are getting paid and it matters what they’re doing, they’re not deadlifting, they’re hang cleaning and power cleaning.”

As opposed to the straight barbell, hex trap bars are hexagonal and the person lifting the weight stands inside the hexagon. the positioning allows the weight to be close to the person’s center of gravity and puts a lot less shear force on the spine. The risk of injuries associated with the deadlift is considerably reduced as a result.

Lil Uzi Vert’s ripped physique in a recent video posted on his Instagram account shows that the rapper has certainly benefited from the alternate approach to training.

A post shared by Marni Life( NO STYLIST)1600 (@liluzivert)