Life and accomplishments of Robert Oberst 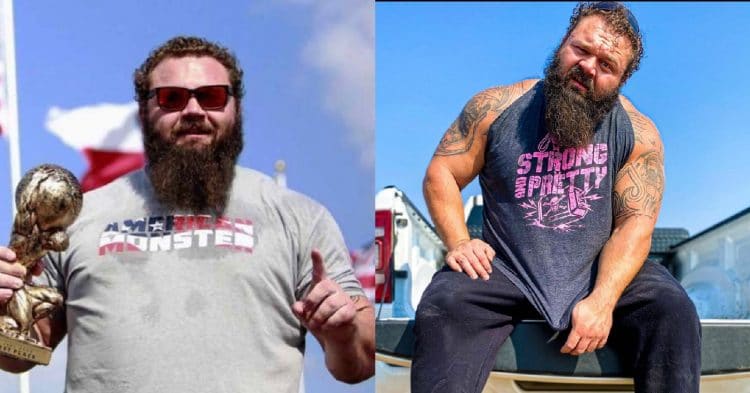 His family didn’t have much money when he was growing up and many times they didn’t have electricity but he and his siblings would wrestle for fun and he’s talked about being absolutely obsessed with the World Wrestling Federation) WWF.

As a school kid, he was noticeably much taller and larger than his peers standing at 6 ft 1 (1.85m) and weighing 220 lbs (99.8 kg) at age 12. He was picked on as a result and even thought about dropping out of high school because of it.

But he had a lot of support from his mother who played a big role in raising him and his brothers and sisters as he barely ever saw his dad who worked 16 hours days. She truly believed that Oberst was special and that he could do anything that he put his mind to, and that’s a big reason why he’s had such a powerful mindset and why he is where he is today.

Oberst attended Aptos High School in Aptos California where he played football and participated in track and field. He always loved being in the gym and the camaraderie of being on the football team in school and because he was so good at it, it gave him incredible confidence and changed his life.

After high school, he played football at Western Oregon University where he also majored in history.

Then after he graduated in 2008, Oberst, like a large majority of football athletes, had his eyes set on playing in the NFL however, it didn’t quite pan out and from there, he took jobs as a club bouncer before being introduced to Strongman by a friend who encouraged him to try it out.

By this time, Oberst was a towering 6’8″ with a massive frame, and just by looking at him, it was evident that he was made for strength sports.

He’s described his experience with Strongman like “being a fish in water.”

After Oberst was convinced to try Strongman by a friend, he proceeded to unofficially break the amateur log press world record in his first session with 150kg/330lbs. At this point, continuing his training was a no-brainer and it most certainly paid off.

He had a great year in 2013, winning the Giants Live Las Vegas and the Odd Haugen’s US Open MAS Wrestling Championships. However, he hasn’t had much success since where winning is concerned, although he was the runner-up at the 2013 and 2014 America’s Strongest Man and finalist at the prestigious World’s Strongest Man contest in 2013 and 2018.

But Oberst is qualified to compete at the 2020 World’s Strongest Man competition that is set to take place in Bradenton, Florida November 11-15. So, we’ll see how he does against a very stacked lineup this year

Oberst is a Strongman and so he trains accordingly. We’ve provided some of his workouts below.

This shoulder routine is different than most because it involves training heavy for 3-4 sets of 2-4 reps, then dropping the weight, doing as many reps as possible, dropping the weight once more, and repping out once again. According to Oberst, this helps with recovery and it builds density, therefore increasing strength over time.

Drop the weight by half and do as many reps as possible.

Drop the weight again and continue to rep out as much as possible.

Oberst does a set in front of the body and one set behind the body per each set.

Oberst uses a closer grip on the bench press than what is typically used to build the chest because he wants to also involve the triceps more. For this superset, he’ll do one set of the bench press and then jump immediately into the military press.

Oberst does a powerlifter and bodybuilder training routine that allows him to benefit from the best of both worlds. This routine places a large emphasis on the shoulders and a little on the chest too. He also trains his upper body two-three times per week.

Oberst has talked about what he wished he would’ve known when he started training and while he knew what to expect, for the most part, there were some things that he would have done differently regarding training.

“I wish I knew the importance of a healthy core and stretching your hips in the right way. There’s a lot of maintenance stuff that I just didn’t pay attention to that caught me after a couple of years I was beating myself up.”

He knew that he needed to do certain things for longevity and to maximize his performance but was very hard-headed. Now he doesn’t neglect the important aspects of performance and health because playing catch up was no fun.

He also explained that there’s no money in Strongman for most athletes. However, he was able to be successful because he knows how to be a showman whilst also being a competitor.

“I’ve been very blessed and I know how to present himself in such a manner. I’ve done just as good at the show business part as I have with the weight lifting part and that’s important. There’s just stuff you can’t teach.”

Oberst also knew that Strongman competition would be his full-time job when he got into it which was due to the confidence and surety he had in himself. But he certainly wouldn’t discourage anyone who wants to do Strongman from doing it.

Robert Oberst did an interview with London Real where he talked about the best Strongman workout diet. And what was really surprising is that he mentioned only being 20 pounds heavier now than what he was in high school.

Oberst explained that he eats lots of meat and rice with 4-5 small meals throughout the day. He even eats rice and eggs for breakfast. Although, you can find many videos where he’s taking on eating challenges with fellow Strongman athletes.

Oberst does online coaching from his website, theamericanmonster.com where he also sells merchandise. He also stars alongside other top Strongman athletes Brian Shaw, Eddie Hall, and Nick Best in the History channel series The Strongest Man in History.

Robert Oberst is not only one of the strongest men on the planet; he has a larger than life personality. Despite never having won the big competitions, he’s been a welcome figure to the sport of Strongman for everything else that he brings to the table.

It’s a good thing he took his friend’s advice and took up Strongman because he’s good at it and we’re expecting him to put on a show at the upcoming 2020 World’s Strongest Man competition in November.