Olympic barbells are a standard length, diameter, and weight, but hex bars come in all sizes. In this article, we reveal the average weight of hex bars and discuss the origin and some of the exercises you can do with this popular piece of equipment. 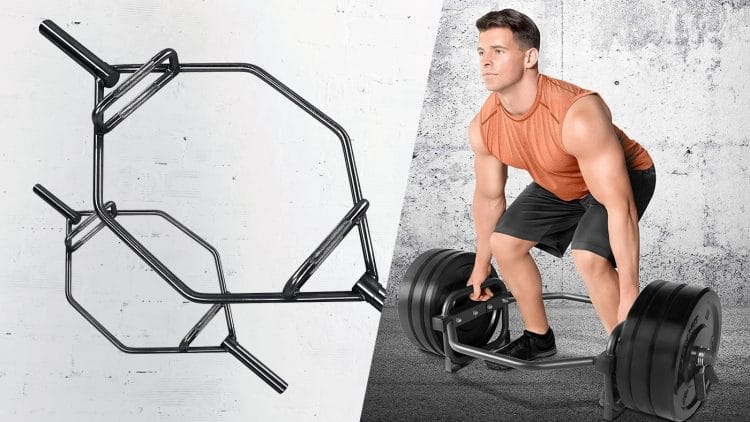 How Much Does Hex Deadlift Bar Weigh

Barbells come in all shapes and sizes, but Olympic barbells should all be identical. That’s important because, in competition, standardization matters. If Olympic barbells differed in size or weight, it would be impossible to ratify records.

While you might not be an Olympic lifter, knowing what your bar weighs is still important.  After all, you don’t want to load it with more weight than you can lift. It also makes keeping track of your progress easier.

But what about hex bars? What do they weigh?

Currently, hex bars come in all sizes and weights. There is no standard design because they aren’t used in weightlifting or powerlifting competitions.

In this article, we take a look at why and how to use a hex bar and how much these training bars can weigh.

What Is A Hex Bar?

A hex bar, also known as a trap bar or Gerard bar, has a diamond-shaped frame that allows you to stand between two parallel handles. Some hex bars have raised handles, while others have handles that are flush or level with the rest of the bar. Some hex bars have both options.

Hex bars are primarily used for deadlifts, but they can also be used for other exercises, although Olympic barbells are arguably more versatile. After all, you can’t really do biceps curls or skull crushers with a hex bar.

The hex bar was invented in the 1980s by drug-free American powerlifting champion Al Gerard. Throughout his career, Gerard suffered from back pain. At times, his back was so bad he could not do conventional deadlifts.

One day, Gerard tried doing deadlifts with two 100-pound dumbbells instead of a barbell. He found that having the weights next to him rather than in front took a lot of stress off his lower back. Inspired by this discovery, he designed a frame that he could use instead of the unwieldy dumbbells, and the Gerard bar was born.

Gerard made and sold his bars throughout the 1980s and early 1990s, but quantities were small and, eventually, he went out of business. Once Gerard no longer held the exclusive license to make his bars, other manufactures started producing them, and they become very popular.

How Much Does A Hex Bar Actually Weigh?

While hex bars come in various sizes and weights, hex bar manufacturers do seem to work within a range – 15kg to 30kg being the norm, which is about 33 to 70 lbs. 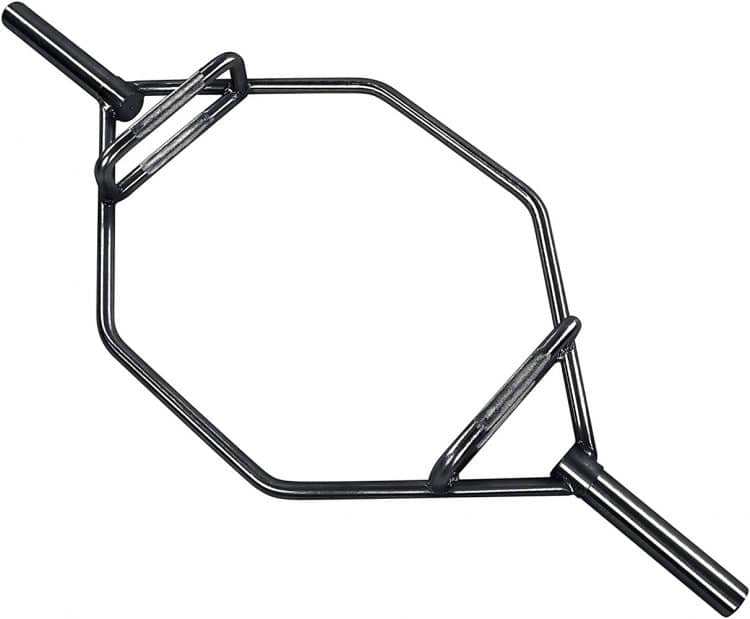 15kg / 33lbs – hex bars that weigh 15kg / 33lbs don’t usually have raised handles and aren’t suitable for super-heavy training. Think of these lightweight bars as ideal for home or general fitness workouts. Shorter and smaller in diameter than heavy-duty bars, lighter hex bars are ideal for occasional use, women, and smaller exercisers.

20kg / 44lbs  – this is probably the most common weight for a hex bar, and it’s the same as a standard Olympic bar. 20kg / 44lbs hex bars usually have two pairs of handles (raised and level) and can hold a decent amount of weight. This is the sort of bar you’ll find in an average gym and are suitable for 90% of exercisers.

25kg / 55lbs – bars are more heavy-duty and can hold significantly more weight. They may be larger too, so they can accommodate taller, heavier lifters or a wider stance. Football teams, powerlifting gyms, and other advanced lifters tend to use this type of hex bar.

30kg+ / 66lbs+ – strongman competitors lift huge weights in training. They need a much stronger, higher-capacity trap bar for exercises like farmer’s walks and deadlifts. Hex bars that weigh 30kg / 66lbs or more are specialist items and may even need to be made to order. The average gym goer will probably never see or use such a bar.

What Exercises Can You Do with a Hex Bar?

Hex bars can be used for several lower and upper body exercises. Some of the best hex bar exercises include: 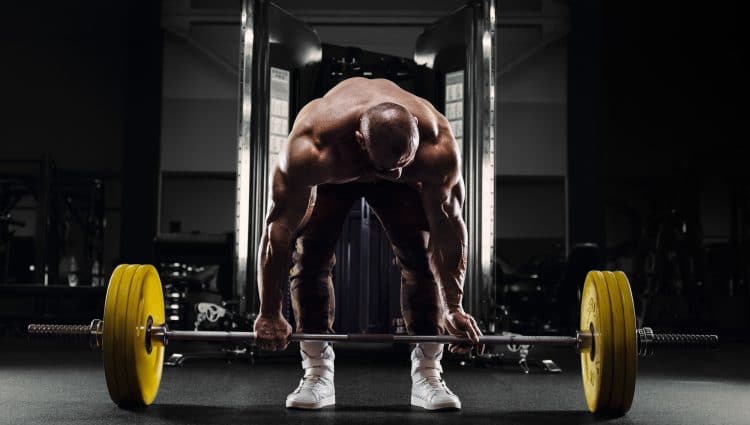 Doing deadlifts with a hex bar means the weight is in line with your feet and not in front of you as it is with conventional or sumo deadlifts. This allows you to maintain a more upright torso, use your quads more, and reduces the pressure on your lower back.

Related: Hex Bar vs. Barbell Deadlift – Which One Should You Do?

A hex bar means you can do barbell overhead presses with a parallel grip. Some lifters prefer this hand position because it’s more shoulder-friendly. You will, however, need to put your bar in a squat rack. It’s almost impossible to clean a trap bar up to your shoulders.

Shoulder pain is a real problem for a lot of lifters, and one of the most common causes is barbell bench pressing. Using a hex bar means a more shoulder-friendly parallel grip. This means you can continue working your chest without aggravating your joints. You can do hex bar bench presses in a squat rack or floor presses. Both exercises are similarly beneficial, although floor presses are even more shoulder-friendly.

Using a hex bar means you can keep the weight in line with your base of support, i.e., your feet. This means, when you lean forward to do bent-over rows, there is much less strain on your lower back. Therefore, you are free to focus 100% on working your lats.

Squat jumps are a great lower body power exercise. People sometimes use dumbbells or a barbell to make them more challenging. However, dumbbells tend to bang against your legs while a barbell is tough on your spine. Using a hex bar is the perfect alternative and allows you to do weighed jumps more safely and comfortably.

Like conventional deadlifts, hex bar Romanian deadlifts are much easier on your lower back than the barbell version. Using a hex bar means you can focus more on working your glutes and hamstrings and worry less about hurting your lumbar spine.

Hex bars are also known as trap bars because they are ideal for working your upper traps. Unlike dumbbells, the weights won’t bump into your legs, and your shoulders are in a more joint-friendly position, making them safer and more comfortable than barbell shrugs.

Call them hex bars, trap bars, or even shrug bars, Al Gerard’s training invention is an excellent alternative to Olympic barbells. While you can’t do as many exercises with a hex bar as you can with a regular barbell, they’re a valuable tool for deadlifts.

You can also use them for several other lower body and upper body exercises. If you are looking for a new way to add variety to your workouts, or just give your overworked lower back a rest, a hex bar could help.

However, because hex bars come in a wide range of sizes and weights, it’s important to check how much your bar weighs before using it. That way, you’ll know exactly how much you are lifting.

If necessary, use small plates to round the weight up and make it easier to calculate your training weights. For example, put two 2.5kg plates on a 15kg hex bar, so it weighs the same as an Olympic bar.

Don’t forget to take into account the weight of your collars, too. While spring collars weigh next to nothing, calibrated Olympic collars weigh 2.5 kg/5.5 pounds each.

Ultimately, however much it weighs, hex bars are valuable training tools that can be used to achieve almost any training goal, from bodybuilding to powerlifting to weight loss.