Instagram's hottest fitness sensation addresses the natty or not speculations 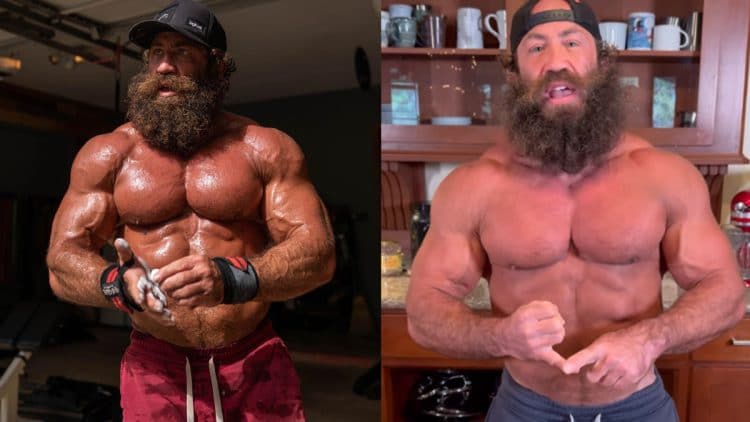 Brian Johnson AKA Liver King burst onto the Instagram influencer scene back in August of 2021 with a badass-looking semi-motivational video promoting his lifestyle and his supplement company.

Brian Johnson promotes the “ancestral” way of living, the way our forefathers used to live. That would mean, hunting your meals, eating organ meat raw, and living off the land. The concept in itself isn’t anything new but Brian looks super jacked, has a beard that would make Santa Clause jealous, does “ancestral” and/or functional types of workouts that look cool on Instagram, and on top of all that- he has a badass sounding name; “Liver KIng”.

Liver King mocks the “natty or not” callouts

After that first video, his content spread through the Instagram algorithm like wildfire and he was at the tip of everyone’s tongue. With Liver King’s popularity and message reaching more and more eyeballs each day, it didn’t take long before the “natty or not” callouts started happening.  Despite not really engaging the callouts and just ignoring them most of the time, for this occasion he had something else in mind.

A post shared by Brian Johnson AKA Liver King (@liverking)

The video starts with two needles filled with unknown substances being zoomed on in front of Brian Johnson and as the camera pans out we see they are stuck in something and the Liver King starts us off with the following;

Liver King here, a bunch of primals keeps asking if Liver King is natty or not. I decided to really address this head-on and show you my stack.

He then proceeds to say that he “stacks” liver and bone marrow every day, that he “stacks” sun and the earth every day. He continues down this list of things he “stacks” with a mocking tone implying he is 100% natural and what he does is achievable purely through his “primal” lifestyle, homegrown food sources, and a rigorous workout routine, and then he ends the video saying that the needles are filled with maple syrup.

That’s Liver King’s answer and it’s as good of an answer as we’ll probably ever get from him on this subject. However, some YouTubers attempted to take a crack at the Liver King and see what they think of his lifestyle and “natty” claims and they all pretty much come to the same conclusion- the numbers don’t add up.

Brian Johnson is 44 years old, claims to train twice a day, seven days a week while maintaining a PED-free single-digit body fat thanks to his raw organ meat diet and ancestral lifestyle. It all seems very suspicious and highly unlikely, to say the least.

A post shared by Brian Johnson AKA Liver King (@liverking)

My biggest questions are what’s the point? What’s the goal? It would be cooler if he lived off grid and didn’t use electricity. I also think we need to recognize that our ancestors had fire and not everything wasn’t eaten raw. Not everyone ate raw meat.

The Liver King promotes some sound things. He also is on some type of gas and PEDs. Yes, that’s probably part of the marketing and sales pitch, but this is the one aspect that bugs me like crazy. Go on full gas and then pretend that eating raw meat leads to such a physique? Ultimately I think we will find out there are some phenomenal marketers and investors behind him that lead to this rise.

I, myself tend to agree with Dane Miller with the above. He is a great product of a team that saw dollar signs in Brian Johnson and approached his social media persona with a solid budget and a 5-year plan. If Brian and his family are getting financially compensated for their roles in this “Liver King” mythos that is being built, then good for them. Brian gets to be paid for looking shredded and badass doing what he claims he likes doing and his family gets food on their table by him doing so. Not a bad deal if you ask me.

As for him claiming to be “natural, I’m highly doubtful of it for three reasons;

1. He has a bulging turtle shell six-pack, which kinda reminds me of a HGH-induced “bubble gut” that modern day pro bodybuilders are known for. Bubble gut is a good sign that someone is consuming some kind of hormones or anabolics.

2. He is 44 years old with a shredded jacked physique and and serious strength to back it all up. He could easily give any Powerlifter/CossFitter half his age a good run for their money, strength-wise. If you ever stepped foot inside a gym and tried achieving that holy trinity of gym goals( shredded, strong, and big) at once, you know how insanely difficult it is to do it naturally. As soon as you start peeling off body fat, strength tends to slowly wither away with it. Vice versa, when you start gaining size and strength, body fat starts creeping up on you like that paper you haven’t even started doing and the clock says it 30 minutes until your deadline.

3. Hardcore survivalists who actually live off the land and practice the “eat what you kill” lifestyles such as Bear Grylls, Les Stroud, or Glenn Villeneuve look nothing like the Liver King who has single-digit body fat year-round. Although to be fair to the Liver King, he often mentions that he lives on a giant farm with his own chickens, cows, and some wildlife near/on his land. So I’m assuming he doesn’t have to go deep into the forest and eat bugs and drink mud puddles for 5 days just so he can hunt a moose.