Brandon Curry has shown notable leg developments in preparation for the Arnold Classic. 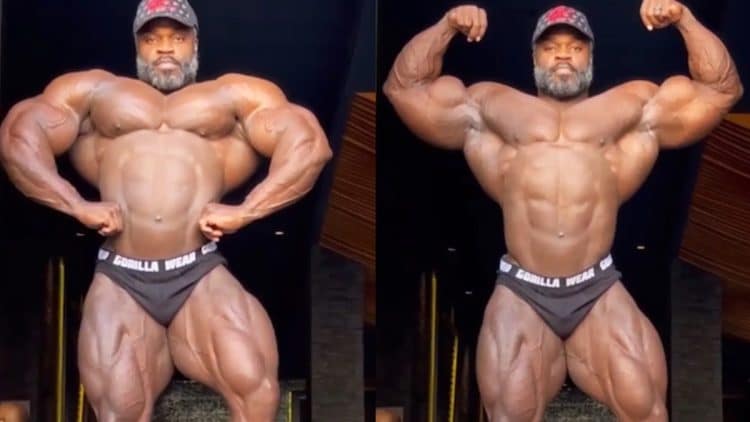 Brandon Curry is making dramatic gains while preparing his body to take the stage next month. Recently, Curry revealed a physique update, and while the bodybuilder wouldn’t say exactly when the video was taken, he’s confirmed it’s from his current prep.

Before Mamdouh Elssbiay emerged as a bodybuilding juggernaut, Curry was thought to be the one to beat at any given show. In 2019, Curry dominated the two biggest bodybuilding shows of the year. First, Curry won the Arnold Classic when he defeated William Bonac and earned $130,000 in prize money. Following the major title victory, the rivalry between Curry and Bonac heated up again when the two took over the Mr. Olympia stage. Once again, it was Brandon Curry who secured first place.

Curry placed runner-up to Big Ramy at 2020 Mr. Olympia. In 2021, the bodybuilder was unable to make the requisite changes to his physique (especially his legs) and fell to Big Ramy at Olympia again. While it’s not the biggest bodybuilding show of the year, Curry is still looking to snap his streak of second-place finishes at the 2022 Arnold Classic set to go down from March 3-6.

Without Big Ramy in attendance, it would seem Curry is a definite favorite heading into the March show. While some have criticized Curry’s legs as his weakest point, the bodybuilder put those notions to bed in his latest physique update.

Brandon Curry sharing a recent physique update is a rarity. While the 2019 Arnold Classic winner often posts his physique on social media, it’s usually a picture from previous prep periods. Curry made it a point to announce that this update is from his current prep for the Arnold, though wouldn’t say from exactly when.

“🚧UNDER CONSTRUCTION 🚧
Alright alright…I won’t say exactly when this video was from, but I will say that it’s from this prep. When this video was taken it was on an empty stomach post morning cardio so I was flat. 😄
@arnoldsports I’LL BE BACK
Brandon Curry shared Wednesday.

Following Curry’s second-place finish in 2021 Mr. Olympia, his coach, Abdullah Alotaibi took issue with what he perceived as inconsistent judging. After following the judge’s recommendations and making sure Curry came in lean and shredded, he still placed in second which left Alotaibi upset.

RELATED: Brandon Curry Reacts To Getting 2nd At 2021 Olympia: ‘I Gave It My Best’

2021 Arnold Classic champion Nick Walker is taking the Arnold Sports Festival off to improve his physique for Olympia. Curry can pick up right where he left off in 2019 barring his stage presence and conditioning remain on point. With the recent physique update of Curry, the bodybuilder has clearly taken criticisms with stride as his leg definition looks drastically improved.