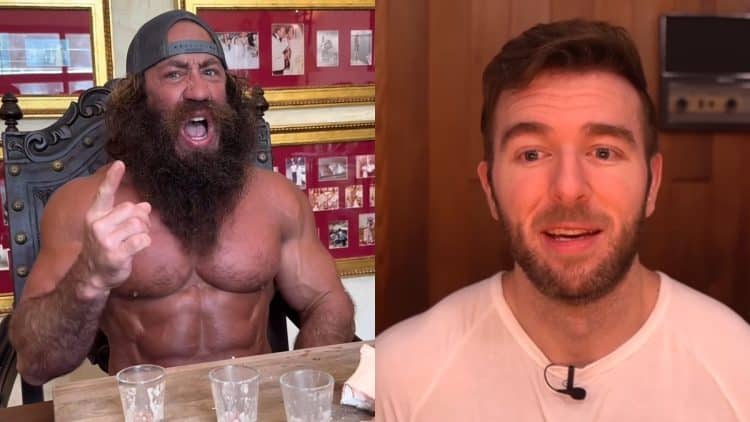 Liver King (real name Brian Johnson) has become one of the most talked about natty or not subjects since Mike O’Hearn. Despite consistent claims of being natural, Liver King is now under scrutiny from PED expert Derek of More Plates More Dates (MPMD) after his blood work and steroid cycles leaked via email.

Brian Johnson, well known as Liver King, skyrocketed in popularity over the past few months. He advocates for eating raw organ meat like liver, which he credits for helping him maintain a rugged and ripped physique year-round. In addition to the obscure diet, the 45-year-old lives by the nine ancestral tenets, a practice that centers around community, health, family, and wellness.

UPDATE: Liver King Confesses to Steroid Use After Leaked Email

While on his mission to spread the ancestral style of living, Liver King has mentioned time after time that he’s 100 percent natural. Eventually, those claims ruffled the feathers of podcast giant Joe Rogan, who has publicly denounced Johnson’s lifetime claim of being natural. In fact, Rogan went so far as to say Liver King has an ass filled with steroids.

Clapping back at these allegations, Liver King went on a number of podcasts over the last few months and continued to claim he never ‘touched the stuff.’ Until now, there was no concrete evidence to suggest Johnson was using such compounds. In one of PED expert Derek’s recent YouTube videos, a leaked email described Liver King’s full steroid cycle. Additionally, Derek from MPMD analyzed Johnson’s blood results.

Last June, Liver King sent an email to Derek from YouTube’s More Plates More Dates in regard to his overall health and steroid cycle.

“As it relates to my goals, I’m the face of several brands, including Ancestral Supplements, and I’ve just hired a team to build the Liver King brand with the goal of 1MM followers by March 2022 — I’m pouring ridiculous resources into making this happen including hosting a video guy, that will be living at my guest house, and a film crew that will be filming 7 days a month… stated.

I have to stay in great fuc**ng shape year-round (maybe take 1-2 months off / year). Here’s a clip of where I’m at currently

Liver King specified he was spending $11,000 USD per month on Growth Hormone.

“I’ve been working out for 35 years. I know how to eat, train, rest and recovery (I even have a hardshell hyperbaric chamber at my house) … but… as I’ve reached my mid-40’s, It’s getting harder and the back fat fuc**ng kills me. To support these exhaustive efforts, I’ve recently started taking Omnitrope… the 5.8 MG vials from Empower Pharmacy ($11K USD per month for my new dose which is 4 vials/ a week — 16 vials/month).”

In the email, Liver King suggested that he might be a ‘hyper non-responder’ since he takes two vials of IGF-1 per week and is only at 139. In the list below, Johnson provided each compound he was taking at the time.

“I don’t know if this shi* is grossly underdosed or what but I’ve been taking two vials per week and my IGF-1 is only at 139. (see recent labs below). My doctor told me that I could double it in an effort to get to the upper 200s/low 300s. She thinks I could be a hyper non-responder??? I’m wondering if taking a fu** load of peptides could be confounding the results and possibly interfering with efficiency. For instance, here’s what I’m currently taking…

According to Derek More Plates More Dates, Liver King is taking a high amount of growth hormone based on the information that was provided.

“He mentioned in his email here 16 vials a month. So, that is going to be roughly 69.6 international units of recombinant human growth hormone per week, which is roughly 10 international units per day, which is like a fuc**ng really really high super expensive dosage that to be honest — I know bodybuilders who compete in the Open Mr. Olympia who use less pharm-grade GH than that. That’s how high of a dose that actually is,” Derek said.

He acknowledged that Liver King’s GH dose is quite high whereas his testosterone dose is on the lower end.

“120 milligrams per week of test cyp that’s not that high,” Derek said. “These are [all] prescribe-able. Even Winstrol which sounds fuc**ng baffling. And to actually have like a clinical application to makes sense — very rarely, but presumably he has a script for it. I doubt he’s using UGL Winstrol randomly as his choice of compound.

There are fewer compounds to choose from. Like you’re not going to get Trenbolone through a fuc**ng pharmacy, but Winstrol, one of the available orals that he arrived on presumably to add in,” Derek said.

Before concluding the email, Liver King added that some doctors thought his Insulin levels were too low.

“My blood sugar (every morning it’s around 74) and Insulin are great because I’m metabolically fit as fu** or so I think… some docts think my insulin is too low but I think it’s bc I’m very insulin sensitive bc I work out like a fuc**ng maniac i.e. I train twice a day. 6 days a week and walk 10 to 12 miles on my rest day. Can you help me dial in the PED and growth hormone protocol to maximized results?

You will see that my healthy labs back on 5-12 look pretty good (except IGF and GH are always non-existent). My recent labs show some serious concerns, probably the Winstrol, but we’re discontinuing that in 2 weeks anyway. SHBG, Lipids, E12 are all fu**ed… but aside from my joints, I feel pretty good,” ” Liver King added via email.

In a follow-up email, Liver King provided blood work and broke down his daily schedule, which included his meals, gear, and supplement stack. Derek shared his synopsis of the information but admitted there was a lot to sift through.

“I wanted it [this blood work analysis video] to be this succinct, concise, cursory overview of all of the blood test metrics but he has a decent amount of blood work and to do it the justice it deserves from an analysis context. It ended up being pretty long. Instead of detailing that video, I’m going to make the blood work analysis a totally separate video for you guys.”

The last time fans heard from Derek MPMD he talked about UFC star Conor McGregor’s dramatic physique transformation. In a recent update, ‘The Notorious’ shared his bulky frame. He described his physique as a mix of Bruce Lee and bodybuilding legend Arnold Schwarzenegger. After taking a closer look, however, Derek suspects the Irishman used photoshop or PEDs to enhance his build.

Considering the depth of information provided by Derek, it’s hard to ignore his findings. Fortunately, Liver King is known for responding to his critics, so fans can expect to hear his side of the story soon.