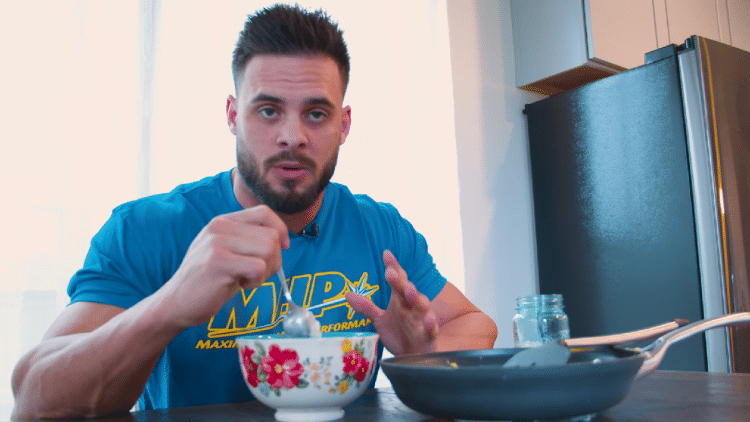 Logan Franklin is a top notch Men’s Physique bodybuilder. Now, he shares what kind of breakfast he eats, to get his body going in the morning, during the off-season.

Franklin is a Men’s Physique competitor, who has participated in many contests over his six year long career. Although he has yet to win an event as a professional, every time he comes to the stage, he looks better and better. The improvements he makes leads some to believe that he could eventually get his body to a point of being a champion. Especially now that he is looking to make the move from Men’s Physique to Classic Physique in 2020.

One of the big things that Franklin uses to get himself to improve, is to properly utilize his off-season. Some bodybuilders will slack off during their off-season, and not take their diet so seriously. This is not the case with Logan though, as he takes his training and diet very seriously during the off-season too. As a result, he is able to constantly improve, and work towards his goal of transitioning to the new division.

So what goes into the off-season diet of Logan Franklin? Well he sat down with Muscle & Strength to talk about just that. In particular, he explains what he eats for breakfast when he is not preparing for competition.

This is what he eats:

“I’m eating three whole Omega-3 eggs. These are the highest Omega-3 count that I could find in the grocery store, so 300mg of Omega-3 per egg. Some liquid egg whites, and I’m going to do three packs of grits.”

Franklin goes on to explain that he sometimes prefers to simply drink the 200g of egg whites instead of cooking them and eating them. He likens the taste to something similar to milk when drinking them. He jokingly said that he used to always drink milk as a child, so it is a win-win for him.

Logan goes on to detail how he is different than most bodybuilders in the sense that he makes his own meals in the off-season, from the best quality ingredients. Then he explains that he currently is eating 3 packs of grits, but will likely up that to 4 because he has been losing weight. He says that he just has not been getting enough carbs, so he needs to make the change.

Franklin then adds pink Himalayan sea salt to both the whole eggs, and the grits. He likes to get his sodium levels high for his workouts throughout the day. After that, everything is ready to eat, as he humorously eats the eggs straight out of the frying pan.

In total, Logan Franklin eats around 602 calories, 20g of fat, 63g of carbs, and 45g of protein for his morning meal. Not bad for someone, who is looking to make the transition from Men’s Physique to Classic Physique.