Life and accomplishments of Logan Franklin. 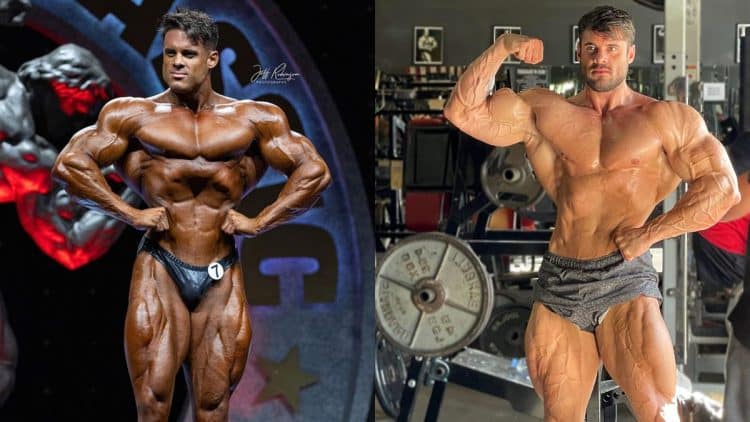 Franklin was born in Texas in a military family and had an active childhood. He participated in football and baseball and raced in motocross during high school.

The Texas Oak has previously admitted that he was smaller and weaker than other kids his age in high school. He was the only kid on his football team who could not unrack the barbell on the bench press and felt extremely embarrassed about it.

“I was a smaller kid, and I just didn’t want to get picked on by anybody who thought they were better than me because they were bigger.”

The incident in the gym pushed him to work on building strength and muscle mass. Logan’s father, a regular exerciser, took him under his wing, and junior Franklin started training in his home gym at the age of 14.

Since Franklin grew up in a patriotic environment, he always wanted to follow in his grandfather and father’s footsteps and join the army, which he did at the age of 18 after graduating from high school. Logan had built a solid physique by that time, thanks to the four years of hard work and discipline in the weight room.

Franklin served in Afghanistan and was on duty when the Navy SEALs took down Osama bin Laden in Pakistan. He was in Afghanistan for 13 months before being sent to Seoul, South Korea, where he served for four years.

During his five years of active military service, Franklin trained regularly, but the thought of competing never crossed his mind. However, all of it changed when he attended the 2014 Mr. Olympia to take part in photo shoots.

Watching the bodybuilders on stage, Franklin fell in love with the sport and decided to try his hand at competing in the Men’s Physique division. The Texas Oak believed that his physique was almost on par with the athletes he saw on stage, and he could give them a run for their money.

“I just trained to be as lethal of a soldier as I could be. As I got closer to the end of my service, I discovered social media, specifically Instagram, and that is where I was introduced to the fitness world.” — Franklin in an interview with M&F Magazine

“I didn’t have parents that competed. I wasn’t in the gym at 12 or 13 years old, and I didn’t have any magazines. Social media was what helped me get into bodybuilding.”

In true military fashion, Franklin wasted no time and got straight to work, earning his Pro Card in the Men’s Physique division by winning the NPC Nationals in the same year he attended his first Olympia Weekend.

The Texan revealed it took him four months to prepare for his first show, the Formulation 1 Classic in his hometown, where he earned first place in the Class D open.

After earning his pro card, Franklin had a rather lackluster start to his career. His humble finishes in 2015 made him take a step back and reassess his approach.

Although Franklin slipped to the sixth spot at the 2017 New York Pro, he more than made up for it by winning his first pro show—the 2017 Europa Dallas. Plus, he jumped two places to finish seventh at the Olympia in the same year.

2018 was a mixed bag for the army veteran. He took fourth place each at his maiden Arnold Classic and the Sheru Classic Colombia Pro. Although he won the 2018 Tampa Pro, he fell to the eleventh position at the Olympia later that year. His performance at the Olympia sowed seeds of doubt in his head about his future in the division.

Switching from the Men’s Physique to Classic Physique Division

Although Franklin took home a respectable fourth at the 2019 Arnold Classic—the second biggest bodybuilding show after the prestigious Mr. Olympia—he felt something was amiss and decided on switching divisions.

“I just felt like I wasn’t placing any better. I kept bringing what I thought was my best look for Men’s Physique, and to be honest, I didn’t understand why I wasn’t placing better. It appeared to me that it was pretty much an abs show. Some of these guys had better abs than me, but I felt my physique overall was better. I decided to take the leap.”

Switching divisions was the right decision for Franklin as he placed third at the 2019 Tampa Pro, his first show as a pro Classic Physique competitor.

The Texas native polished his physique further and decimated his competition to take home the 2020 New York Pro title. It also qualified him for his maiden Olympia as a Classic Physique competitor, where he placed ninth.

2021 was a disappointing year for the army veteran as he could not qualify for the 2021 Olympia even after placing second and third at the Texas Pro and Arnold Classic, respectively.

However, Franklin qualified for the 2022 Olympia on Nov. 20, 2021, by winning the Shawn Ray Hawaiian Classic and has since excused himself from competing to focus on the Olympia.

Given below is The Texas Oak’s complete competition history:

Franklin follows a five-day training split and takes two days off training to allow his body time to recover from his grueling workouts. For cardio, the Texan does about 30-45 mins on the Stair Master—two or three times a week as he believes it works the best for him.

“That never quit attitude that burns inside me came from my service. That mindset of ‘you’re not finished until the job is done’ and ‘you can always do more’ carried over, in my opinion. The discipline, the waking up at 5:40 AM to make flag call at 6:30 AM, then go run three to five miles in formation with a six-minute mile pace, and ignoring the weather, even if it’s freezing, raining, snowing, or if it’s over 100 degrees outside and you have a 75-pound ruck with equipment and a weapon – it makes bodybuilding prep feel easy.”

The Texas Oak follows a high-intensity and volume training regimen and seldom does less than ten reps on any exercise. He incorporates the progressive overload protocol in his training and chases a pump.

Unlike his peers, Franklin doesn’t switch between a bulking and shredding phase. Instead, he stays in photoshoot-ready shape throughout the year.

“Dieting is a crucial factor when it comes to living a healthy lifestyle and progressing in the gym. I choose to stay lean year-round. I never go through a bulking phase, it doesn’t appeal to me.”

Given below is Logan Franklin’s diet plan:

Logan Franklin uses the following supps to supercharge his physique:

Franklin has an old rivalry with the three-time and reigning Classic Physique champ Chris Bumstead. The elite bodybuilders have previously taken jibes at each other, but the Texas Oak has not yet been able to give CBum a run for his money in a contest, but hopefully, that will change later this year.

Logan Franklin will be coming to the 2022 Olympia with a vengeance as he could not qualify for the 2021 Olympia. He last competed at the 2021 Shawn Ray Hawaiian Classic and has since been on an extended break. The Texas Oak is busy working on his physique to bring his best package to the 2022 Olympia, scheduled between Dec. 15 to 18 in Las Vegas, NV.

“I’ve got 12 months until the Olympia, and I can be healthy and make the progress I need. I want to be the guy that takes out the guy that everyone says can’t be beaten. Taking the time and putting everything into that show will give me the best opportunity to do that.”