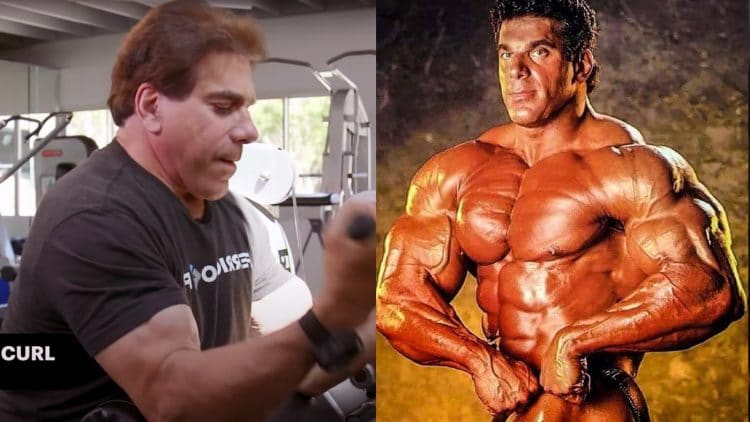 You may know Lou Ferrigno from the Incredible Hulk TV series that aired back in the late 70s and early 80s. But if you know anything about bodybuilding history, well, you’d know he’s a legend of the sport, having competed against Arnold Schwarzenegger.

The actor and fitness icon recently shared his chest and arms workout routine with Men’s Health where he talked about his training background and also offered some very valuable tips.

Ferrigno started off by acknowledging that many exercisers will ego lift or try to impress others by lifting more than they should be lifting.

This doesn’t make him too happy, after all, he is the Incredible Hulk and you don’t want him to get angry about your form!

Changing his physique for roles and being an OG

Ferrigno explained that it’s possible to change your shape and size of which he did many times throughout his film career. He was 285 lbs ripped for his role as Hercules but said he cut down about 30 lbs for Sinbad.

When he first started training to become a bodybuilding champion, there were apparently not too many impressive physiques in films. Ferrigno was one of the originals to display such a freaky body on screen.

“The only muscular guy you’d see on the screen was Paul Newman, you used to see his abs.”

However, that changed as the years progressed with the most famous movie star physiques like that of Dwayne “The Rock” Johnson and Sylvester Stallone.

Makeshift Barbell and How Bodybuilding Made Him a Warrior and Fighter

Ferrigno was very poor which meant he couldn’t afford gym equipment. So he went to the junkyard where he found the supplies to make a makeshift barbell using a broom handle and pales filled with cement.

The rest was history as Lou Ferrigno found his true passion in life and this helped him to succeed at many things that he pursued.

“The great thing about bodybuilding and fitness, it gave me that discipline to do anything I want to do, nothing holds me back, that’s what made me a warrior and a fighter”.

Before anything, Ferrigno hops on the treadmill for 10 minutes to warm up before he trains. It’s important to get the blood flowing before training, to prevent injuries, and maximize performance.

This can be especially important during the colder months in many places.

Ferrigno will typically do one or two chest exercises and he’ll do them before arms or smaller body parts. This is a well-known and recommended training principle. The idea is that you want to reserve your energy for the heaviest movements because this is how you build the most strength.

Additionally, doing heavy compound exercises like the chest press also heavily works the secondary muscles such as the triceps and shoulders too.

“Correct form, no swinging, no jerking, focus, connect the mind with the muscles, cherish each repetition”.

If you don’t want to make the Hulk angry, you should also consider stretching at the right time and properly. He says to always stretch after a few sets of a chest exercise and never before. That’s because you don’t want to stretch a cold muscle.

He recommends grabbing onto an object at chest level and leaning forward to get a good pec stretch.

Ferrigno says to start out using lighter weights with every exercise because it’s a different angle.

Ferrigno spoke a lot of truth during the workout session related to discipline and success.

“People that are not successful with their bodies are not really successful in their life.”

“If I never weight trained I wouldn’t be where I am now”.

Bodybuilding and weight training made him very passionate and competitive and gave him the drive to reach his full potential.