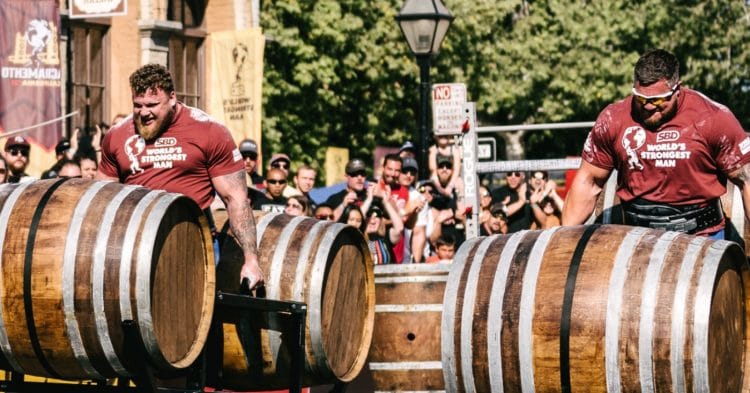 The 2021 World’s Strongest Man, taking place from June 15th-20th in Sacramento, California, kicked off the first day of the Finals on Saturday. When the first two of these events were said and done, Tom Stoltman emerged Looking unbeatable.

Both of the Stoltman brothers made it to the Finals, after a strong three days of qualifiers that left both men needing to win the Atlas Stone-Off to get there. It is just the second time in WSM history that two brothers faced each other in the Finals, with the first time also being with these two.

In Day One of the 2021 World’s Strongest Man Finals, which came in the fourth day of competition, the ten finalists competed in three events: a Giants Medley, the brand new Titan’s Turntable, and a Keg Toss. By the first two events, it was Tom who lead the pack by a wide margin, after winning both events.

A post shared by The World’s Strongest Man (@theworldsstrongestman)

The Giants Medley left the athletes being scored for time, while they did a 440kg (970lb) yoke for 10 meters,  followed by a 350kg (771.6lb) frame carry for 15 meters. In large part, things were closely contested, with the top five having just four seconds of difference between them.

That said, Tom Stoltman made up the biggest differential in his first place win during the event. Although things were tight between he and Luke, who actually got a better start than Tom, but dropped weight which cost him a few seconds.

This was one of the most anticipated events of the 2021 World’s Strongest Man, as it was the first time that it appeared in the contest’s history. Here, the strongmen were tasked with pushing an antique train on a rotating platform, for 160 degrees, which equates to about 30 meters.

Athletes were scored for time here, but that was no problem for Tom Stoltman, who again blew through the competition. He clocked in a blistering time of just 46.89 seconds, which was nearly six whole seconds faster than the second place winner, Trey Mitchell’s time of 52.34 seconds.

With these two wins, Tom Stoltman becomes the first strongman to be ahead by seven points, after two events of the World’s Strongest Man Finals.

Still To Come For The 2021 World’s Strongest Man

At the time of writing the REIGN Keg Toss event is still underway. Tom Stoltman has stated his intentions to set a new record in this event, so we could be looking at a third straight victory for the Scottish strongman by the day’s end.

The 2021 World’s Strongest Man concludes tomorrow, Sunday, June 20th. There are three events left for the athletes to compete in, before the winner of the competition is determined.

These are the events slated for the WSM Finals Day Two:

Stay tuned to Fitness Volt for more coverage as the 2021 WSM comes to a close.