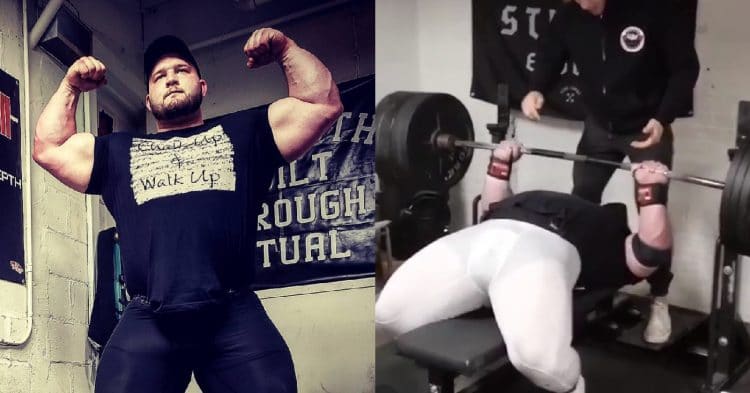 At just 24 years of age, Luke Nall has a lot of time left in his young powerlifting career. As he showed us recently though, he is already setting out to do some incredible things in the sport.

Luke is a young powerlifter, competing out of Bloomington, Illinois. He is still quite early on in his career, having only competed at two meets, both of which were last year. However, as a +140kg athlete, he showed a ton of promise in those meets, which has made him someone to keep an eye on in the future.

That is exactly what we did, which led us to see one of the craziest bench press sessions ever. In a recent post to his Instagram, Luke Nall can be seen doing three different bench press sets. However the highest of these is what turned our heads, as he managed to crush a ridiculous 675lb bench.

To put into perspective just how impressive this is, all three of these lifts are heavier than Luke’s best in-competition bench press to date. So while he did struggle a bit with getting the 675lb up, this is nearly a 50lb jump from his best official performance.

Nall is showing improvements in more than just his bench press though. Here he is, a few days earlier, working on his deadlift. He can be seen doing two sets of 705lb for five reps, which is not too shabby at all.

Given the fact that Luke Nall is so young, not just in age but competition experience, it is safe to say he will likely only get better from here. That being said, he is showing a level of rapid growth that reaffirms the idea that he is someone to keep an eye on moving forward.