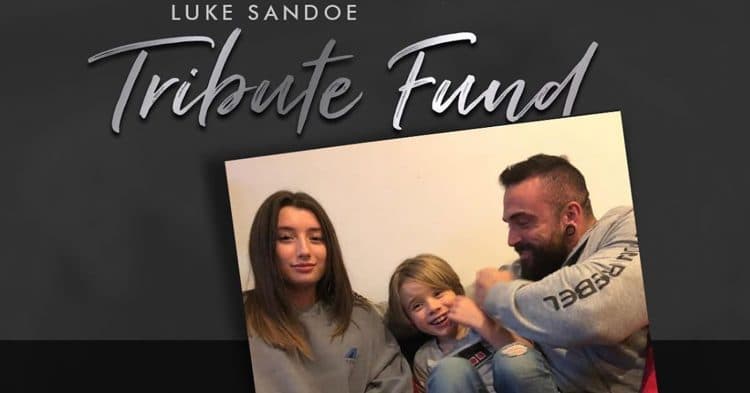 The bodybuilding community was simply left in shock at the news that Luke Sandoe had tragically passed away. Following this terrible news, the entire sport has seemingly banded together, to remember their fallen brother.

Sandoe was one of the most promising up and coming bodybuilders out of England. At just 30 years of age, he shown himself to be skilled enough to hang with the best, while improving constantly. He was only four years into his pro career, but had already built rivalries with some of the best in the sport, due to his incredible skill and ability to grow.

This is why it came as such a massive shock when it was revealed that Luke had passed away. The cause of death has been officially revealed as suicide, but the news was so sudden that it took some time for people to believe it is actually true. However once it became clear that this was not some sort of sick prank, the community began expressing an outporing of support and kind words for their comrade.

Big Ramy gave words of condolences by saying “Very sad news i just received…im very saddened by the death of our iron brother @lukesandoe we will remember you as a great human and a great athlete. ..your great humanity.. Shining smile and your crazy most muscular.. I wish a lots of courage and strength to his wife, family and close friends…we had a good conversation a couple months ago in the gym when we trained next to each other right after the last arnold…i told him how much i looked forward to see him battling it out with the top guys of our division very soon.. And im very sad that it will never happen… But you leave a great legacy my friend…
I wanna take those few lines to talk to my fans…tomorrow is guaranteed to nobody especially during this worldwide pandemic so i want my friends to think about the meaning of life and find their own truth… cause sometimes the rush in life take us away from God… But one day we will be brought back to him.. Know your past to know your future…”

“I’m sorry to hear the bad news today that you are no longer with us @lukesandoe” said Victor Martinez. “First time I saw you on social media training and winning shows my first thoughts was England has produced another @thedorianyates and you just made competition a whole lot harder.The first time I met you was before we stepped on the @arnoldsports 2019 stage and it was an honor sharing the stage.The first time we spoke my impression was what a gentleman. In a short time you left a great legacy in bodybuilding and loved by many not just in your country,but the entire world of bodybuilding. You had the charisma to do so much more. Too young too soon #rip my friend. My condolences to your friends and family.”

The sadness was evident when Flex Lewis wrote “I have tried to write something several times and can’t find the words to do it.
It feels like DejaVu two young men gone long before they should have.
–
I have known Luke for over a decade we were both sponsored by Gaspari, seen him win his pro card and watch his career grow into Signing with RedCon1, Podcasts, and on stage placing 3rd at the Arnold’s- Very proud.
We got closer over the years, and not a week would go by without some shit talk from him. Luke was a very funny guy and his humor I will miss. We rarely talked training, and i knew Luke was a deep guy but I never knew he was hurting.
Rest Well bro.
–
–
–
ANYONE who feels low, with suicidal thoughts or mental illness, know your never alone and to please reach out to someone and talk, there are many professional organizations that want to help.”

“Once I heard the news today of Luke Sandoe’s passing, I truly couldn’t believe it,” Phil Heath said. “As I tried to get answers, the texts, DMs began to flood in and it was then confirmed that one of our Brother’s In Iron passed away. What has hurt so much is that although Luke and I weren’t very close, we did share some cool moments while I was in the UK last July. I can still remember him asking me if i would take a look at his physique as he was preparing for a couple shows prior to the Olympia. During those moments, I realized very quickly just how genuine Luke was and how passionately present he stood there while giving him advice. Rarely am I asked to give an honest critique of a fellow Pro’s physique, let alone from someone who has competed at the Olympia, so feeling this vibe of him being so humble, hard working and intelligent was something special to me. I am saddened at this news along with many fans around the world, but one thing I would like for us to do is continue to uplift his family through positive vibes and prayer as his kids, Louise and Leo lost their SuperHeroDad not to mention his parents, siblings and other loved ones. Luke’s ability and potential was something I wish I could have seen come into fruition because honestly, that was exactly why I even chatted with him in the first place. Damn, this is yet another tough loss, but I will continue to remember you Luke as the Man whom I shared some great times with and will continue to pray for your family. Rest in POWER LUKE!!!!!”

“Feeling saddened and shocked to hear of the passing of Luke Sandoe …..Love and condolences to his family 🙏” Dorian Yates explained.

William Bonac shared a heartwarming memory of Luke by saying “Im still shocked about your passing brother. We have shared the stage and competed against each other several times. I knew from day one that you we’re someone to watch out for.!!
.

I remember backstage at the @arnoldsports 2019 when you started to pump up” I was like 😳 damn bro you going to hurt some people tonight.
I was so pumped up for you’ you remember when I walked up to you right after prejudging and took you apart’ I told you to squeeze your legs by bending the knees a lil’ bit more and to lean on your small toes so we could see more separation in your quads and we were practicing it. Even knowing you were going to place right behind me’ I wanted you to secure that spot and you did.
And in Melbourne when we were late & couldn’t find the stage on top of that we had to pie as well 😅man you were so cool & relax while I was stressing the 🤬out lol and yet we got on time before the show started.
Really going to miss you & your positive vibe bro. My condolences goes out to all your Iron friends and most of all to your family & kid.
Rest in Power my Iron brother🙏🏾💔”

“Mannnn!!” Dexter Jackson proclaimed. “Where do I even start!?? 🤦🏾‍♂️ This shit sucks!! First of all it was an honor standing on stage next to @lukesandoe at the @ifbb_pro_league Tampa Pro. I didn’t know much about @lukesandoe up till then. I thought he was a lil cocky leading up to the show but soon found out that you should never judge a book by its cover. He was such a great guy and i am sadden to hear of his passing. Our thoughts and prayers go out to his family and I hope you’re in a better place my friend. RIP 💔”

“Saddened and shocked by the news of the passing of @lukesandoe,” Roelly Winklaar said. “Glad to have shared the stage with you brother. You will surely be missed!
My thoughts and prayers go out to his family during these difficult times.
May you rest peacefully brother 🙏🏼”

“I woke up to this tragic news and I am in state of shock,” said Milos Sarcev Our brother of iron Luke Sandoe @lukesandoe died at the age of 30. My sincere condolences to his family, loved ones and especially his 15 year old daughter and 8 year old son. RIP Luke 🙏🏻❤️💪🏻. You’ll always live in my heart. (The last time we saw each other at the 2020 Arnold Classic 😔)”

“I didn’t know luke sandoe in person,” Lionel Beyeke explained. “But I feel concerned by this terrible loss. it was really a terrible shock when I learned of his death. what a drama. I ached deep inside, as if it were my brother. we don’twe are only a vapor which rises and which goes away. all my prayers are for these loved ones and their family. rest in peace my friend .”

“I just wanted to come on and express my sincere condolences to the family, the friends, the whole community on the passing of Luke Sandoe,” he said. “It’s unfortunate. I got to spend some time with Luke when I did my tour in 2018, and he was a super super nice guy. It’s very unfortunate for the community. Such a sad situation and crazy times.”

In addition to these kind words, a fundraiser has been set up for Luke Sandoe’s family. If you would like to donate you can visit the link here. This will allow for some support to his wife and children during this challenging time.

To hear this tragic news is really difficult for everyone. Luke Sandoe seemed to be a wonderful person and a bright spirit. His presence will most definitely be missed in the sport.