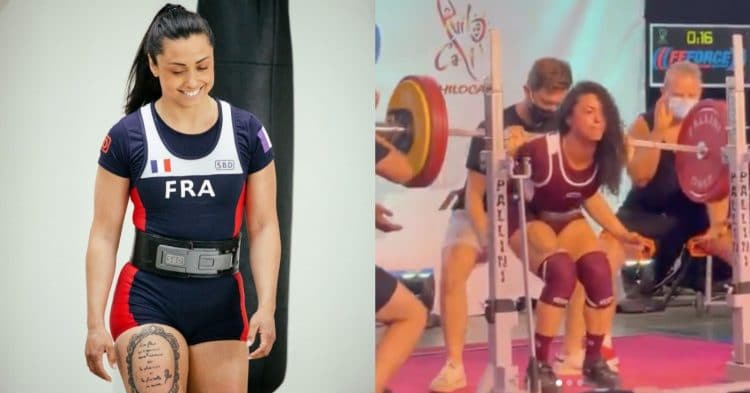 As a 63kg powerlifter, Lya Bavoil has already established herself as one of the best in the world. However she recently jumped up in weight at the FFForce 2021 French Nationals, and walked away with a clean sweep in French records.

Bavoil is one of the most promising powerlifters in the world today, with a ton of accolades on her young but extensive resume. With just six years of competition under her belt, she has already reached some of the highest highs in the sport, with some incredible performances in the European powerlifting scene.

Now the 27-year old is back at it again, this time competing at the FFForce French Nationals, as she explained with a post to her Instagram. Here she can be seen scoring four national records in the 72kg division, competing up from her usual weight class and weighing just 64.9kg.

Here are Lya Bavoil’s best lifts from the French Nationals:

“For the first time, i didn’t cut for an official meet in my normal weight class as a 63. I decided to compete as a 69 🙂

Congratulations to all the athletes ! It was awesome to share the platform with all of you girls ♥️”

This was an incredibly impressive performance from Lya Bavoil, who looked better than ever at this increased weight. She said that this was her first time not cutting weight for a contest, and it seems that those extra few pounds did her a bit of good.

Not only was this a clean sweep of French records, but it was also a clean sweep of personal bests for Lya, at least in terms of competition. While it was at a heavier bodyweight than the roughly 62kg that she normal competes at, it shows just how strong she has been getting lately.

It is unclear whether or not Bavoil will continue to compete at this weight class, or move back down to 63kg division for her next meet. Either way though, fans can expect to see some more insane lifts from her, whenever she competes again.

With a multitude of French National victories on her resume, it is hard to deny Lya Bavoil being the best powerlifter in her weight class, from that country. That said, it would be exciting to see her return to IPF competition, to see if she can improve on her third place score at the 2019 World Classic Powerlifting Championships.