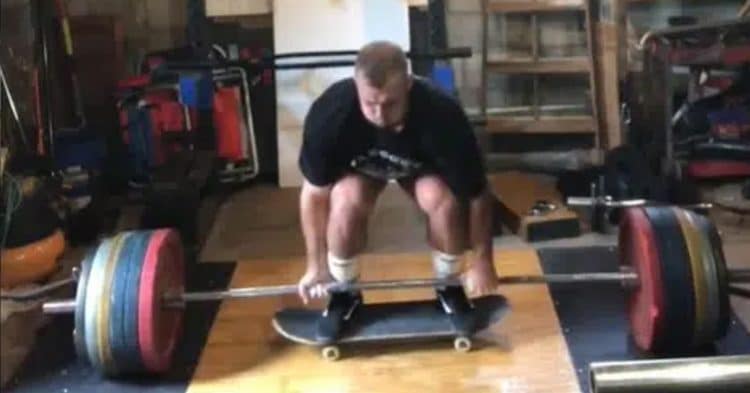 You can consider this article as your “daily dose of internet” where you find people you never heard off doing the most random, insane, pointless(but amusing) stuff on the planet.

Today, we talk about a relatively unknown YouTuber called “Mikey Mac O’Brien” or as he goes by on Instagram; mikeymaybeme. From little drops of info Mike has put on his social media, he goes to Kutztown University in Pennsylvania and is a member of their wrestling team (which would put him in the 19-22 age range) and this is basically where the trail ends when it comes to his life outside of social media.

However, when it comes to social media, Mike has been doing unconventional but very impressive lifts for the purpose of youtube and Instagram for the past 2 years. One of his most famous lifts is a 225lbs deadlift with a 225 lbs safety squat bar with 100lbs of plates on a dip belt on his waist. Which looks as ridiculous on video as it sounds in theory.

Recently he outdid himself by performing a 300lbs trap bar deadlift with a 210lbs safety squat bar while dangling 245lbs from a dip belt on his waist. Which…I don’t even know where to start to describe, you just have to see it.

But all that is child’s play compared to his latest and most viral lift; kickflip into a 500lbs deadlift. No, this isn’t a fancy “THPS” move(would be awesome if it were, though) but something else.

His epic skate-lifting(just coined the phrase) has gathered praise from fellow social media crazy people Jujimufu, Eric Bugenhagen (WWE’s “Boogez”), and even Barstoolsports who have reshared his post giving the representative of next-generation youtube insanity a big boost.

Now, before I start my obligatory rant I really need to clarify that I actually enjoy watching this type of stuff. I even tend to share it to my friends and joke about it in a positive way. Hell, I’m even tempted into recreating it myself if I wasn’t 100% sure that my clumsy ass would destroy every bone and ligament in my body doing something this crazy.

Now with all that out of the way, here’s my rant; this is exactly the type of stuff I despise(i know what I wrote a few sentences back, it’s a love/hate relationship) about Instagram fitness. It’s just a continuous upping of the ante. It’s not enough that you bench press 100kg or deadlift 200kg, you have to do both at the same time while jumping out of an airplane. By 2021 this unwritten rule turned into an endless cycle of “oh yeah? Well, get a load of THIS!” that will ultimately lead to dudes crippling themselves while performing unnecessary crap.

A few years back Calum von Moger tore his bicep while tandem curling 300lbs with Chris Bumstead. Something as basic as bicep curling triggered a series of unfortunate events that led him to even more injuries that had him sidelined from lifting and competing for about 2 years in total. A few months back, Ryan Crowley, a rising bodybuilder with a tonne of potential went incline benching with Larry Wheels and strapped on 5 plates a side and you’ve all seen the aftermath of that by now.  I once tried the Arnold bent-over row while standing on the bench and ended up with a broken foot…and that  wasn’t even for social media clout. I just wanted to be hardcore like Arnold was(and still is).

The best thing is, both Calum and Ryan did normal gym exercises which are perfectly safe when performed properly. Both guys just had a good case of  underestimating the weights. Now imagine what can go wrong when you’re juggling chainsaws while squatting on a Bosu ball.

If you are an aspiring fitness YouTuber, just think twice before performing goofy shit for the views. It’s all fine, dandy, and girls like you until you end up dropping 300lbs on your neck and you end up on gym fails or worse.