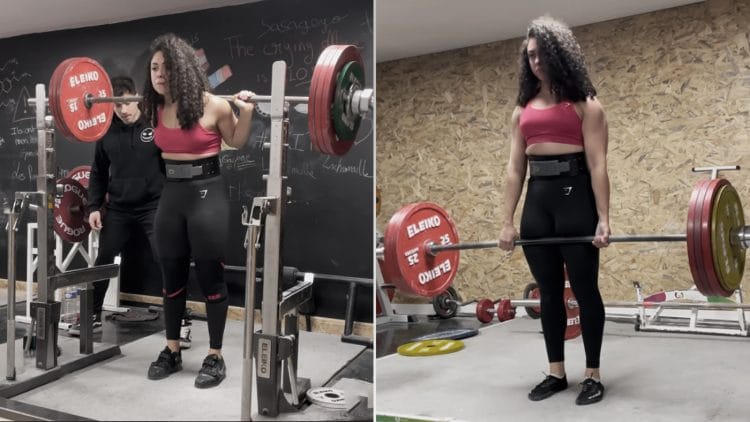 Elite powerlifter Prescillia ‘Lya’ Bavoil recently cranked out 512.5kg (1130lbs) total during a training session in the gym. Following the first-place finish at the 2021 European Classic Powerlifting Championships on December 3rd, Bavoil took a break from training and diet. Returning from the vacation with weight gain, she admitted to not being comfortable with the way she looks. However, it did not stop the 28-year-old from making impressive lifts.

Lya Bavoil lifted a total of 512.5kg (1130lbs) during the training session. She posted the video of her lifts on her Instagram account and shared the break-up of the lifts in the caption.

“Top set SBD Training
.
Squat : 197.5 kg
Bench : 110 kg
Deadlift : 205 kg
.
After Europeans, i took a little break from training & nutrition. I put on weight … holidays gain 🙃 i’m around 67 / 68 kg rn and .. tbh i do not feel confortable the way i feel & look… but that’s okay ! I have no regrets for overeating because sometimes it feels great to just let go. So.. let’s start over again ! Nutrition track & Off Training season. I’m Ready for it,” Lya Bavoil wrote in the caption to her post.

In the caption of her post, Lya Bavoil revealed her body weight to be around 67-68kg. This means the 205kg deadlift was 3 times her bodyweight while the 197.5kg squat was nearly 2.9 times her bodyweight, which makes it an impressive feat. However, the lifts were nowhere near the raw world records she recently set.

2021 has been a year of achievements for Lya Bavoil. Competing in the open division at the 2021 IPF World Classic Powerlifting Championships, she broke the world records for raw squat, deadlift, and total en route to a first-place finish.

Here is the breakup of Lya Bavoil’s lifts from the competition:

Apart from the IPF World Classic, Lya Bavoil also scored impressive wins in five other competitions and concluded the year. Her latest win came at the 2021 European Classic Powerlifting Championships that took place in Sweden on 3rd December 2021.

Lya Bavoil is considered among the best powerlifters of the current generation and her recent lifts in training solidify the fact that she might be heading into another year of accomplishments when 2022 kicks in.