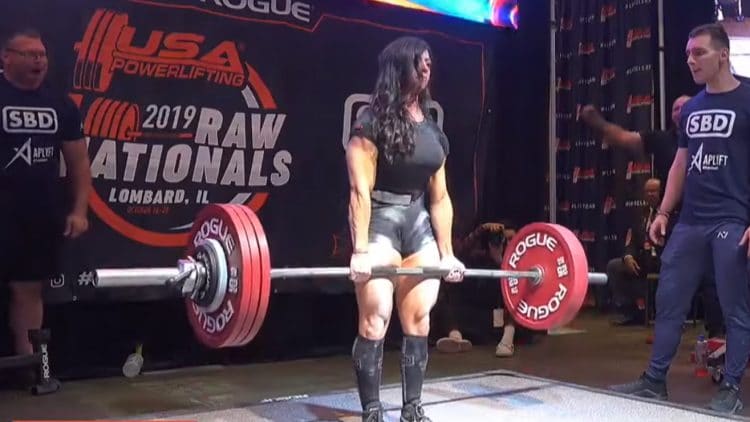 Marisa Inda showed up to show out at the 2019 USAPL Raw Nationals (October 16-20) last night when she nailed an American record in the deadlift by pulling a huge 190kg weighing in at only 52kg. This incredible performance not only earned her an American record but she also won the competition in her weight class which makes it the fifth victory for her.

Andrea Riley finished in second and Andie Hernadez came in third place, and so far, the Raw Nationals are shaping up to be an exciting event.

These are her numbers from the competition…

Check out Marisa Inda’s record deadlift below at the 3:03:31 mark…

Inda successfully powered through 170kg on her first attempt and then 180kg for the second before hitting the record 190kg deadlift. She also set the Raw deadlift American record back in 2017 by pulling 187.5kg  at the Arnold Grand Prix.

So, this lift was an amazing accomplishment for her and especially since she got her fifth win at the Raw Nationals. But we’re sure she’ll be back for more competition to test her limits even further.

But Marisa wasn’t the only competitor who set an American record as Russel Orhii accomplished this feat in the squat (313.5kg). But he also finished in first place with an 828.5kg total after achieving a 192.5kg bench press, and a 327.5kg deadlift along with his record squat performance.

Now, there are a few days left of the USAPL Raw Nationals which will include several other elite competitors battling for top spots like Meghan Scanlon (63kg) and Jonathan Cayco (93kg) who will be taking to the stage Friday night.

Congratulations to Marisa Inda for her awesome American record-setting performance and be sure to stay tuned for more updates regarding the 2019 USAPL Raw Nationals.

Check here for how to watch the events online.