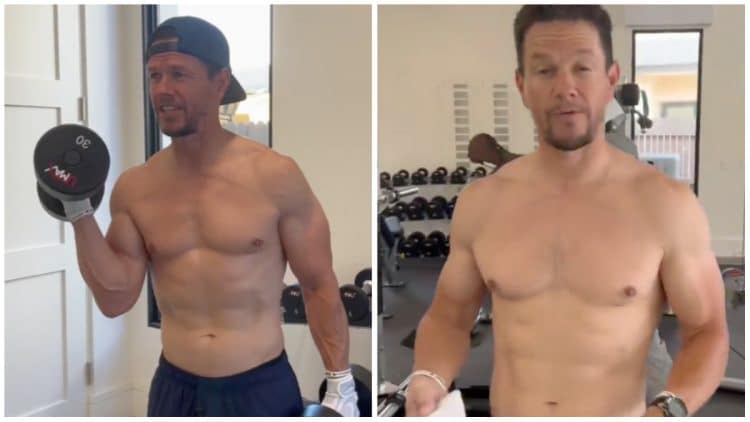 Mark Wahlberg is known to be a man of many talents. He gained popularity by entertaining the masses through different mediums such as music, television, feature films, and more. In a recent Instagram post, the 51-year-old Wahlberg showed off his lean physique during two workouts in a single day.

Starting his career off as a teen actor, his 1992 photoshoot with the brand Calvin Klein skyrocketed his status as an iconic fitness model. Wahlberg is one of the few who transitioned well into the later stages of life, maintaining the chiseled body he found fame with. His evergreen physique continues to be a source of inspiration for others and the actor has proven his dedication to staying fit by sharing regular updates with his fans.

‘Marky Mark’ accepted a big challenge last year when he took on a role that required him to bulk up for the film, Father Stu. Starring as a boxer who improved his life by becoming a priest, the ripped star had to gain over 30lbs in just a month for the movie. Wahlberg reportedly consumed over 11,000 calories a day in preparations for the role. Following the completion of the project, Wahlberg made it a priority to get back into shape by shedding off the extra pounds he had put on. He completed his transformation successfully to return to the muscle-bound athletic look he’s been famous for since the early 90s.

Mark Wahlberg Shows Off his Lean Physique During a Recent Workout

In a recent Instagram video, Mark Wahlberg shows off his ripped build while performing standing bicep curls in warmup before the workout.

“After this workout, we’re going to F45 in Vegas baby,” he said. “This is just a little warm-up, little cardio, little abs, and then F45 for the greatest workout.”

While one workout would be enough for most people, for Wahlberg, it’s just a part of his warm-up routine. He followed up with a second video where he was at F45 to get another workout in.

“Got a little pre-workout before F45 and I just played golf,” he said. “But I’m going to wear my golf shirt, with a collar, to the gym. This thing is a multi-purpose t-shirt, a golf shirt. Actually, I can wear it to work, wear this to a movie premiere.

“Best workout in the world, the reason is anybody can do it at any level of fitness. You have to understand you got world-class athletes in there getting squished in 10 minutes because they’re trying to go so hard. Then, you got people who are in the beginning stages of their fitness, and they’re absolutely killing it. Whatever their fitness goals were, they quickly surpassed them.”

During the pandemic when many gyms across the nation had to shut down their operations, Mark didn’t stop working out. He hosted an online workout event on Instagram Live. Mark took special care to make sure the event was inclusive as no equipment was needed for the workout.