After TikTok user @Calis_Alex fired off a handstand in the gym, an angry onlooker told him to 'do that shit at home' 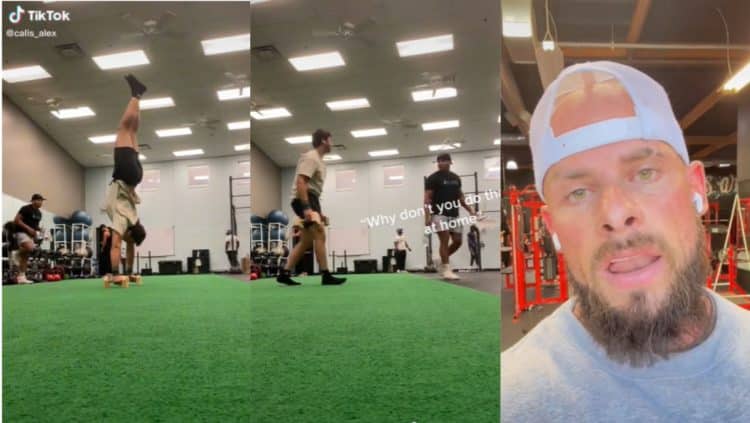 Fitness influencer Joey Swoll is back in the headlines eager to correct toxic gym culture. Following a viral TikTok video, Swoll reacted to an angry man who took issue with a gym-goer practicing a handstand.

The interaction was featured on TikTok user @Calis_Alex’s channel and Swoll’s TikTok. During the video, Alex is seen performing a stationary handstand. As the TikTok user caught his fall, he was berated by another man who told him to ‘do that shit’ at home. While the confrontation didn’t last long, it demonstrated some of Swoll’s concerns with the way people behave at public gyms and fitness centers.

“Sometimes people are just miserable, and they want to ruin someone else’s day.” Joey Swoll said.

The video in question has garnered upwards of 1.4 million likes and is still climbing. TikToker Alex was the first to upload the footage and added the hashtags #calisthenics #joeyswoll and #rude to the bottom of his video. Swoll’s fight against toxic gym culture continues to gather steam, and it seems every other day he is tagged online in hopes of calling out people who lack common gym etiquette.

Joey Swoll to Rude Gym-Goer: ‘To Treat Someone Like This Is Completely Uncalled For’

Following the viral TikTok video, which can be found here, Joey Swoll gave his take on the hostile confrontation.

“You know, this is really sad to see, not just at the gym, but everywhere. For someone to treat someone or speak to someone like this, completely uncalled for. I immediately reached out to Alex, the young man in the video, and I just let him know: hurt people, hurt people.

He did nothing wrong. To not let it absorb him and to not let it affect his love or passion for the gym or his contest. I’ll tell you what’s pretty cool, to see so many people like and comment on that video, supporting him shows that gym culture is changing and you all are the reason why. Thank you. Keep doing it.” Joey Swoll shared via TikTok.

Keep doing you brother! I love seeing all the love and support for you! @Calis_alex

Swoll added that TikTok user Alex did ‘nothing wrong.’ In light of the support Alex received in the comment section, Swoll reiterated that the movement to change toxic gym culture is alive and well. Take a look at what some commenters said under Alex’s video:

“I mean the grass area is mainly for calisthenics” one onlooker wrote.

“BET THAT DUDE CALLS HIMSELF AN ALPHA” another shared.

“He just mad he can’t do it” a TikToker wrote.

“He’s insecureee don’t stop yourself from doing what you love just for other people, so keep doing it.” another person commented.

Public gyms are a cesspool for hostile interactions. In an age where every person has a camera attached to their smartphone, anytime a moment of aggression pops off, it’s recorded and uploaded to the internet. Sometimes these situations aren’t so black/white, however.

Last month, a female TikToker accused an older gym worker of staring at her while she worked out. After she called the gym associate a ‘pervert’ for witnessing her undress, Joey defended the man’s actions and said there is an obvious difference between glancing and staring. In addition, Swoll highlighted the danger of calling a man a pervert as it can damage one’s reputation in an irreparable manner.

Back in April, Joey revealed his movement to change toxic gym culture was on the rise. Another TikTok user tagged Swoll in a video depicting a woman upset that no hot people were working out at her local gym.

Joey had a problem with the statement and her recording people in such a negative manner. Gyms and fitness centers are shared spaces and Joey believes people should have the right to go to the gym and not be recorded.

After practicing calisthenics (gymnastic exercises), TikTok user Alex was taken aback by the rude gym-goer. In Joey’s opinion, Alex did nothing wrong, and added that he hopes the TikToker will continue to work out at public gyms.