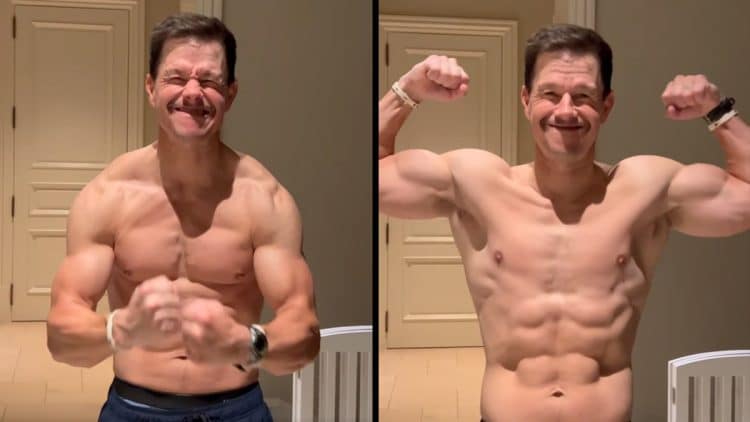 Hollywood sensation Mark Wahlberg recently showed off his toned physique in a shirtless video. Wahlberg is known in the fitness circle for his disciplined lifestyle and maintains an impeccable physique all year round. The 50-year-old routinely shares glimpses into his fitness regime on his social media accounts.

Wahlberg shared the latest physique update in an Instagram video and whispered the promotional message. In the caption to the post, Wahlberg joked that he had to whisper instead of speaking out loud to not upset his wife by posting a shirtless video on social media. Courtesy of Mark Wahlberg’s Instagram account, you can watch the video here:

“Had to whisper to not upset my wife for not wearing a shirt. 😬 Go check out all 60 of our all-natural sports nutrition products to help you on your health & fitness journey. Stay inspired and let’s go!”

Mark Wahlberg wrote in the caption to his post.

Obviously, the caption received a response from Mark Wahlberg’s wife Rhea Durham. She laughed the caption away with a series of emojis. Wahlberg had undergone a reverse transformation to prepare for a role. However, looking at the physique update, it seems that the 50-year-old has gone back to being himself once again.

Over the course of his career, Mark Wahlberg has undergone numerous physical transformations for different movie roles. Wahlberg will play a boxer-turned-priest in his upcoming movie Stu and gained a massive amount of weight to fit in the role. However, he admits that rapidly losing or gaining weight has become difficult with growing age. During his appearance on The Tonight Show in July, Mark Wahlberg spoke on the difficulties of physical transformation and said:

“Once the metabolism starts to slow down, it gets really difficult. I was trying to get this movie made for six years, we only had 30 days to shoot it, and so I wanted to really make it happen,” Mark Wahlberg stated.

“And (I) was also crazy to have financed a lot of it myself. So I knew I was on a ticking clock on my own dime, and you get things done pretty quickly when that’s the case,” Mark Wahlberg added.

Mark Wahlberg also spoke about his diet to gain weight for playing the character in Stu and said:

“Unfortunately, I had to consume, for two weeks, 7,000 calories, and then for another two weeks, 11,000 calories. Even when you’re full, I would wake up after a meal and have another meal. I was eating every three hours. It was not fun,” Mark Wahlberg said.